With diversity of excursions in Tenerife it the most beautiful place to visit as a Canary Island.  It is the among the seven Spanish islands of Canary archipelago which receive the highest number of tourists from all over the world, it is also the largest island in Spain. The island has spectacular views of the beach and volcanic. This only, as made the island be famous and attract thousands and thousands of tourists from all over the world every year.

A visit to Teide National Park is among the most spectacular and impressive tours you can do. It has been declared so by the UNESCO. You can book a cheaper tour by bus, hiking tour or private VIP tour, so you will have a perfect overview of the nature of Tenerife Island. From statistics, this park is the first visited park in Spain and Europe and the ninth in the world. It has volcanic rocks as well as extraordinary biodiversity as a result of a wide range of endemic spices. Each day the park admits thousands of travellers from over the world who come to view its almost extraterrestrial wonders. 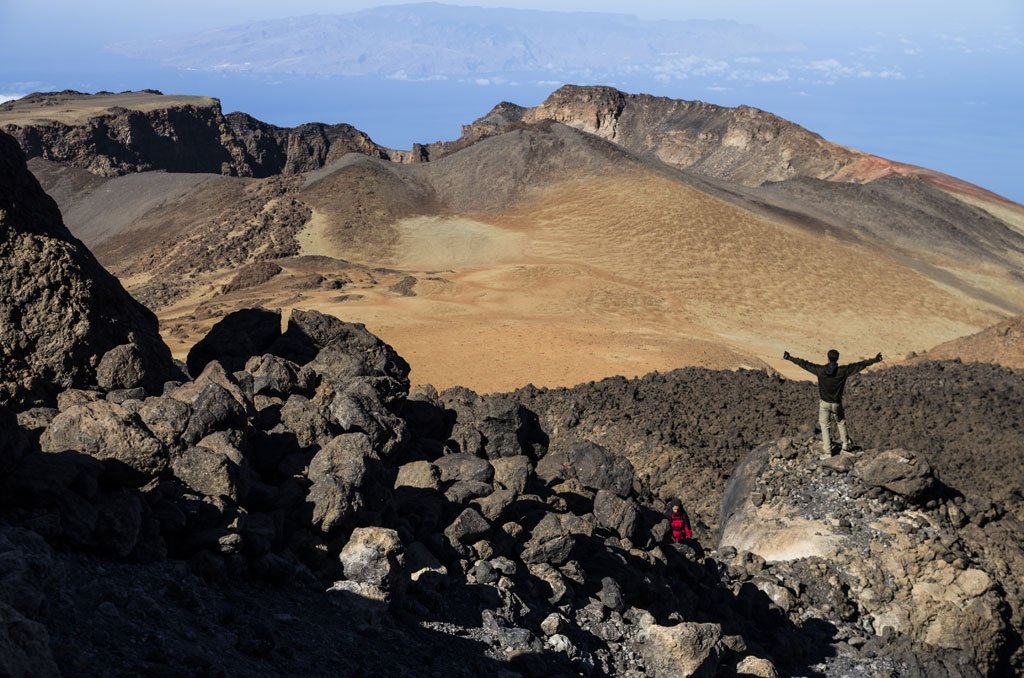 The National Park crowned by the largest mountain in Spain - Mt. Teide which is biggest Tenerife volcano. By visiting this park you have a good views of this volcano and you also getting to see the unique rock formations in the park like Roques de Garcia formed by movement of tectonic plates. These are just a few examples of what in the Teide National Park, so you can check out available excursions in Tenerife and book it today to have your experience guaranteed.

There are many options in the way you explore the Park. You can even choose to hike the Peak of Mount Teide using cable car with a special permit to the summit. Tour providers may pick you up nearby your location or directly from the hotel in Tenerife, depend of the kind of excursion, to take you to this outstanding park in Tenerife.

Boat trips in Tenerife are another major kind of excursions in Tenerife to engage to. There are places in the beaches of Tenerife where require you to explore while in a boat. These boat trips give one ability to explore the caves in Tenerife, watch as dolphins and whales swim along the boat, snorkel and experience the breezing conditions in Tenerife beaches. There is a number of kinds of boat excursions in Tenerife differing on the kind of boat you hire or board. You can choose a private boat charter in Tenerife or a boat trip where you are sharing space in a group and go together. The number of people a boat can accommodate is also a factor which determines the quality - as less people on board as better experience you will have. 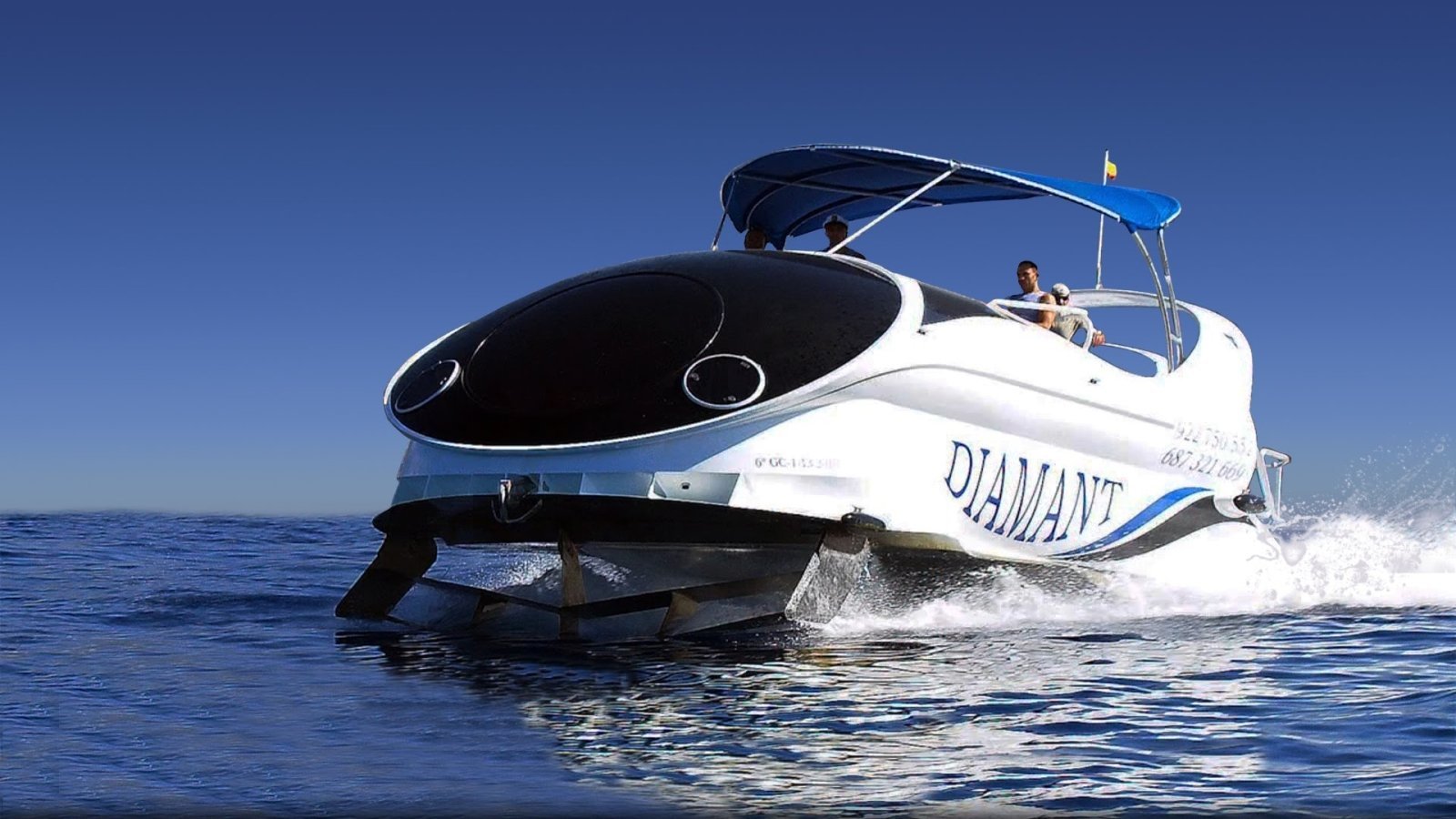 Some of the things you will feature in the boat trip are: snorkelling, swimming, sunbath on the boat, watch whales, dolphins or even have a submarine boat trip to watch underwater marine life in Tenerife. Other boat excursions in Tenerife gives you a chance to swim by remote beaches. As you along the boat you will have a good view of the Tenerife Island at large.

Most of boat trips starting from a few different marinas of Tenerife like the port of Los Cristianos and Puerto Colon in Costa Adeje. With these boat excursions you will also have a chance to see the beauty of Tenerife from the other perspective. An example of cheapest boat trip is the Bonadea catamaran boat trip. It is two hours boat trip where you will observe the whales and dolphins in the ocean of Tenerife. The boat will take you where pilot whales live. You will go approximately 3 miles from the coastline with this excursion.

Other examples of perfect boat trips are Freebird catamaran boat trip, luxury boat excursion on Opera-60, Maxicat catamaran taking you to Masca Bay, the highest quality Ayla boat trip or pilot whale and dolphin boat trip with Arriro-Kosamui yacht. There are so many amazing boat excursions in Tenerife that suits everyone preferences. Have your experience today and have a story to tell. 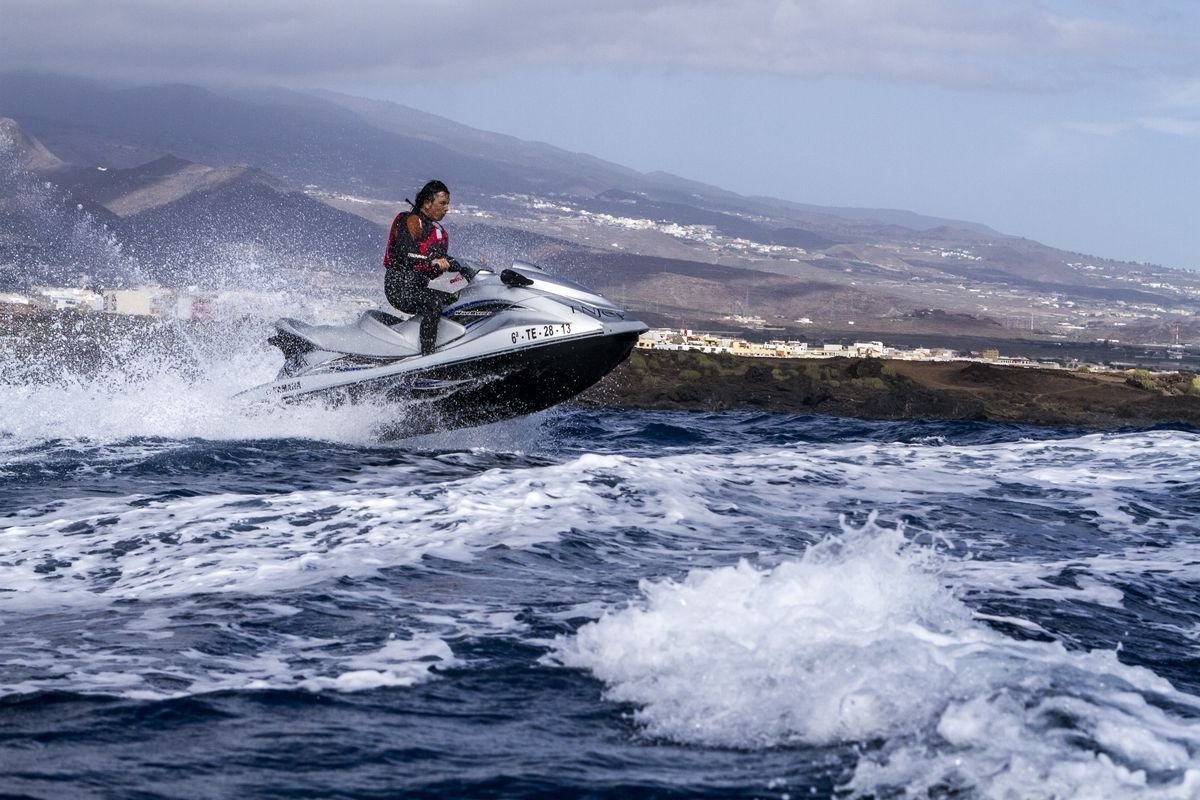 You can book at TripsPoint different Jet Ski tours, Jet Ski safaris and circuits and have a race along the coast of Tenerife or by the beach. Jet Ski tours are simply fabulous and you can on safari along Tenerife beaches exploring various parts like the caves and see dolphins. 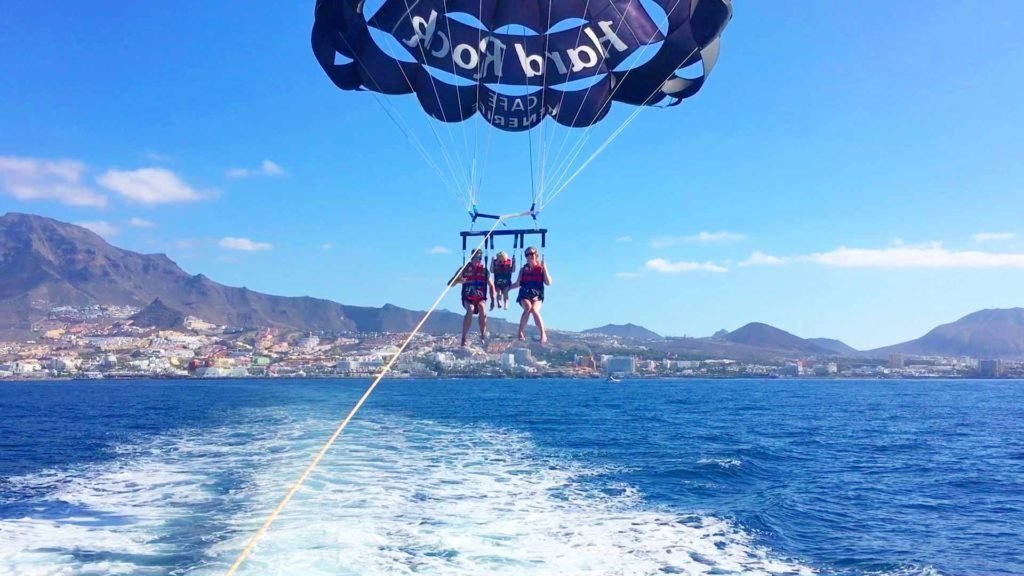 Parascending in Tenerife is a lifetime experience and water sport you can engage no matter are you young or older person. You will fly with a parachute up to 100 meters high along the ocean. You will have an incredible view of the island. There are crews in place to assist you in this fascinating moment and you will have a safe flight. 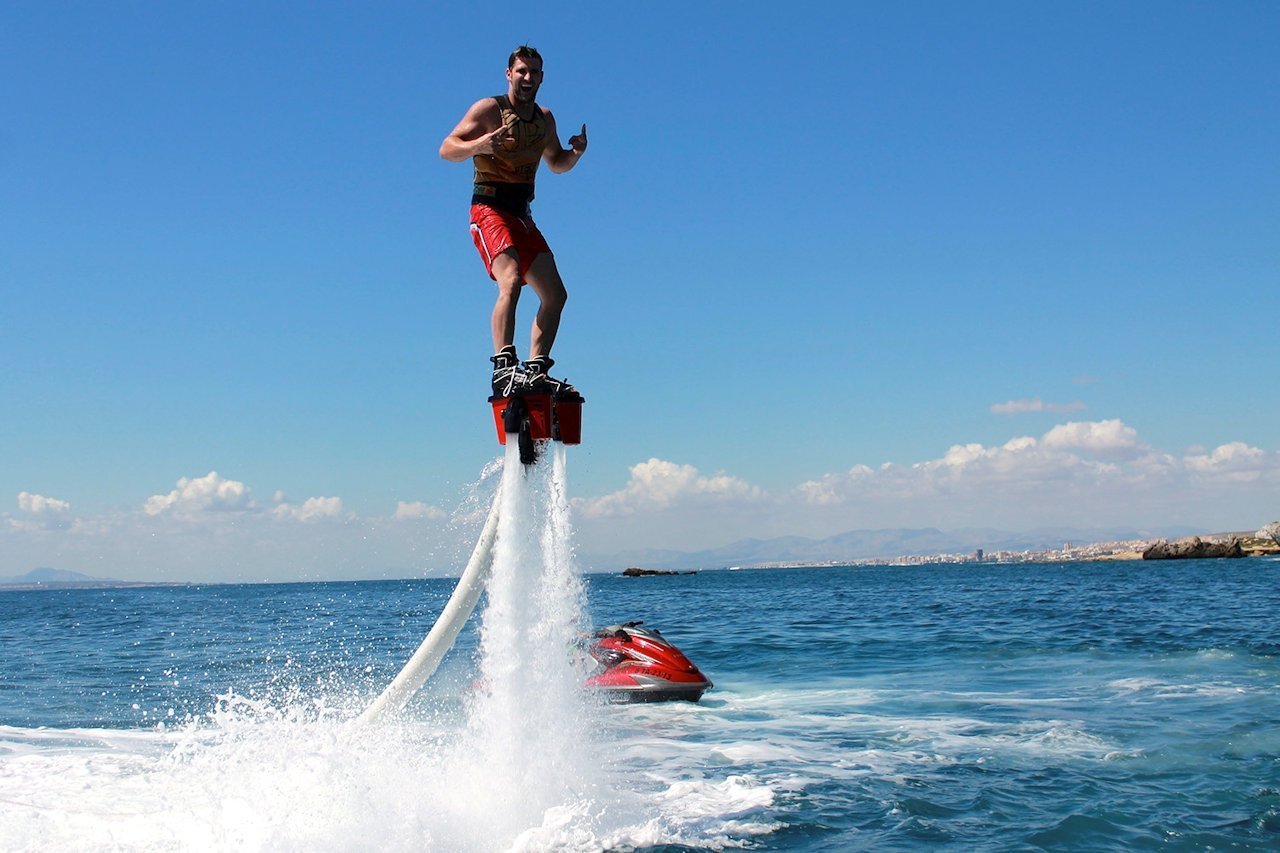 This water sport is just amazing as you will have an experience to be as a dolphin. It involves flying on a bolt device connected to a powerful motor of a jet ski. There is a handheld stabilizer in place and there is also a long hose that connects to the water jet which routes you. FlyBoard in Tenerife is a spectacular experience to be involved in this kind of water sport as you do your excursions in Tenerife.

These are just some examples of water sport excursions in Tenerife and in the main water sports destination there are much more water sport things to do in Costa Adeje. All these water sport are in place at Tenerife and gives you an enjoyable time. Make bookings online today and get guaranteed exciting time on vacation for yourself.

What makes Tenerife so popular for excursions and active holidays?

Tenerife has been a tourist destination for years now and is to date. There are a number of factors that make it so. Tenerife meets world standards such that all the places you will visit in Tenerife have all qualifications required. This includes the hospitality and safety measures put in place. Hotels in Tenerife are world class so accommodation is not a problem in Tenerife Island. In Tenerife, there is something to do for everyone. There are so many areas and micro climates you can get involved in and enjoy your vacation holiday in Tenerife.

Booking of excursions in Tenerife is easy and accessible online - explore the list of the best selection below. There's something for everyone and all tour tour providers are supervised by TripsPoint, so it's a guarantee you will have a nice end enjoyable experiences in Tenerife, escaping tourist traps. You easily choose your excursions to do online and get all the information on the tour pages.

Infrastructure in Tenerife is well developed. There are airports, roads connecting the island and ferries to transport you to other islands. This makes all areas of Tenerife accessible. The roads also connect to the parks of Tenerife. There are quite a number of beaches in Tenerife so you will travel to different beaches experiencing the uniqueness of each beach. Even if you choose a whole year in Tenerife to experience difference beaches you never get bored of them. This also provides a chance to make a choice which beach pleases you.

Excursions in Tenerife offered by local tour operator on TripsPoint are of high standard and of high quality. It because TripsPoint supervisors check the quality and level of service on a regular basis. It's time to take your family or your friends on a holiday to the island and get together on excursions in Tenerife. You will have a story to tell for months as you will discover the beauty of Tenerife and other amazing things that make Tenerife a central attraction of Canary Islands.