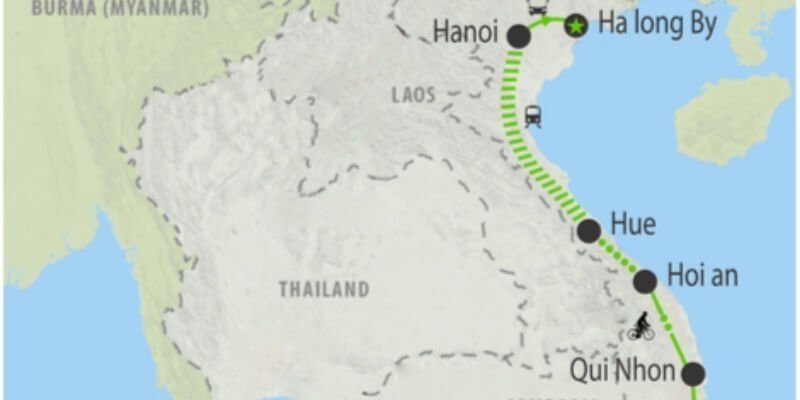 14 days Vietnam Cycling Tour, Don’t just cast yourself on Vietnam’s most popular tourist destinations and sites but also get a perspective on how the rest of the country ticks by touching base with places that find only a brief mention – if at all – in travel guide books. Get a deeper, more profound understanding of the country as people and their lives become more accessible with nothing between you and them but a shared curiosity and a bike. And no – despite the notorious traffic situation in Vietnam, you won’t be constantly squeezing your brakes the way you’ve imagined. 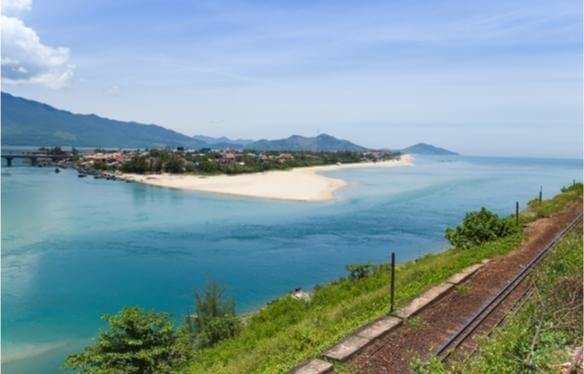 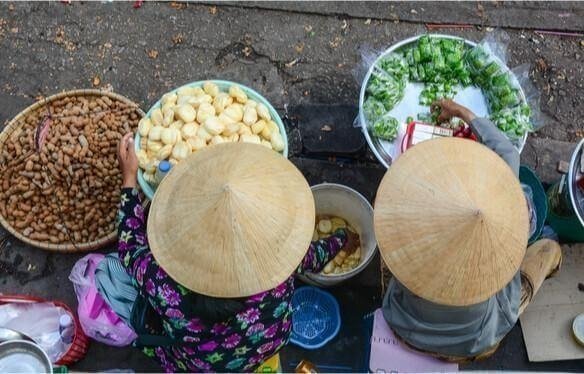 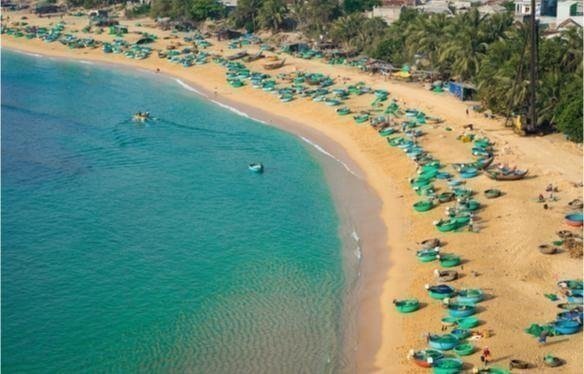 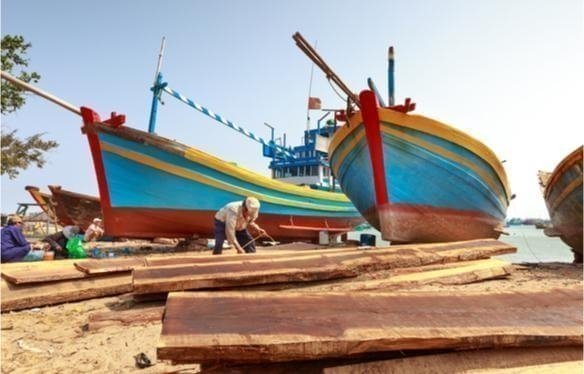 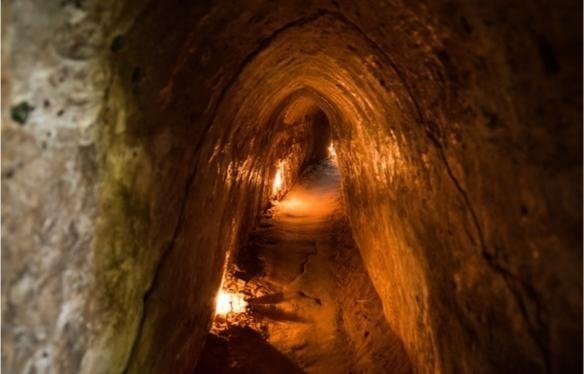 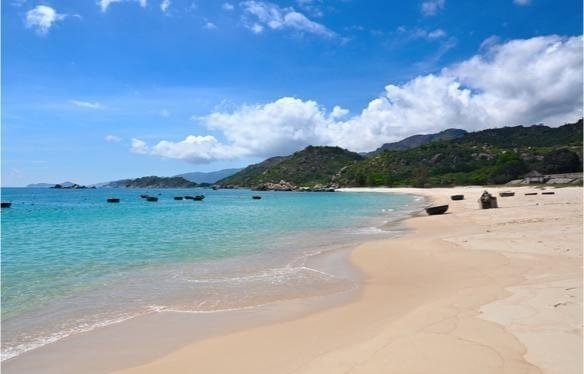 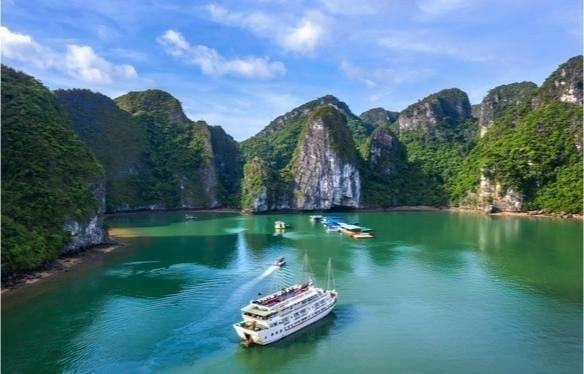 Welcome to Saigon! Settle in at your hotel during the day and later at 6 in the evening, meet your tour leader for a brief lowdown of the tour. Once you’re done with the formalities, follow him/her around the neighbourhood to get a sense of the place and also sink your teeth into the first of many Vietnamese fares.

It’s time to test your wheels as you head off to Ben Tre in the morning. Fringed by green surroundings, cover the first 25 kms of your ride by rolling to a stop at intervals and witness the villagers go about their daily tasks of weaving mats out of coconut straw, as well as sucking on the famous coconut candy made here. Negotiate your way on board a traditional sampan after lunch and when you tread terra firma on the other side, continue on your bikes to Le Jardin du Mekong, your accommodation set in the midst of orchards.

After a hearty breakfast, supplemented by a restful night and a quiet, peaceful morning at the lodge, make for the Cu Chi Tunnels to learn the ingenious methods employed by the Viet Cong soldiers to evade American troops during the war. Get a first hand experience of the tunnels by walking through one of its sections, which in itself were a part of a large network and served as a veritable underground city. Once you’ve had your questions answered and satisfied your curiosity here, swing back onto your bike and head for Saigon.

Steer towards the north of Saigon, past villages and a rural backdrop, to ultimately halt for the night at the laid back, coastal town of La Gi.

Thread your way along the La Gi coast for a warm up ride of approximately 20 kms and then take a transfer to Vinh Hy, one of those gems ferreted secretly away from the prying eye of tourism. Once you get to Vinh Hy, get out on your saddles again and pedal through a jaw dropping landscape bordered by mountains, a blue expanse of the sea, green grape fields and salt flats until you reach Cam Ranh, your halt for the night.

Take a break from cycling today and spend a lazy day combing the sandy white beaches or exploring the area around Cam Ranh Bay. Make a splash in the clear blue waters or cast an eye over the coral reefs as you go snorkeling. Polish off the afternoon by listening to the lives of the locals here as you eat your traditional lunch – prepared by a family that owns a fish farm – clean off your plate.

Extract just a little bit more out of Cam Ranh in the morning as you bike around the area to sample more of the simple life around here. Transfer to Vung Ro, another equally attractive bay with three mountain ranges converging upon it. The starting point of the second half of your ride. After riding through 50 kms, most of it along some spectacular scenery, hitch a ride back on the van all the way to Quy Nhon, where you’ll be bunking down for the night.

Largely escaping the radar of tourists, Quy Nhon is a delight with its coastline marked with pristine beaches and sea dotted with fishing boats bobbing and swaying hypnotically as if replicating the city’s steady, unhurried pace. Catch these sights and those of the traditional aquaculture methods practiced in the Thi Nai lagoon in the morning before setting your sights on Hoi An.

Wake up to explore the treasures of Hoi An as you follow your tour leader along the nooks and crannies of this ancient town shaped by the cultures of France, China and Japan. An important port a few centuries ago, Hoi An still preserves not less than 800 buildings that stand witness to its history and age. Work your way around to those that are accessible to public or just wander through this charming town, gazing every so often at the many shrines, pagodas and especially the Japanese Bridge that swings across its canal. For those still itching to get on their bikes, however, Hoi An harbours some of the most beautiful scenery and beaches within its surroundings that’s ideal for cycling. Check with your tour leader on how to approach these as well as the other options that are available during your time spent here.

Today is the longest day in the saddle, and yet one that doesn’t feel like it because of the spectacular scenery that accompanies you as you crank up the gears and edge up to the crest. A strip of beige sand heads off the sparkling blue waters on one side and a sea of green forest covers the other, while the mist covered hills watch your steady progress. Once, over the Hai Van Pass, wheel it over onto the smaller roads, taking a break at the picturesque Lap An Lagoon and then continuing through the countryside, past tiny villages before calling it a day at Hue.

Founded in 1601 and constructed later in the 1800s the Thien Mu pagoda is an indicator of Hue’s importance during the old days. Saddle up and hit this site, taking in its interiors as well as the views of the Perfume River before riding to the Imperial Citadel to get a deeper insight into the world of kings, queens and courtiers who walked along the palace walls, temples and shrines. There’s still a lot to do here in Hue, including a visit to the Tu Duc Tomb or just wandering around the ancient streets and sampling the food and markets in equal measure. Take pointers from your tour leader to ascertain what fits in your schedule before you board that overnight train tonight that sets you up for your next destination.

You’ll be arriving quite early in the morning at Hanoi so make directly for your hotel where you can freshen up and have breakfast before journeying on to the spectacular Halong Bay. Board your cruiser and enter the magical realm of karst mountains rising resplendent from ethereal, emerald waters. If the weather permits, take a dip in these waters or slice through them with your paddle as you kayak under caves and other equally fascinating geological formations.

Rise to the sound of water lapping against your cruiser and dawdle around for just a little while in the steadfast beauty of the bay until it’s time to get back to Hanoi. Once at Hanoi, join your tour leader for an exploration of the Old Quarter – a maze of small alleys housing colonial buildings, sidewalk cafés, pagodas, art galleries, old style houses and so much more. After you’ve had your fill of the Old Quarter get together for a final dinner with a Bia hoi to wash it all down – a perfect way to cap your adventures in Vietnam.

It’s time now to bid farewell to your group leader and new friends but not without a backpack full of memories. Departure Transfers are included on the day. Check out time in most hotels is 12 pm. Please confirm with your Group Leader or the hotel reception.

How much time does the 14 Days Cycle Vietnam take? The North Vietnam Tour package is an ideal option for those who are interested in exploring the north of Vietnam. Joining our tour, we promise to bring you the most remarkable memories of your life: Read more ➤ 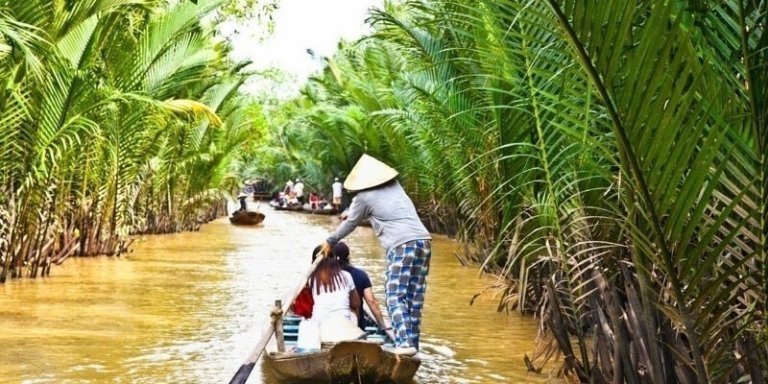 The Saigon & Ho Chi Minh Tour package is an ideal option for those who are interested in exploring the South of Vietnam - Ho Chi Minh city, from tunnels to delta and city central. Spend 4 days 3 Read more ➤ 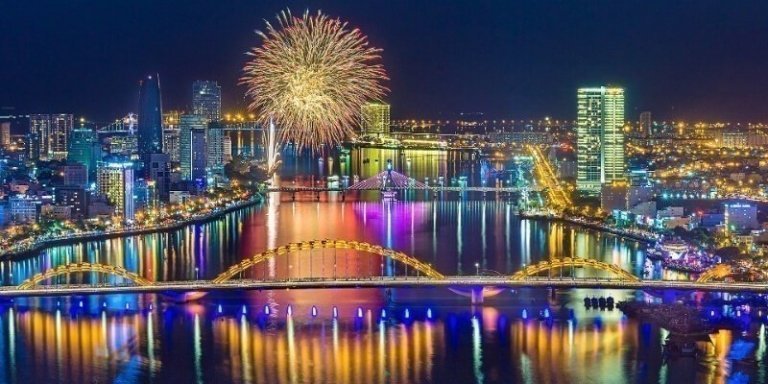 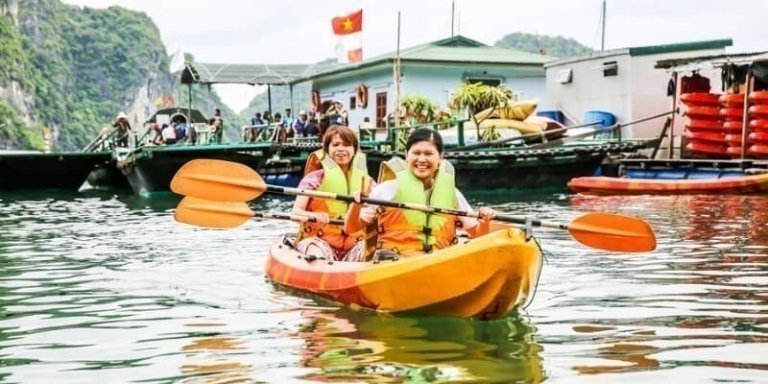 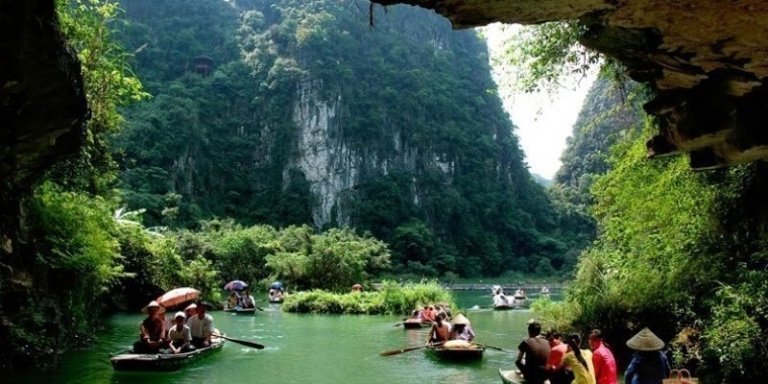 On the Hanoi, Sapa & Ninh Binh - 6 Days Tour Package you are going to discover a lot of legendary and wonderful sites in Vietnam capital, Sapa and Ninh Binh. The package includes local day tours, Read more ➤