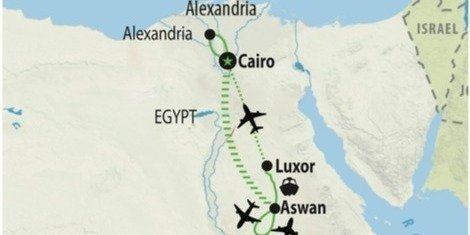 12 DAYS EXPLORE EGYPT The sands of time stand paradoxically still in Egypt its history encapsulated not just in the chronicles but in the structures, monuments, bazaars and a way of life that to this day has changed very little. Chart this paradox on a tour that takes in the sweeping view 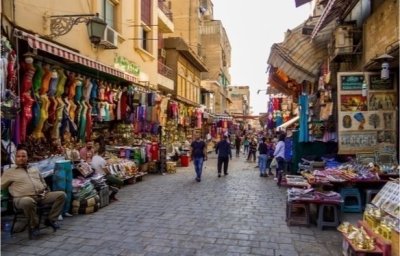 The sands of time stand paradoxically still in Egypt; its history encapsulated not just in the chronicles but in the structures, monuments, bazaars and a way of life that to this day has changed very little. Chart this paradox on a tour that takes in the sweeping view of this country’s most iconic sites, its accomplishments and thriving culture. The iconic pyramids, classical temples and ancient ruins settled within the edges of a modern civilisation to the River Nile sweeping you away in its gentle currents. Nibble at a slice of this country and you’ll want to return for more! 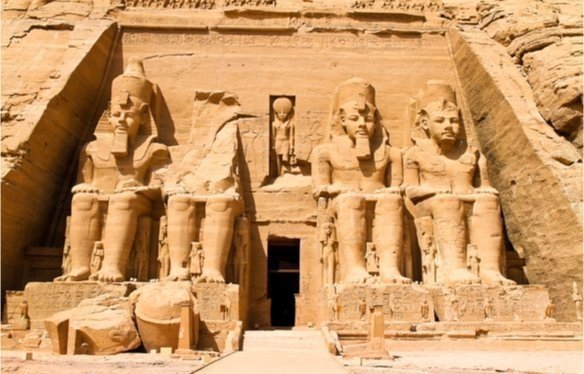 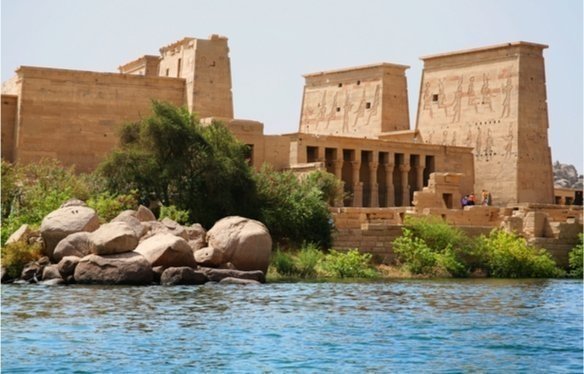 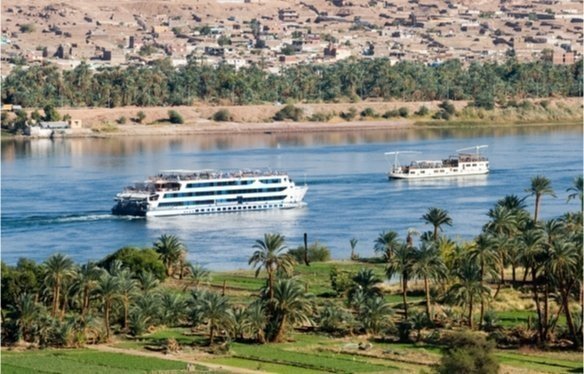 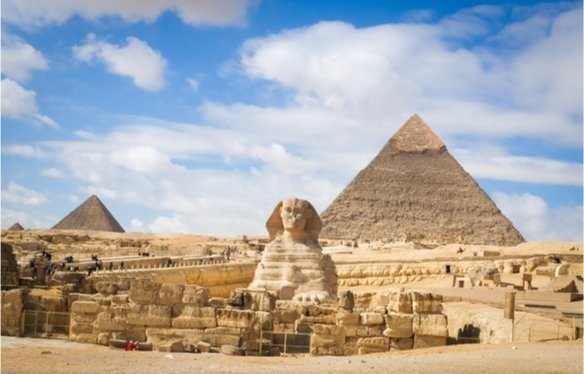 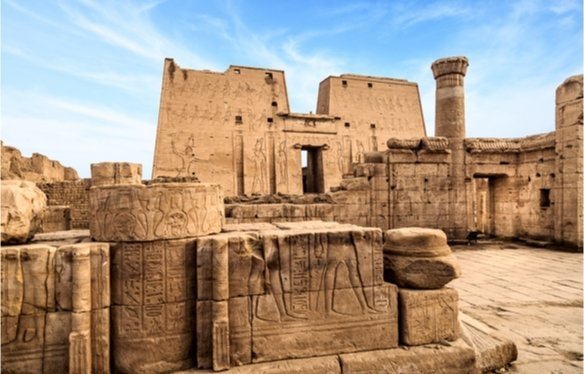 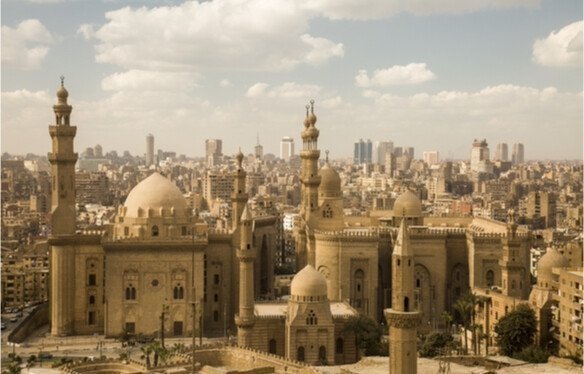 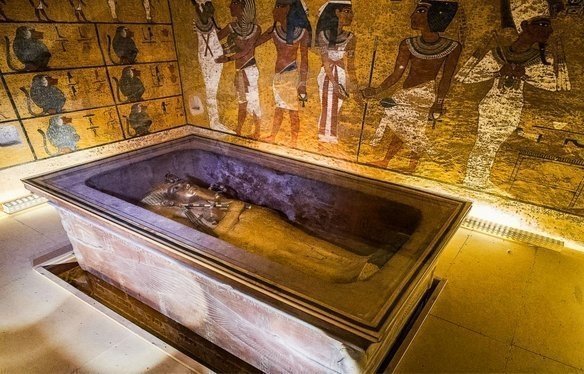 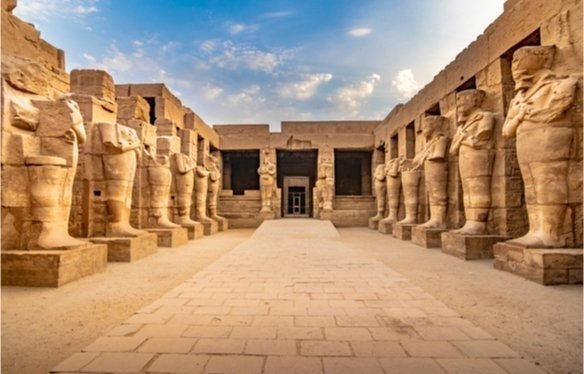 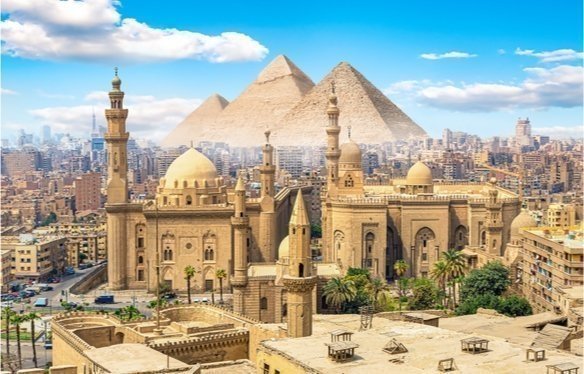 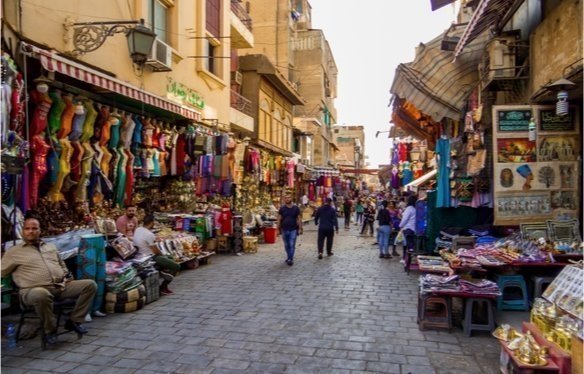 Welcome to Cairo! Take your first breath of the Egyptian air and walk like one if you please as our representative meets you at the airport and sends you on your way to the hotel. Take an exploratory walk around the neighbourhood or hunker down at the hotel, whatever suits you best but don’t miss that 6 pm meeting with your tour leader.

Chase down your breakfast with a 30 minutes drive to Egypt’s grandest and most popular landmark – the Pyramids of Giza – which skirt the boundaries of the city, preserving as it were, a passage and distance between the contemporary and the ancient. Observe the grandeur of these colossal structures from up close and afar to truly understand its technical finesse and then proceed just a stone’s throw away to try and solve the riddle, myth and history of the 4500 year old statue of the Sphinx. Break away from these distant wonders and as the sun climbs its way on the back of afternoon, wander through the slender alleys of Khan al-Khalili Bazaar. Take sight of the shops and the mind boggling antiques, gold, silver, perfumes and textile that spill onto the roads, punctuated by the occasional cacophony of metal workers as they hammer their products into shape. Later in the evening, share a slice of what it is to travel like a local as you board an overnight train to Aswan

Grab your bags and alight at Aswan’s train station and head straight for the Temple of Isis alternatively called Philae Temple. Accessed by boat, the temple lies on the island of Agilka where it was relocated from its original island of Philae and constructed piece by piece in the 60s. Listen to the story of this relocation as you pass through the hieroglyphs, columns, carvings and the minute details that echo the influence of different eras. After visiting this remarkable temple, take a breather at your hotel-eat, nap or read; take your pick but tie your shoelaces again in the afternoon as you prepare to walk through the rainbow hued Nubian village that’ll have you grabbing your cameras in earnest. While the vibrant splash of colours that mark the village is its immediate attraction, spare some time here interacting with its friendly inhabitants, bargaining with a vendor for spices or even casting an eye over the rather unusual sight of domesticated alligators!

Catch a 45 minutes flight out of Aswan today to explore the magnificent Abu Simbel Temples. As much as the backstory of these temples bear a verisimilitude to the Isis Temple both in history and its relocation, the colossal edifice with its four guards looking out across towards the Nile is only a curtain raiser. Negotiate your way through the Inner Temple, the Vestibule and the House of Gods-each adorned with hieroglyphs, mural reliefs and decorative friezes that speak of war campaigns and religious practices. Once you’ve explored every corner of this unique temple, fly back to Aswan; watch the wind catch the sail on board your felucca and float languidly on the iconic River Nile. Round off your day by stepping onto your dahabiya (a shallow bottomed barge-like boat) where lunch awaits, as does a relaxing trip along the Nile for the next two days.

Watch the first hint of light splay itself across your piece of the world and brighten the day in consonance with the waking Nile. If early risings are not your thing, let the gentle rocking of the river absorb you into a lazy morning. Sail along the river for the better part of three hours and then drop anchor at Izbat Al Bayyarah to visit the Kom Ombo Temple, built during the Ptolemaic era. Work your way here, in the temple complex gazing at the exquisite frieze and reliefs detailing amongst others, the principal gods Ombos, Haroeris and Sobek, as well as scenes depicting Haroeris presenting the Ptolemaic-era pharaoh with the sword of victory. Continue sailing down the river after this visit until you dock approximately 5 hours later at Edfu.

After breakfast, disembark and stretch your legs, but only for a moment as a horse driven carriage awaits to deliver you in style at the Temple of Horus where, according to myth, the falcon headed god fought the god of the underworld. Completed during 212 BC, walk through this grand piece of architecture that’s gigantic in both scale and vision until it’s finally time to make your way back to the river-Luxor beckons next. It’s effectively the last night that you’ll be sleeping on the Nile so make the best of the experience tonight! Let the river carry you further down its riverine landscape fringed with date palm trees, past cattle lifting their heads curiously and local inhabitants flashing a smile as you sail past.

It’s time to cast a parting glance at your floating accommodation this morning and strike for land. Head directly for the Karnak Temple, reputedly Luxor’s top attraction – and that’s saying a lot in a place where the wealth of ancient structures and monuments are innumerable. Pass through the temple confines littered with kiosks, pylons, columns and giant statues that extend approximately 2 sq. kilometres but take time at the famous Temple of Amun, the heart of Theban religious life, to impress itself upon you. Decipher the code of Pharaohs as each tried to outdo their predecessors by adding both aesthetic and engineering flair to the complex. Leave the temple complex after you’re done and head for the hotel, but return in the evening to unravel more of its mysteries at the sound and Light Show.

Take an excursion this morning to the legendary Valley of Kings, hidden beneath the folds of Luxor’s west bank escarpments, which themselves act as sentinels to the final resting place of Thebe’s kings. Walk through the corridors decorated with vibrant paintings and murals. Lose yourself in the inscriptions and reliefs which echo the belief systems and burial rites of these ancient kings as you enter the subsidiary chambers and then, finally make your way to the main chamber that houses the sarcophagus. Sixty three tombs rest within the Valley’s womb so you’ll have to take your pick amongst the most famous – the obvious one being the Tomb of Tutankhamen, from where some of the greatest findings were discovered. An alternate but magnificent way to experience the west bank is to take a hot air balloon ride. Enquire with your tour leader to work out the details and see how best to fit it in your schedule.

Complete a full circle this morning by taking a flight out to Cairo. Make a pit stop at the immensely edifying Egyptian Museum with its assemblage of artefacts and try to make sense of it all, now that you’ve covered a fair portion of the Pharaonic world on your tour. Stop, consider and fix the chronological puzzle here as you pore over the attractions before driving approximately 3 hours eastward to the historic city of Alexandria, your stop for the night.

Squeeze your luggage into your vehicle after breakfast and head deeper underground into the catacombs of Kom-el Shuqqafa, a necropolis housing some tombs as well as a banquet chamber built to pay respect to the dead. Found purely by chance (an amusing story which is in complete contrast to the somber perception of the place), explore these chambers and discover the subtle workings of Time’s hand as Pharaonic carvings in the walls, columns and vestibules share space with Roman and Greek ones. Emerge from this mysterious pit and breathe in the light of day as you make your way next to Pompey’s Pillar, a Corinthian column built in 297 AD to commemorate the victory of the Roman Emperor Diocletian over a revolt in Alexandria. Following the visit here, leave the splendours of this city behind and drive back to Cairo.

Construct the pieces of Egypt’s pyramidal puzzle as you travel to Saqqara’s necropolis and witness how it all began by stopping first at the museum of Imoteph, the ancient architect who is credited with having conceived the idea of Egypt’s first stone structure. Pore through the best of Saqqara’s exhibits at the museum, including the oldest complete mummy and then trudge out to survey the most striking landmark – the Step Pyramid, believed to be the prototype of all other pyramids. Let the tombs of the pharaohs swallow you into their recesses of vast chambers and passages and get a glimpse of life as it was in the old kingdom, communicated through the mural reliefs carved on the Mastaba (ancient Egyptian tomb) of Ti. Wander around some of the other popular sites at the necropolis and when you’re done, head back to join your travel companions for an optional final dinner to close your tour out on a high!

It’s time now to bid farewell to your group leader and new friends but not without a backpack full of memories. Departure Transfers are included on the day. If you’re looking to extend your holiday why not check out our 8 Day discover Jordan trip.

How much time does the 12 DAYS EXPLORE EGYPT take? 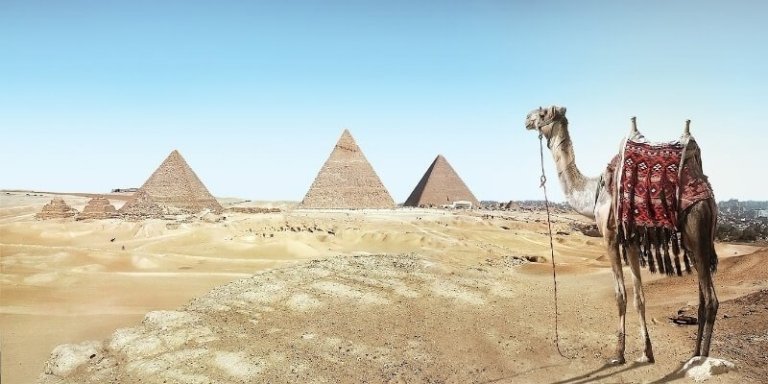 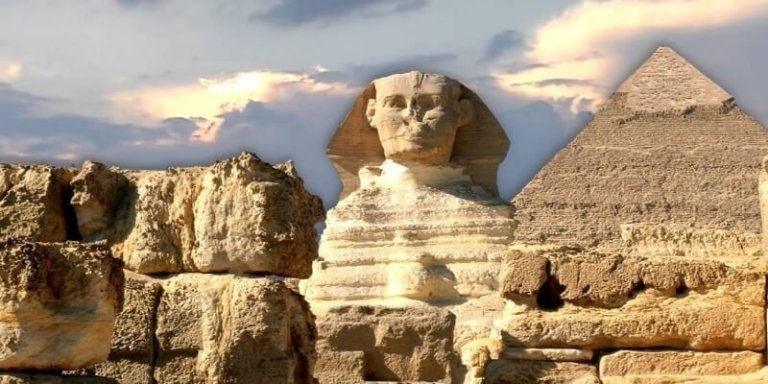 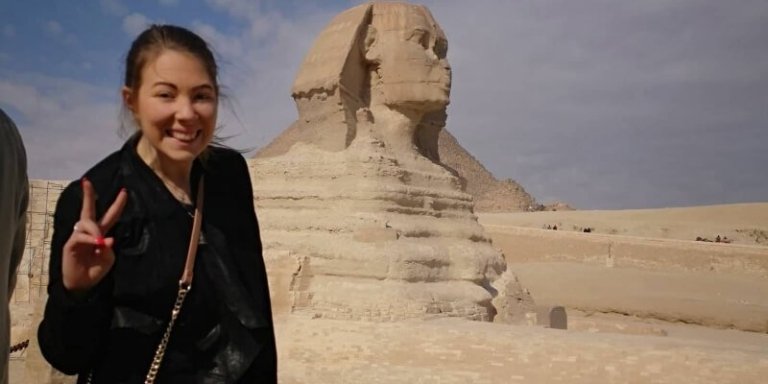 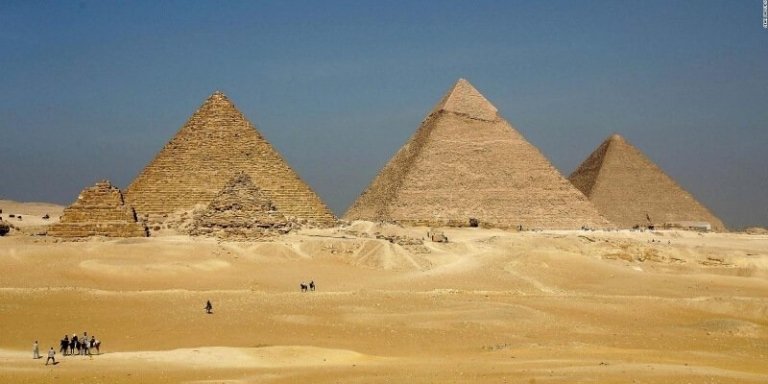 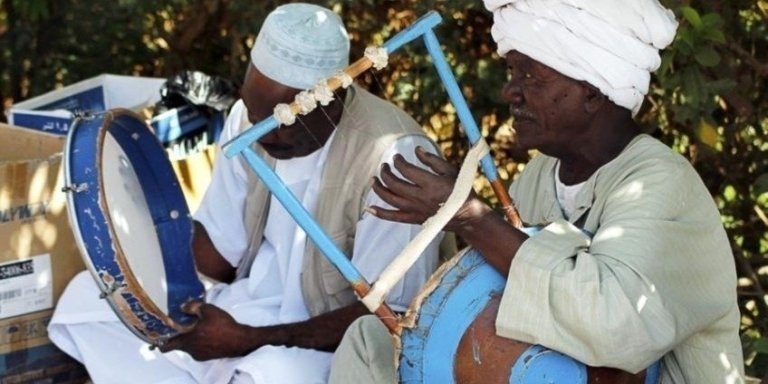 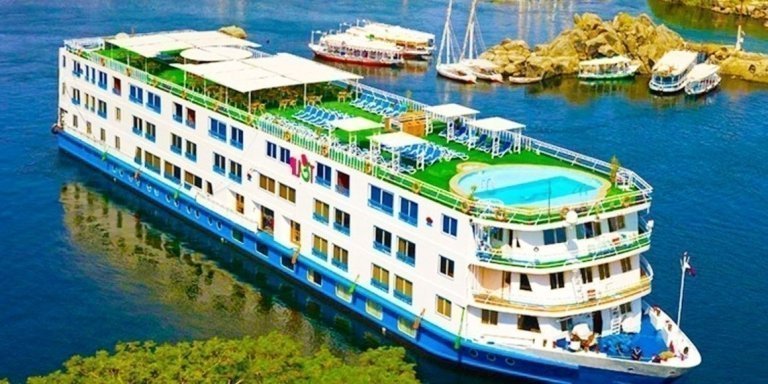 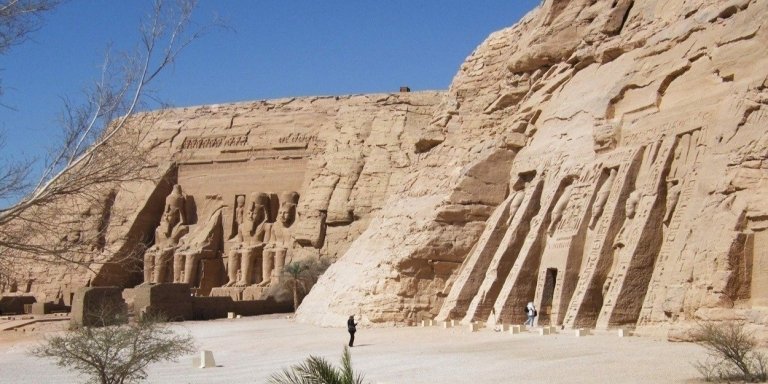 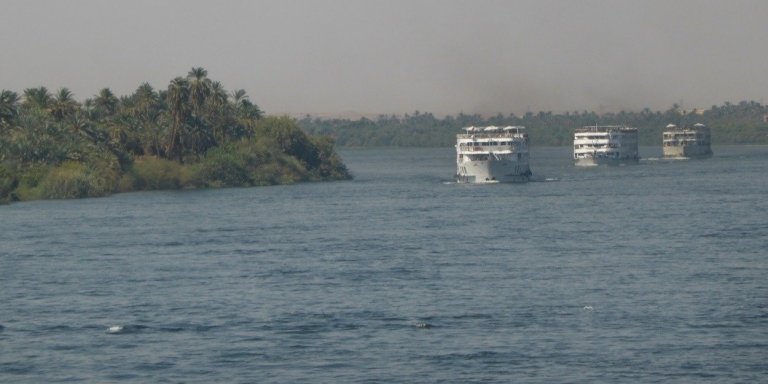