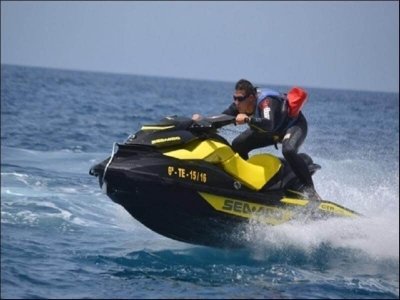 Jet Ski Tenerife Explorer Tour was tasted by TripsPoint travel experts beside with other jet ski tours in Tenerife and was awarded as the best one for a few reasons. First of all the jet ski tour duration is simply perfect! 1 hour is not enough, 3 hours is too probably long for ladies, but 2 hours is the perfect compromise, so you really enjoy jet ski ride without getting too tired. Well, driving fast and modern jet ski bike for 2 hours you will feel you are tired after the jet ski tour, but that's that good feeling, relaxing, feeling tired and feeling the day was absolutely amazing!

And here we come to the second reason why Jet Ski Tenerife Explorer Tour is probably the best on the island - diversity! Not like other jet ski tours in Tenerife this one starts in quite unusual location, the small marine in Las Galletas, outside of the most commercial zones. You drive your jet ski along the Natural Reserve Malpais de La Rasca - a kind of unique place in Tenerife. It because the waves here are alway going along the coast - not to the shore. That means along your jet ski tour you have possibility to really have a joy not having side wave and you, accelerating jet ski, can jump and fly. That a real fun with jet ski!

Even, if you are not a fun of adrenaline, you can go slower and much more stable - riding the waves with your jet ski. In addition what you see with the Jet Ski Tenerife Explorer Tour is pure Nature and not resorts.

Your Jet Ski Tenerife Explorer Tour starts with instructions made in a easy manner, showing you how to operate your jet ski bake. Then you going from the marine into the open ocean following speed boat with 2 monitors - they are instructors taking care about your safety along the jet ski tour.

You are basically going in a group of 3-6 jet ski bikes leading by the speed boat. Jet ski bikes are forming V-shape, what's clever, so everyone is safe and less experienced jet ski drivers wouldn't hit you by accident. Here's the third reason - you can really have a fun with the Jet Ski Tenerife Explorer Tour. It because the rule is simple, if you like to drive fast, jumping over the waves and speeding making turns (what an adrenaline and joy!!!) - go the last! If you go the last you are not creating any dangerous situations for those less experienced driving in front of you. You can go back, turn and speed forward having real fun with your jet ski in Tenerife!

The other reason why Jet Ski Tenerife Explorer Tour is maybe the best jet ski tour is the diversity! You are not just riding jet ski bike - you are visiting with your jet ski a very interested places. If you are lucky you can even see dolphins following your jet ski and jumping just some ten meters from your jet ski, seams they are having fun following your jet ski. Then you are riding around the floating fish farm and there are not just dolphins looking for easy food but also sea turtles. Finally you are coming to amazing Palm Mar wall where you can drive your jet ski into the cave in the giant cliff which's filled with water to the half. 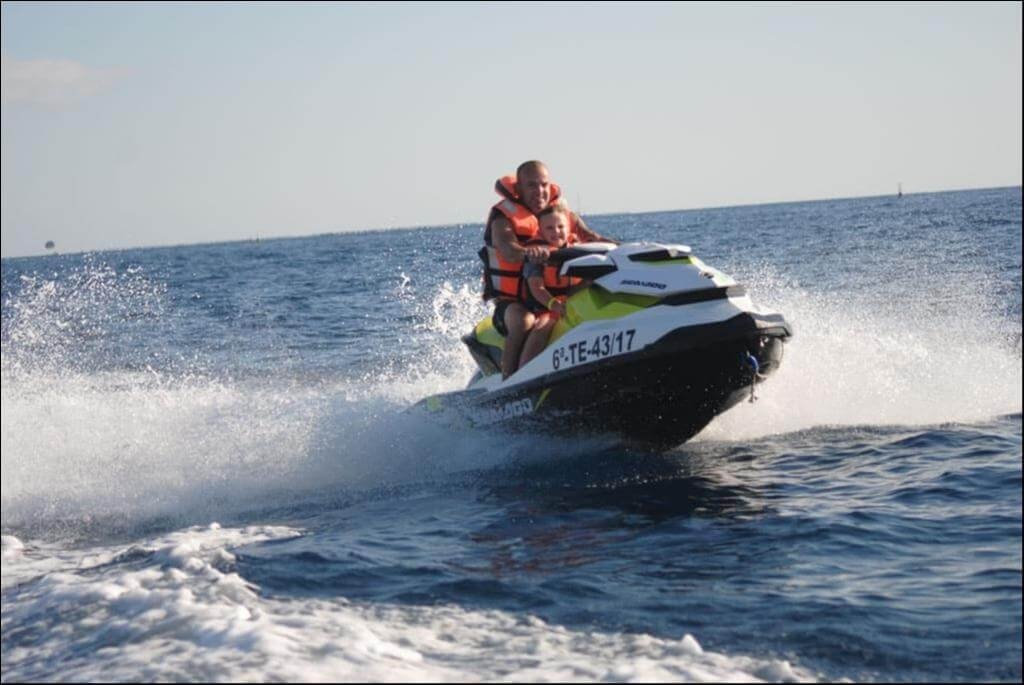 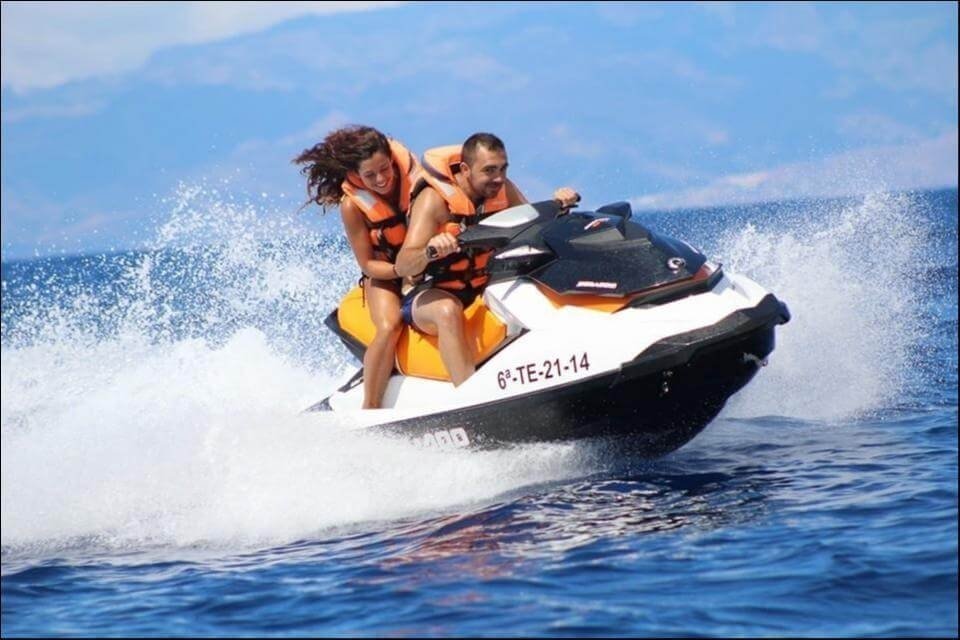 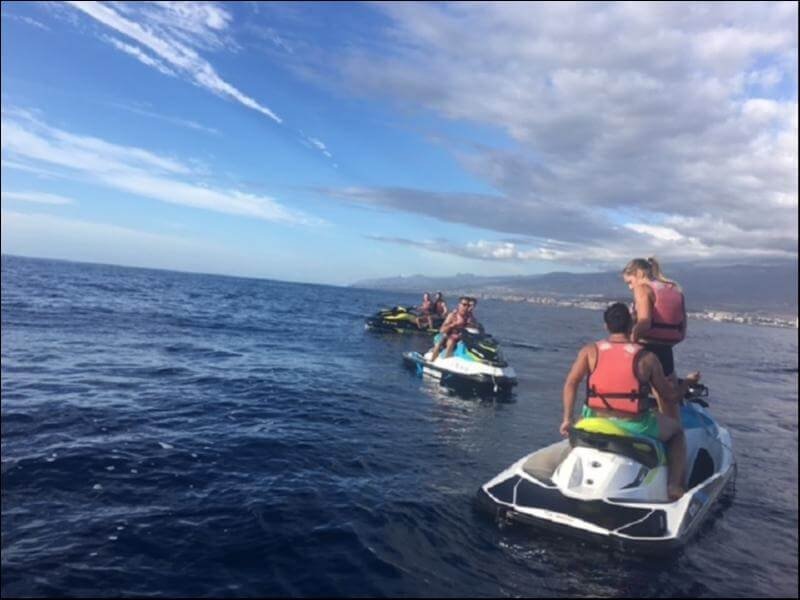 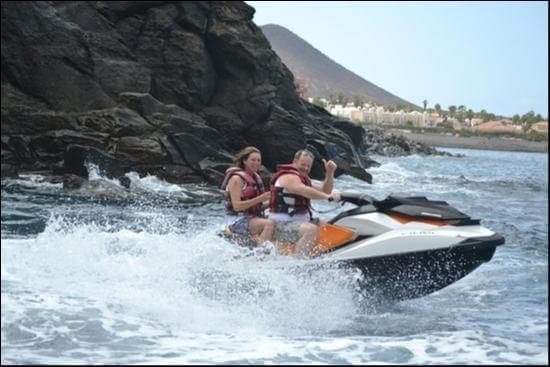 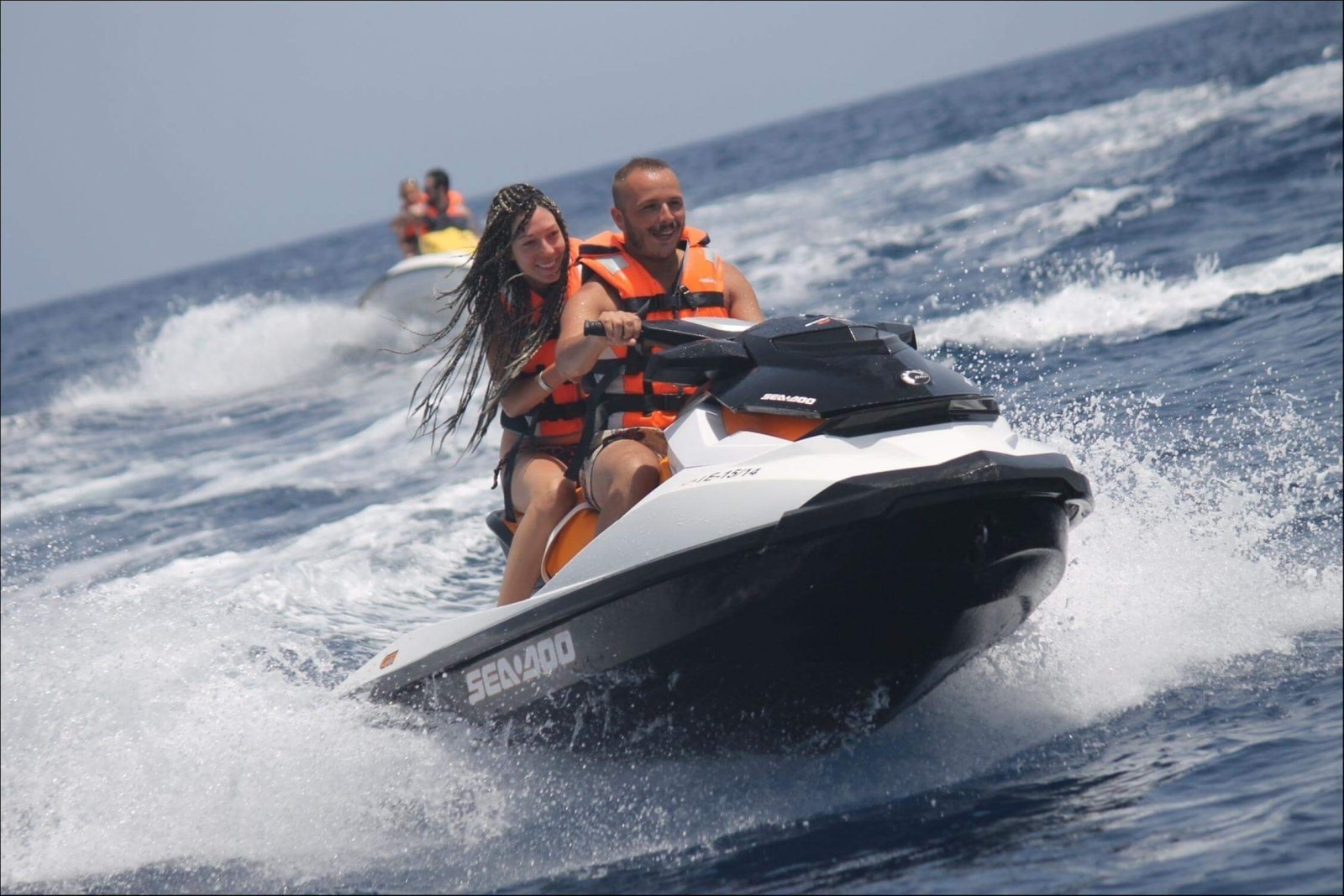 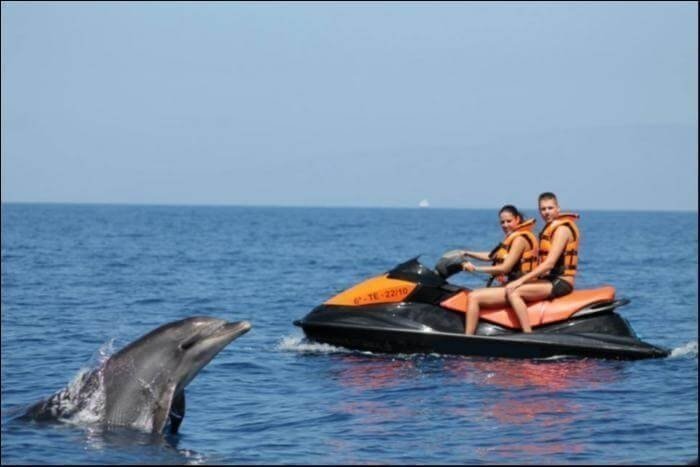 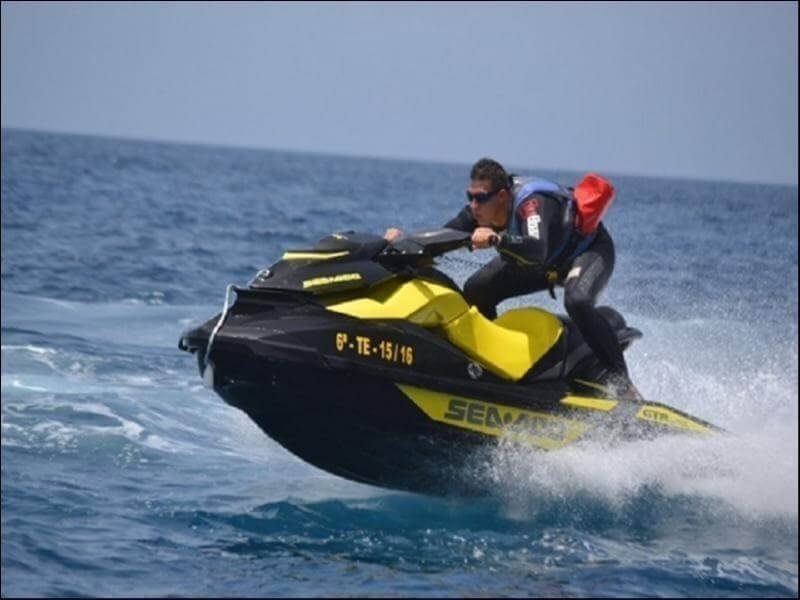 The Jet Ski Tenerife Explorer Tour starts different times, depend on the season.

Exact pick-up hour from your hotel within pick-up area will be appointed after the booking is made.

If your Hotel is located outside of the pick-up area defined with circle on the map below, please, choose any big hotel within the circle area, specify it while booking the jet ski tour and come there on time by yourself!

How much time does the Jet Ski Tenerife Explorer Tour - 2 Hours take?

For all the speed lovers!

Such a great activity! I was impressed with the organization and the way safety was shown as a priority. +1 to the monitor who immediately jumped in the cold water to rescue a couple who've flipped their jet ski. If you love speed, you'll really enjoy this activity.

What a great experience with the jets, so much adrenaline and joy. The trip was very well organized. Well done and thank you so much.

Kayak Tenerife Tour in mini-group is for those who prefer the active way to discover Tenerife island. The kayak tour in a small group starts daily in Palm Mar on the South of Tenerife and you have Read more ➤

Get fun and discover the beauty of Tenerife South from the air in the ocean taking Parasailing - Parascending Flight in Tenerife. Parascending flight - real fun for every member of your family and Read more ➤

The Kayaking with Dolphins Tenerife is a fantastic kayak and snorkelling tour. You are going to do two different amazing activities at once. Firstly watch Dolphins right from your kayak and then Read more ➤

Banana fun boat ride in Tenerife South beaches is one of the cheapest beach activities available in Tenerife. For many years this has always been our number one activity in our beaches in Tenerife. Read more ➤

Crazy UFO fun boat ride from Tenerife South beaches - the beach water activity for those who love adrenaline! And even more - cheap adrenaline, because the ride is unbelievably cheap and everyone can Read more ➤

Jet Ski Tenerife Discoverer Trip is a good option to try jet ski in the ocean for the first time. No jet ski experience required. You ride in a group along the beautiful nature reserve on the shore! Read more ➤

FlyBoard Tenerife Experience let you fly as an Ironman, dive and fly again over the water! Prepare for the best experience of your life booking FlyBoard in Tenerife. FlyBoard is powered by a jet ski Read more ➤