Kayaking in Tenerife is one of the amazing activities you can do on this Spanish island which is located off West African coast. Tenerife is the largest among the Canary Islands. It has many beaches with sandy soils from yellow to black and you can come by kayak to any of them. Tenerife has a relatively stable climate of between temperature of 15 degrees to 25 degrees Celsius. Analysis of two decades of oceanographic satellite measurements of all open water done showed that the water temperatures of Tenerife’s sea varied around the year.

Kayaking in Tenerife is an activity for almost everyone

Offshore winds are experienced in Tenerife, that cause colder deeper waters to replace the surface water that has been warmed by the sun. One should consider air temperature wind-chill and sunshine. Kayaking in Tenerife is one of the best ways to discover the impressive mountains called Anaga in Tenerife. You can paddle kayak near the mountains of Anaga and discover the coastline from Tenerife with its beautiful beaches and impressive cliffs at the foot of Anaga by the sea in a sporty way on a kayak. During a kayak trip, there are things you can't miss on swimming gear and sunscreen, hat a tower. Kayak tour at the amazing Tenerife with dolphins watching and snorkelling with turtles. A 2-3 hour exploring which includes a stop in the bay of the turtles and one will get to know the sea and it's fascinating up close. 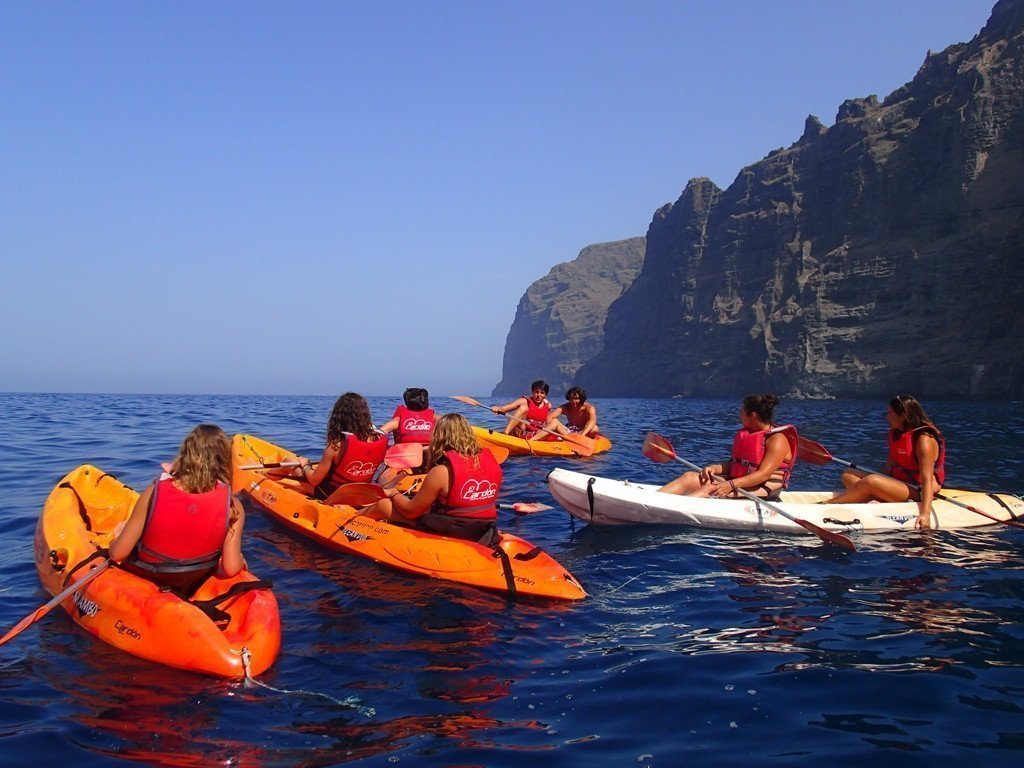 Kayaking basically is the use of kayaks to move across waters. Its bit different from canoeing, this is by the sitting of the paddler and the use of blade on the paddle. Kayaks have closed decks although nowadays sit on top and inflatable kayaks are getting popular. Kayaks were initially made of wood and skin for hunting and fishing, where it could allow the hunter sneak behind an animal on the shoreline and easily catch their prey. Nowadays kayaks made up plastics, metals, feather-light carbons and many more materials. Each design has specific advantage for manoeuvring, stability and performance. Activities involved with kayaking include; diving which is a recreational activity where the diver paddle to the site in a kayak and they carry their gear to the place they want to dive. They are also used for fishing especially for smaller and mid-size fish. Its ability to operate well in shallow waters and getting to solitary environment where boats can’t manage gives it its uniqueness. Kayaks are considered environmental friendly and healthy for means of transport leave alone the cost compared to motorized boats. Kayaks are nowadays popular in the area of ecotourism. And in the cases of warm waters like in Tenerife seas they are common. Kayakers watch dolphins breach and turtles in shallow bays water on the local ecosystem. Kayaking in Tenerife is one of the best experiences among water sports in Tenerife worth to book preparing your list of things to do in Tenerife on a holiday here.

Requirements and expectations during a kayaking in Tenerife 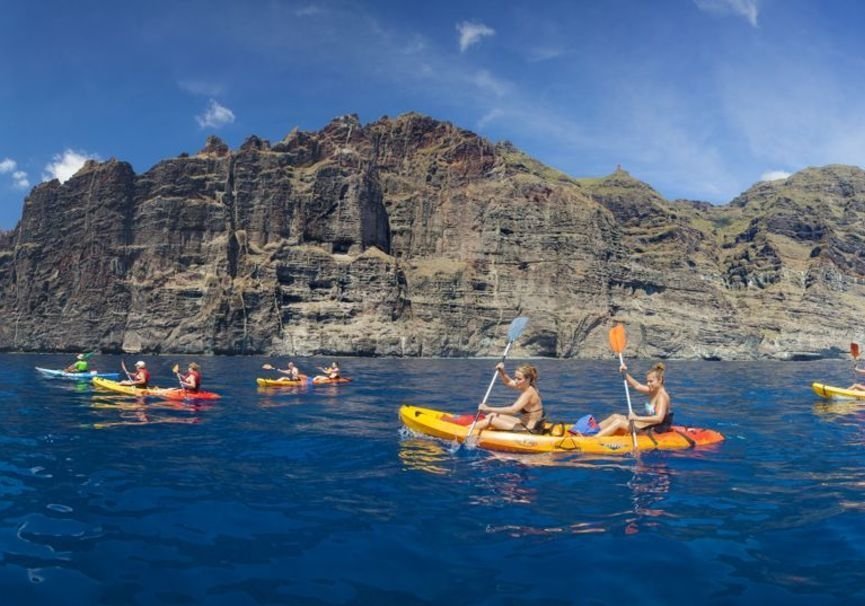 The kayak tours in Tenerife always providing a guide which is taking special care of beginners for their safety. You will often observe dolphins and sometimes turtles. The kayak excursions in Tenerife usually begins at the beach of Los Cristianos where one gets an introduction and is lead to southwest coast in the direction of Palm Mar. Marine mammals will show up right in front of you and the experience is so amazing to see the animals so close. You will also enjoy the beautiful view of the wide blue sea and the island during this exploring. You can’t miss taking great photos that will be taken by the kayak tour guide who also provide life jackets the kayak, an introduction on kayaking, neoprene shoes, photos, and snorkelling equipment. No previous knowledge is required to kayak tour in Tenerife. About the dolphins, Tenerife is known for its various species including the bottlenose dolphins that are always available throughout the year due to the warm nature of the waters. You are not supposed to disturb the sea animals, but enjoy by observing the fascinating sea creatures without frightening them. The dolphins gather around and jump into the air in front of you or even dive under the kayak. It’s such a great experience available while you kayaking in the waters around Tenerife island. 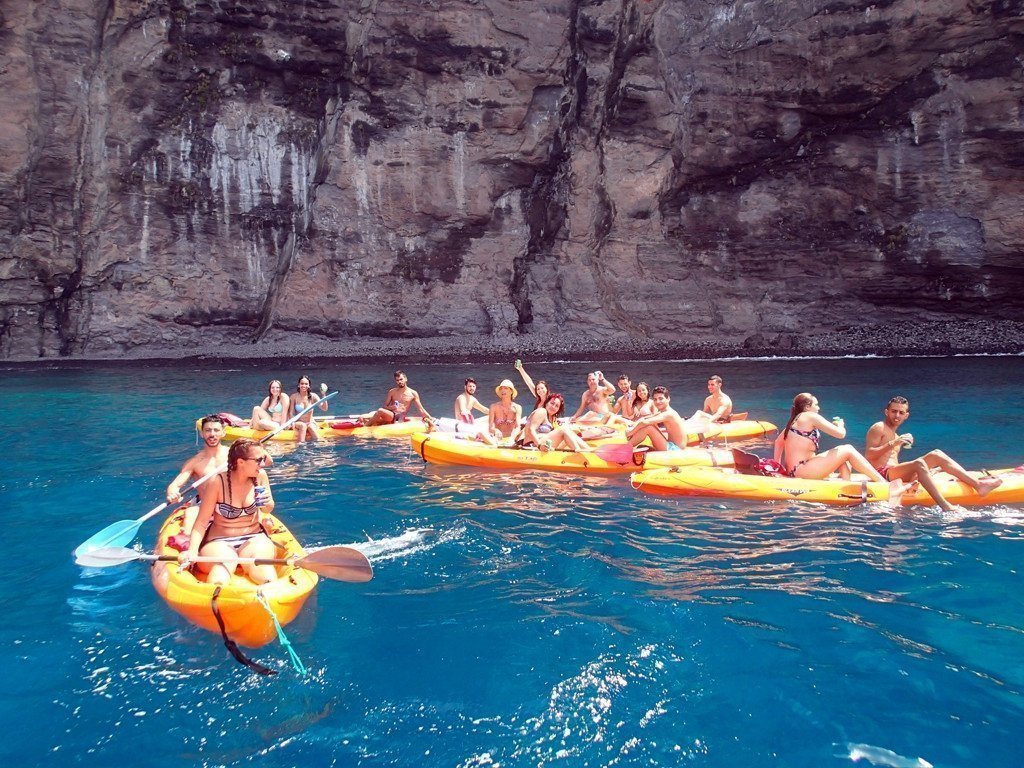 Kayaking in Tenerife gives one a unique feeling of nature, emotions and one is really puzzled and entertained by the marine reserves which are located just 10 minutes of Las Americas. The tours are guided so no need to worry. Kayaking is accessible to anyone both children and adults to have fun. There reasons to choose a kayak to a dolphin in Tenerife, they are; using the kayak will get you to the dolphins and observe them up very close. You are experiencing the natural way to explore in a marine reserve. There is no such a noisy music in a kayak like on the mass tours with catamarans and the only noise is from the sound of the sea. Kayak trips are made in small groups, unlike boats that is usually overcrowded. There are following kayaking destinations in Tenerife: 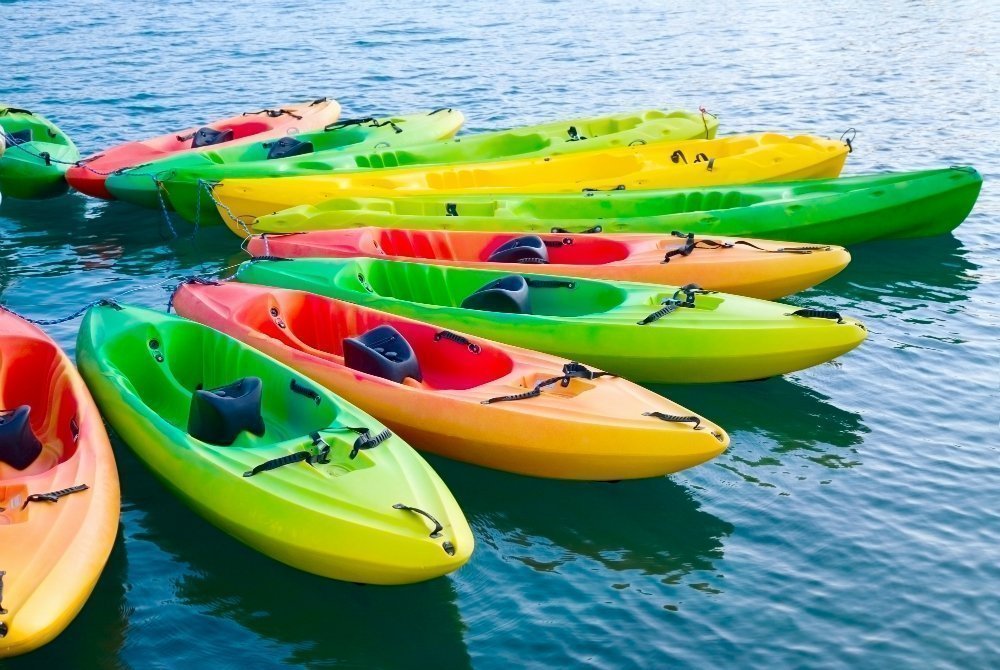 You will paddle or be paddled along the coastline and discover the beautiful scenery of the sea at a closer look. Tour guides are available for hire and also hiring the kayak is affordable. 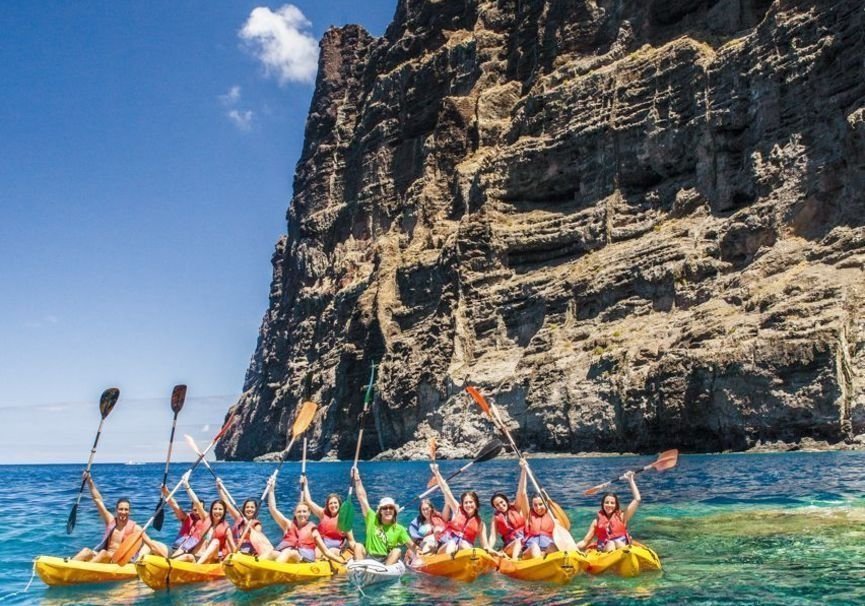 This is a guided activity which takes approximately about 2 hours, here even pets are allowed. If you love nature Tenerife is a destination for you to kayak the coast of Teno massif where there are cliffs of Los Gigantes that hosts great interest such as Taga hawk, Guincho and also crows which are the goal of bird watchers of Tenerife. You can choose between two seats double or single kayak with one seat - it depends on how you won't have fun onboard. Safety is key even, if the waters are pretty calm and speedboat follows the group for a case if any help required. Never hesitate anymore to experience the sensations of touring the waters of Tenerife by kayak to admire the views of the beautiful landscapes. Don't forget water and sun glasses and apply suntan cream, if your skin is not used to strong sub-tropical sun. 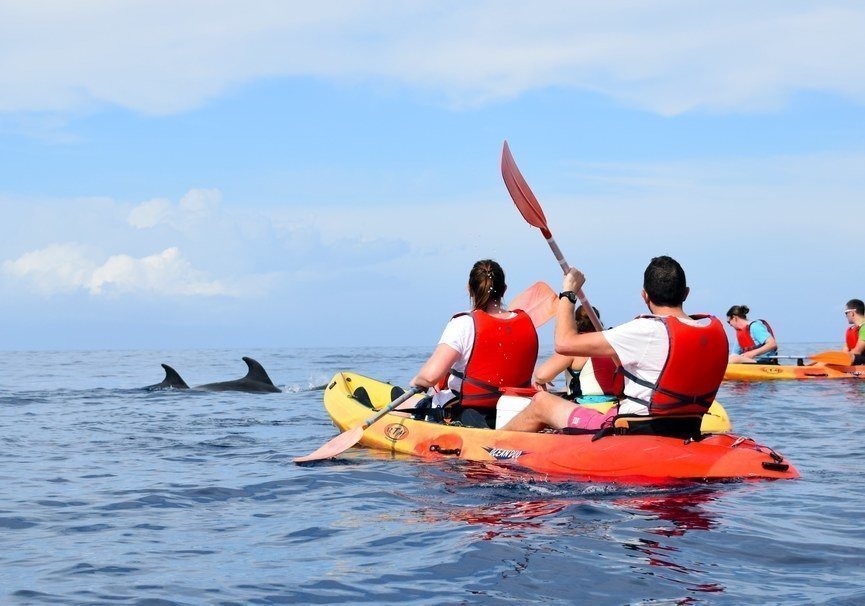 There are small local companies that offer one hour kayak tour. It doesn't requires any special level of physical fitness. It starts from Palm Mar shore along the rocks, fish farms in the ocean and cave. Experiencing watching dolphins is real and so fascinating. There is also a two-hour kayak trip which is classified as an amateur tour which does not need one to have any special training. The paddling route leads you generally from Palm Mar along the Palm Mar Wall to Los Cristianos and back. There is an also sunset kayak tour which is meant for romantic tours and this is only offered for couples in the rays of the setting sun. A kayaking tour with neon lights the rocks of the sleeping volcano mount Guaza. A professional photo shoot is available and champagne as a gift. During kayaking tour you are provided with snorkelling masks which make your breathing and diving more comfortable. When you combine the kayak safari, with the discovery of the beautiful wonderful underwater world at the Atlantic Ocean by Palm Mar Wall. This place is one of the richest in sea life around the island. You will experience to see various fish species', green turtles, stingrays, dolphins and sometimes even pilot whales. Professional photos are taken to remind you vividly the emotion of the vacation on the kayaking adventure around sunny Tenerife. Those captured moments are just so unforgettable. Participants also provided with life jackets, wet suits according to the weather, snorkelling equipment, fresh water, sun protection accessories and a safe place to store your effect. 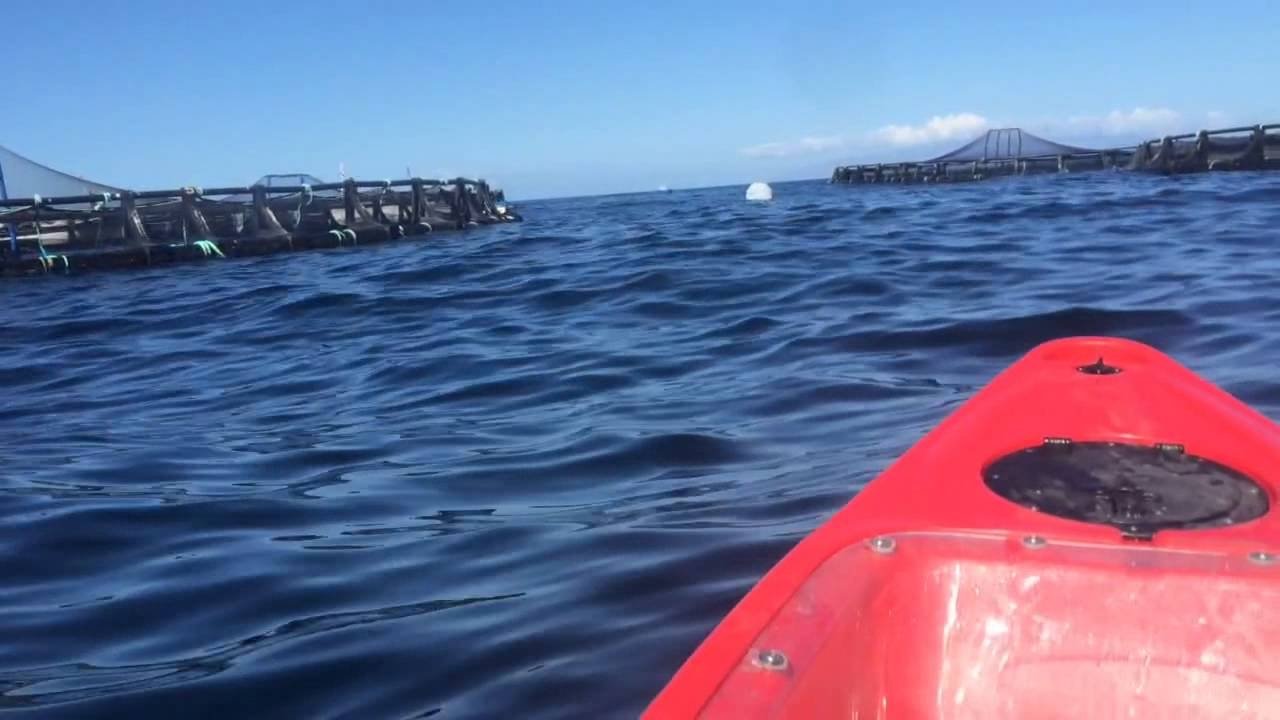 Perception kayaks in Tenerife are most popular on among kayakers on the island. These British made kayaks are providing predictable behaviour on the water and excellent course stability. Their kayaks are easy to handle, stable and easily manoeuvrable. To have your kayaking experience in Tenerife guaranteed it's required to book in advance and for the first days of your stay in Tenerife. So, if the weather will push provider to cancel the kayak tour that day, you will be offered another of the next days, so make sure you will still stay in Tenerife. If you are not for kayak tours then you can consider boat trips in Tenerife. With a boat trip excursion you can't miss is the adventure of emotions surrounded by whales and dolphins in their natural habitat. The best boat trips are starting from Puerto Colon for three to six hours trips. You choose your shaded seating area or the sun bed at the front. After leaving the harbour the captain introduces himself and tells you a bit about the trip and will serve you some snacks and drinks thus it’s time to sit back and relax for the exciting moments. Soak up the sun as you sailed out to sea for a close look of Tenerife’s whales and dolphins swimming in their natural habitat. You then cruise along Tenerife stunning coastal to the small sandy bay El Puertito where you can be dropped to snorkel or swim if interested or want to explore the waters more.

There's no risk taking part in organized kayak trips kayaking in Tenerife. But, if you are going alone, remember, risks are dashingly small although fatal incidents occurs. You must be very careful going alone, because it is open ocean - if you drift away from the island, you may be simply lost in the ocean. Weather change is also another risk that should always be put into consideration. The water currents can change and sudden thunderstorms can come or other unpredicted incidents may happen. But even though there are all reasons to try kayaking by Tenerife, at least taking a short 2 hours kayak tour. Its great workout experiences a stress reliever and good for adventure. Many tourists are making kayak trips to Tenerife to see the dolphins in the wild like on the Kayak Dolphin & Snorkelling tour in Tenerife. Another more simple kayaking tour is the Kayak Tour Tenerife which's absolutely perfect for beginners.

In Tenerife besides of surfing and diving kayaking is hobby of many residents and here are many locals practicing kayaking at different parts of the island on regular basis. Some kayakers prefer to enjoy their ocean trips solo, some are uniting in small kayak clubs, so they plan and do some trips and routes together in a company of friends and families. It mainly because Tenerife naturally is a beautiful place for kayaking and you simply must try it coming once to the island.

Snorkeling Tenerife Tour with a chance to meet sea turtles or dolphins and get to know these amazing animals in their natural habitat. Snorkelling in the Read more ➤

Get fun and discover the beauty of Tenerife South from the air in the ocean taking Parasailing - Parascending Flight in Tenerife. Parascending flight - real Read more ➤

Banana fun boat ride in Tenerife South beaches is one of the cheapest beach activities available in Tenerife. For many years this has always been our number Read more ➤

Crazy UFO fun boat ride from Tenerife South beaches - the beach water activity for those who love adrenaline! And even more - cheap adrenaline, because the Read more ➤

Jet Ski Tenerife Discoverer Trip is a good option to try jet ski in the ocean for the first time. No jet ski experience required. You ride in a group along the Read more ➤