Jet Ski in Tenerife is one of the best things to do and the island is one of the best places to enjoy Jet Ski tours in the world. You really need to experience this if you love watercraft. As Tenerife is an island in the ocean there are many beaches around it. It is the largest out of seven canary islands making it the central attraction of tourism from all over the world. The island as quite a number of years been a centre of attraction for local and international tourists for jet skiing. Tours, safaris and circuits by Jet Ski in Tenerife are offered by professionals. This takes away the panic of being on the open water alone. More so you will find other tourists in the water making it fun. The Jet Ski operators in Tenerife have a high-class jet bikes and organize tours at recommendable prices. There are quite a number of things to do in Tenerife that makes it an ideal place for jet skiing. At the same rime, please, remember, there's impossible to just rent Jet Ski in Tenerife. It because here's open ocean around and this regulation is for your safety, so you wouldn't be lost in the ocean.

Why Jet Ski in Tenerife is so recommended activity? 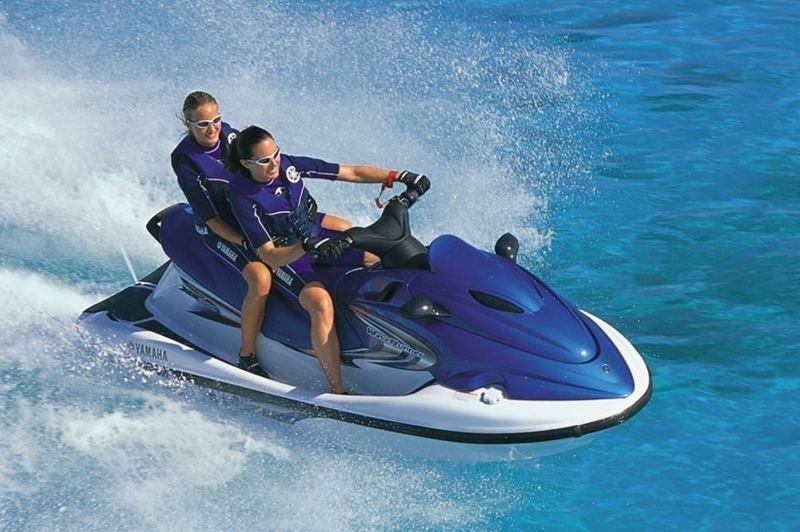 Out of its warm weather and beautiful beaches, Tenerife is the most ideal place to tour for your holiday. Jet Ski in Tenerife is one of the services offered in this place you expect to have an amazing experience as local operators have been doing it for years now. This water sport is mostly favoured by young and active people. Taking Jet Ski in Tenerife is absolutely safe - you are always in a company of at least 2 instructors, fast boat and other Jet Ski tour participants. 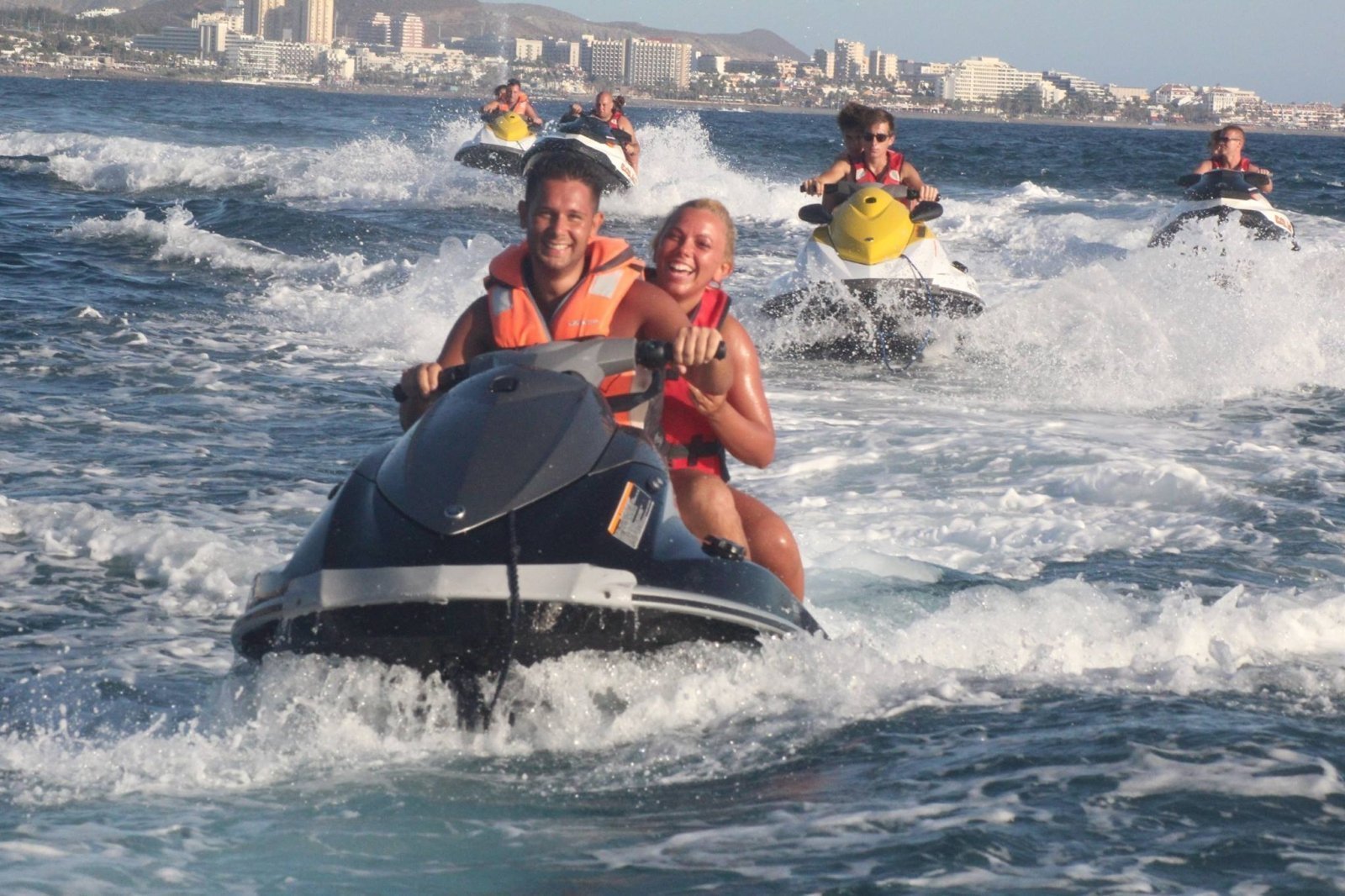 The abundance of beaches makes Tenerife ideal place for Jet Skiing. As Tenerife is an island as earlier said, there quite a number of beaches in this island comparing to other islands in Spain. The settings of this Tenerife Island make it memorable as each beach you pay a visit to offer a different experience from the earlier one. Los Cristianos and Adeje located south of Tenerife resort it is well known for its abundance beaches. Some of the beaches in this resort include; Playa Del Bobo, Playa Del Duque, Playa de Troya, and Playa de las Americas. From the beach you can do shorter Jet Ski circuits and these 20 minutes long circuits are cheapest option for Jet Ski in Tenerife. There are also other resorts in Tenerife. Los Gigantes is one of the places located on the west of Tenerife with a perfect setting for jet skiing also. 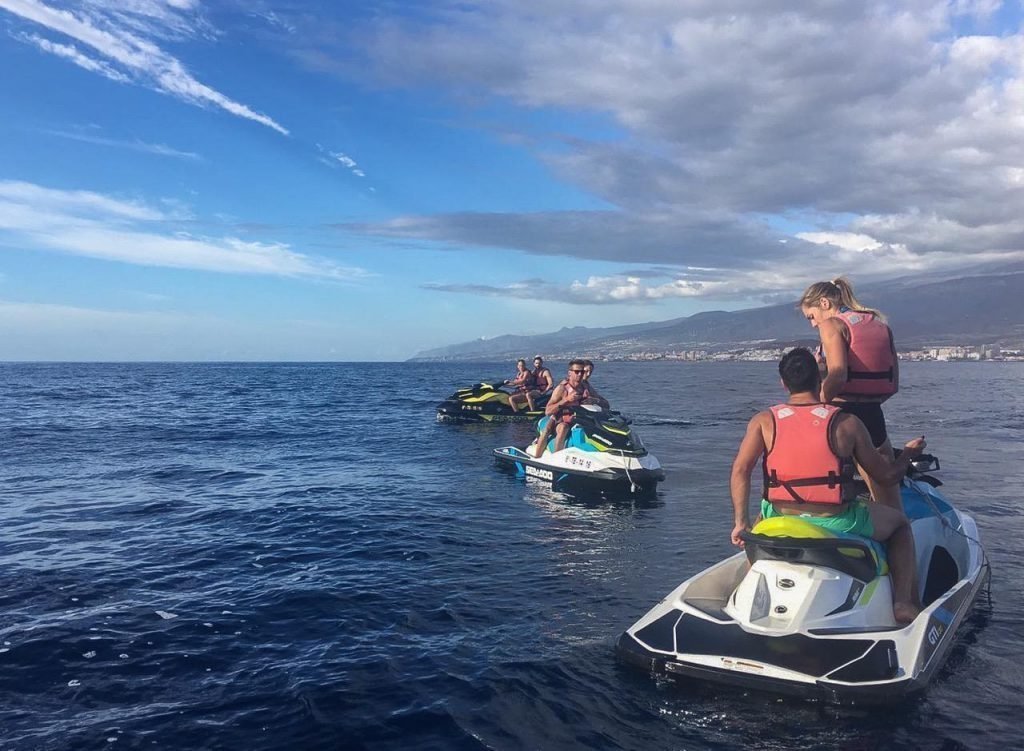 In Tenerife, there is quite a number of places where from you can start your jet ski tour. When looking for a Jet Ski in Tenerife is important to go with solid local operators. Those offering the best, new and powerful jet ski bikes. You want to make an earlier online booking for your future holiday, because Jet Ski in Tenerife is very popular activity, so you make sure you have reserved your jet ski tour or safari in advance. At the last moment you may find only options available that nobody want to take, even it cheaper and this is because some operators have bad reputation - rude instructors, shorter than declared times and very old jet bikes. Make sure you've booked a good jet ski trip - it's safe with TripsPoint - all listed local jet ski tours are supervised and trustworthy. 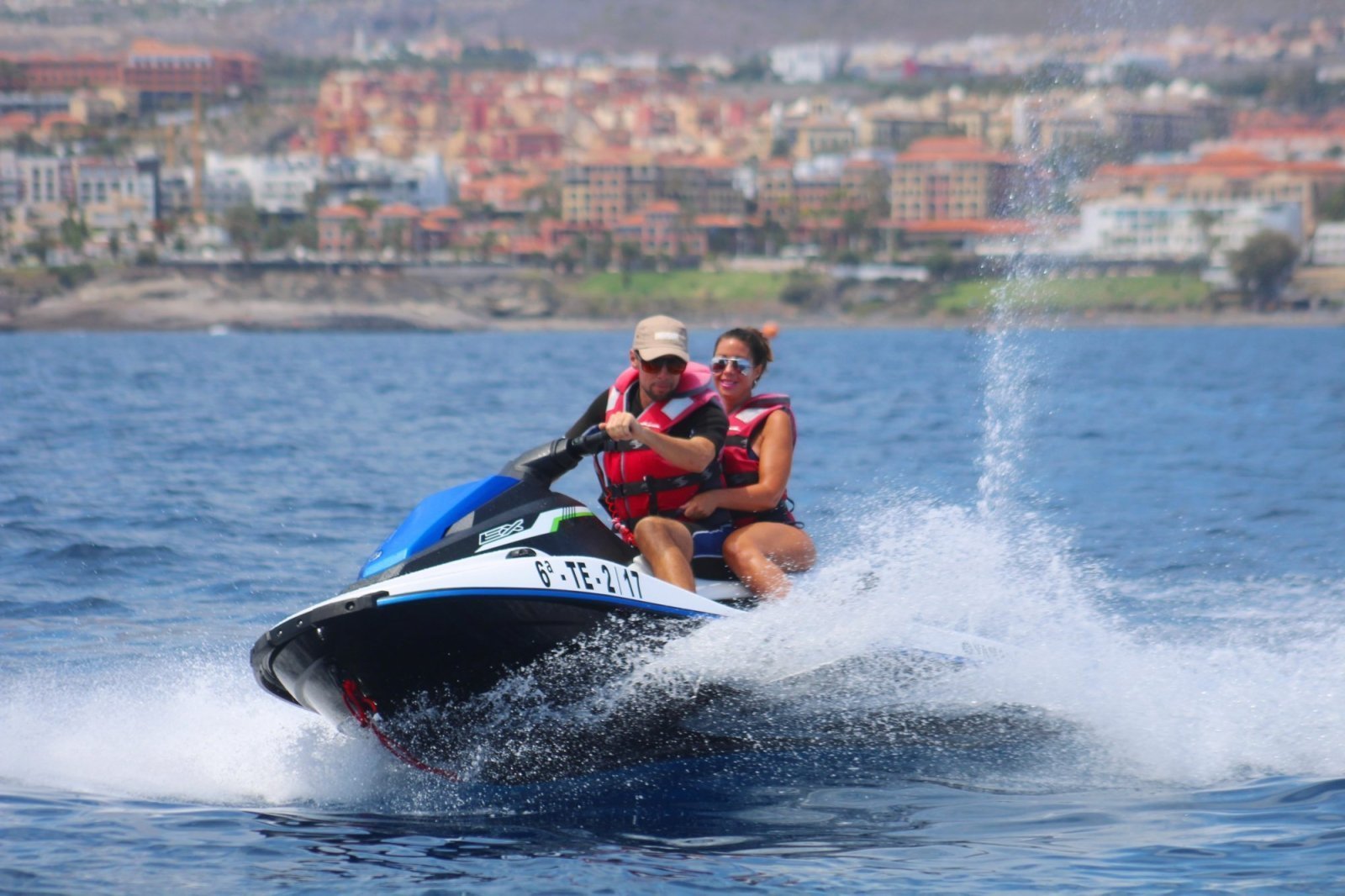 The prices for Jet Ski in Tenerife are quite different and depend how long the tour is. It may depend also on the high and low seasons. The price tagged to the time is very economical as also valuing the high quality of jets in place. For an hour it cost a range of 90-120 Eur. You will get value for your money that one hour you hire a jet as the experience in the beaches of Tenerife is memorable with a jet.

You need to be over five years old to be allowed to get on a jet bike with an adult to do Jet Ski in Tenerife. All other requirements are offered at the jet ski tour descriptions and you always must wear life jacket. You will have to carry your beach clothes otherwise you can buy them at the beach nearby. 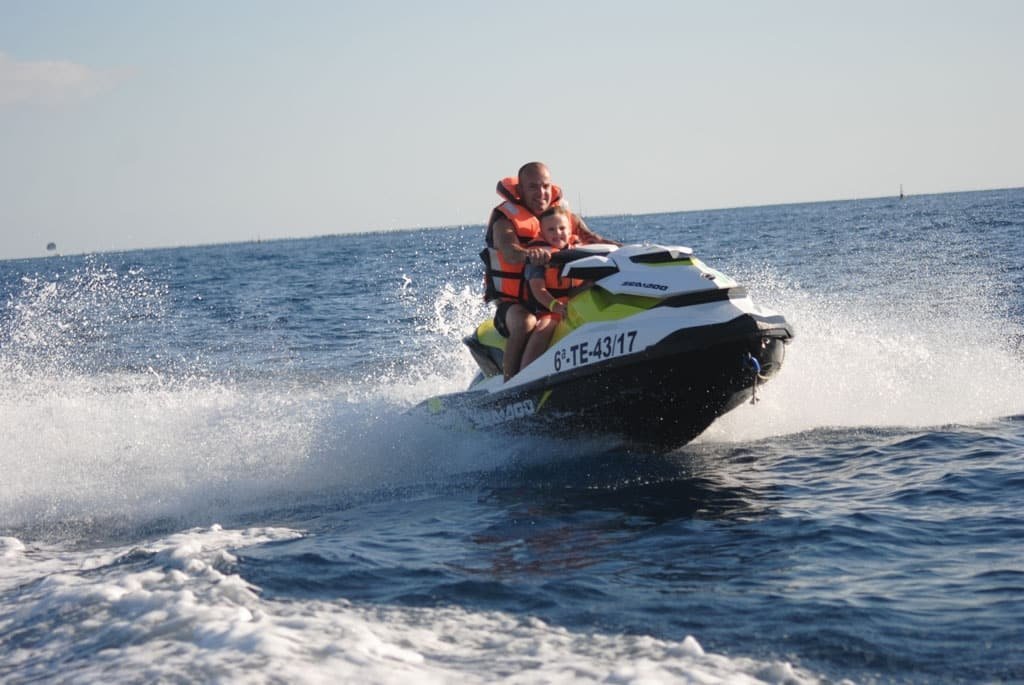 Going on Jet Ski in Tenerife, you never go alone to the ocean with your jet bike. It because you maybe understand that not all of us know how to drive a jet and by so they have their team of experts who accompany tourist to the best either driving for them or assisting them. These professional instructors even teach one how to drive the jet in minutes as it is easier later to keep in line with a group. In case of technical error with your jet, the instructor is there with you and will give all the required attention and assist you. All the jet bikes are well checked before starting a tour.

There are jet ski safaris available only in Tenerife South and no Jet Ski in Tenerife possible on the North of the island. Jet ski safari makes your experience more memorable. When you take jet ski safaris, you will explore many areas located at different places by the shore of Tenerife. Some jet safaris takes you to caves  - they are so beautiful yet water flows inside them. Before exploring these caves you may be lucky to find yourself driving your jet bike beside of dolphins. Jet Ski in Tenerife is the best when you taking 2 hours long Jet Ski Tenerife Explorer Tour. This is optimal time, if you wish to have the ride full of joy. If you look for a shorter trip then consider  Jet Ski Tenerife Discoverer trip. Next cheaper option is 40 minutes of Jet Ski Safari in Tenerife and then the cheapest Jet Ski Trial Circuit that give you 20 min jet ski ride to understand if you'd like to drive and have more of Jet Ski in Tenerife. 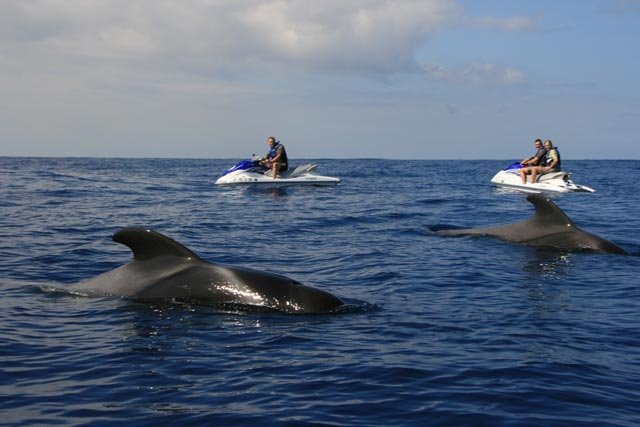 There are different jet bikes in Tenerife depending on the age and power. If you need a high speed jet it always better to book longer jet ski tours - for these tours the best jet bikes are used. To have a good experience it is recommendable to understand how tours by Boat tours in Tenerife works. Booking 1 or 2 hours Jet Ski in Tenerife, you can organize a friend jet skiing race. After hiring the jet you can have a friend race in the ocean which is more fun than a single run. All required is two of you know how to drive the jet and are able to drive safely without creating danger for the other jet ski tour participants. 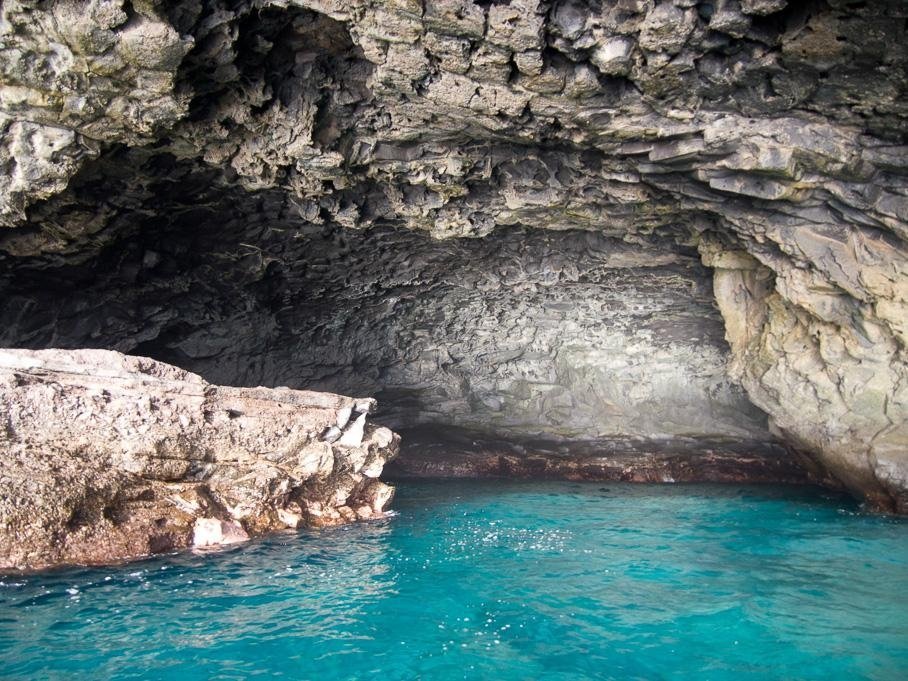 Jet Ski in Tenerife  is highly recommendable activity not just because good jet bikes available, but also from the tourist reviews. The positive reviews of jet skiers in Tenerife motivates everyone to visit the island and have this exciting experience. Like the experience to see dolphins or whales swim along with you is quite a lifetime memory for everyone. The experience to enter the caves is equally amazing as the reviews to the place say it. All the reviews about how safe assured one gets and accompaniment by the driver makes Jet Ski in Tenerife recommendable water sport activity. 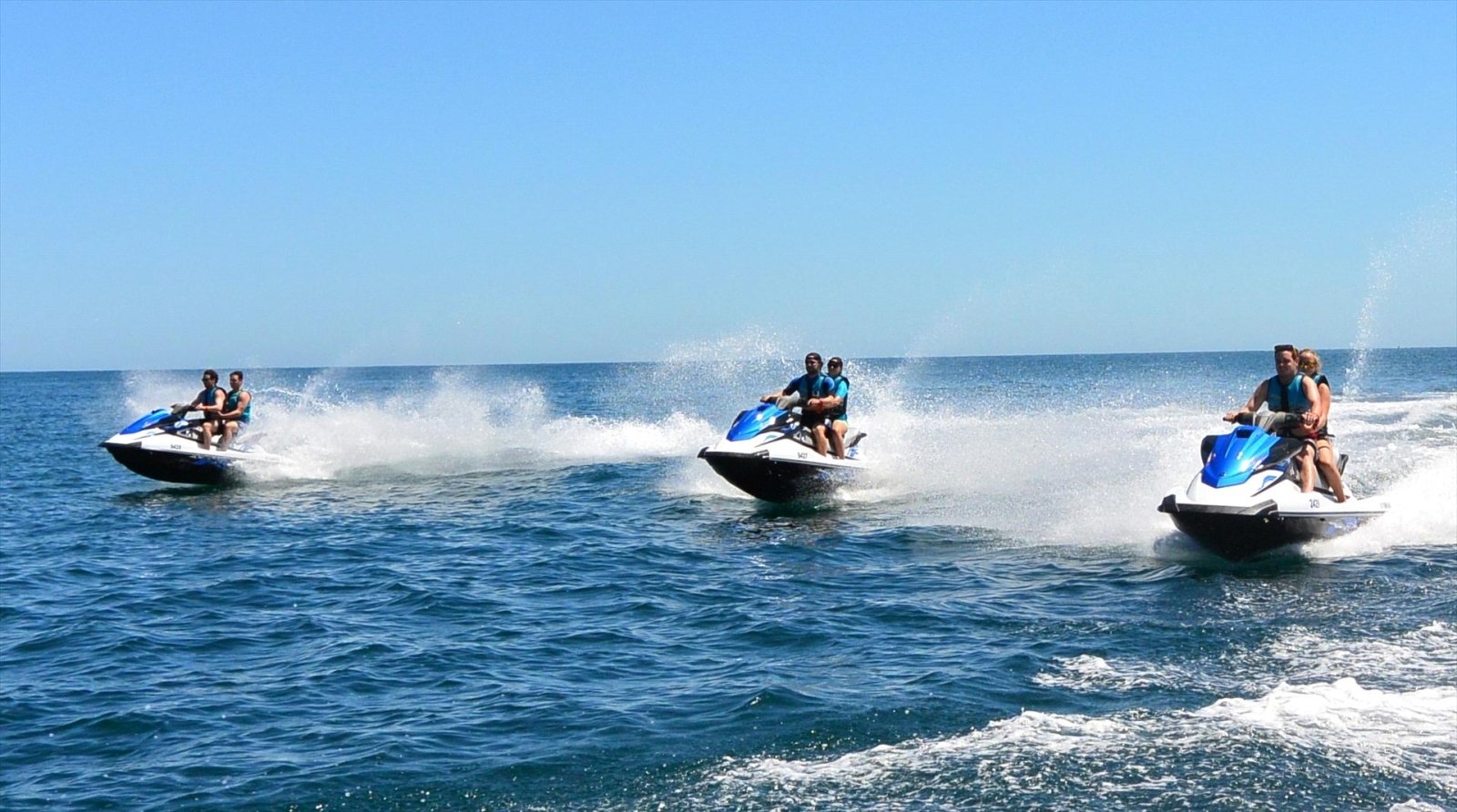 The weather is quite key and favourable for Jet Ski in Tenerife. The warm and clear sky weather gives trust to the tourist of their safety. You can swim any time as the water by the beaches of Tenerife is warm enough almost always.

For 2 and 1 hour jet ski tours you are usually picked up directly from your hotel, if it's located in Tenerife South. For shorter safaris and circuits you generally must come by yourself to an exact pick-up point by the nearest beach.

Looking for more activities on the island? Read our article about TOP-100 Things to Do in Tenerife.