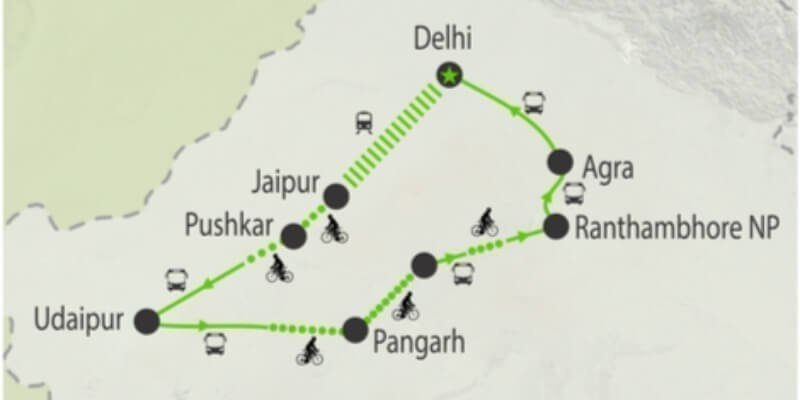 13 Days Rajasthan Cycling Tour. Trip to India and cycle the quaint Rajasthan region. Cycling tour from Delhi to Jaipur, Pushkar, Udaipur, Ranthambore and trip to the Taj Mahal of Agra, one of the most popular places to visit in India. 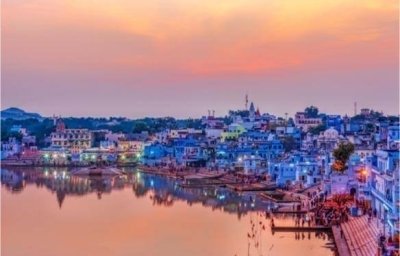 13 Days Cycle Rajasthan, A chance encounter with farmers who know none of the subtleties of reserve, just an unabashed curiosity and a broad, welcoming smile on their lips; the joys of sipping sweet milky tea at a village where the only visitors in all likelihood would be other kinfolk; back roads splitting their way through rural areas where the heart of India resides – these and all the iconic sites cross paths as you cycle your way around a piece of Rajasthan.

13 Days Rajasthan Cycling Tour. Trip to India and cycle the quaint Rajasthan region. Cycling tour from Delhi to Jaipur, Pushkar, Udaipur, Ranthambore and trip to the Taj Mahal of Agra, one of the most popular places to visit in India. 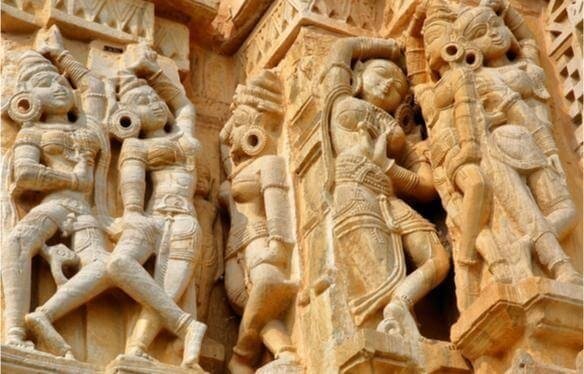 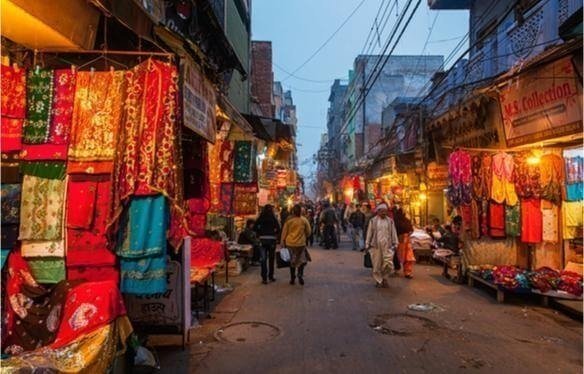 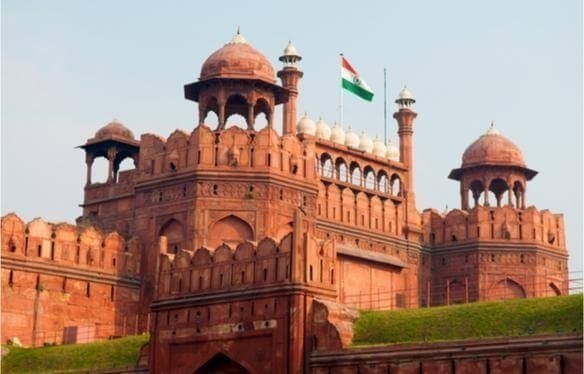 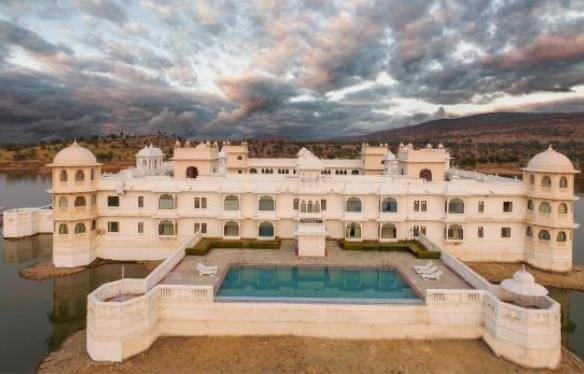 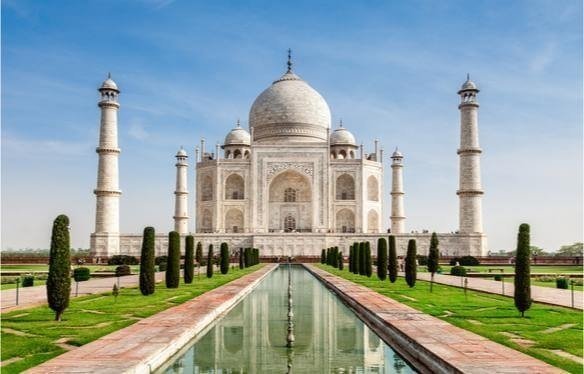 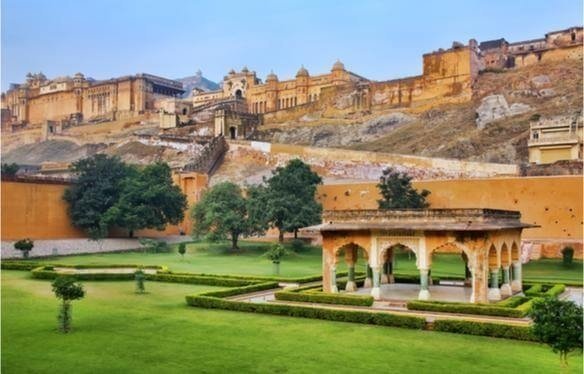 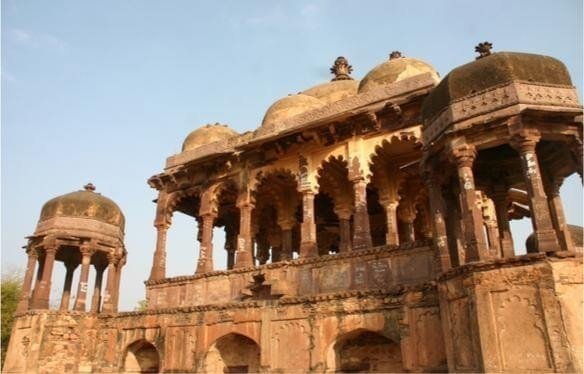 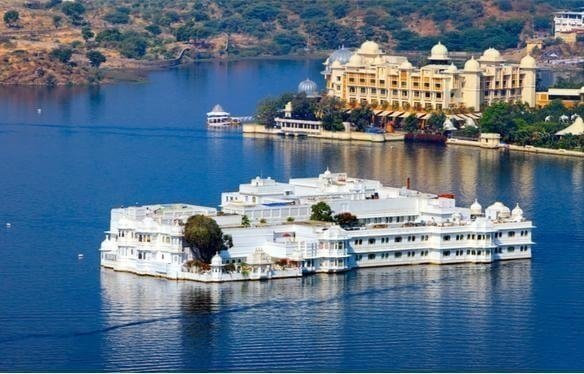 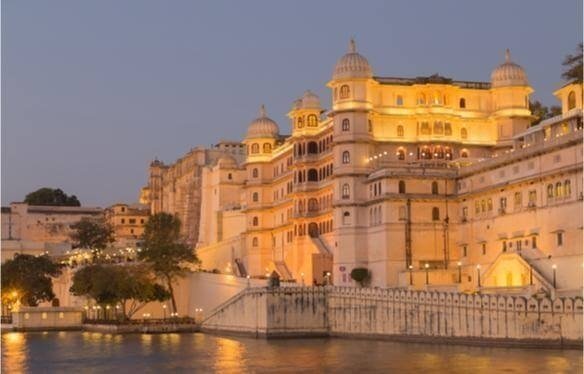 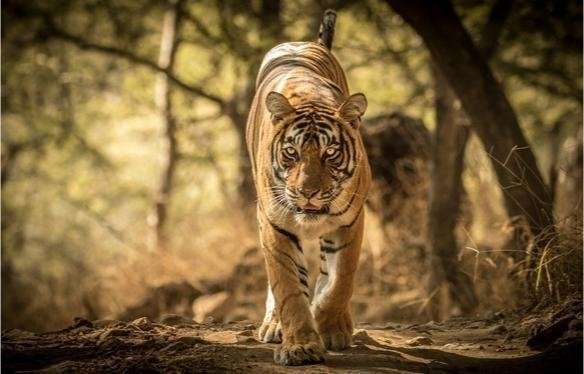 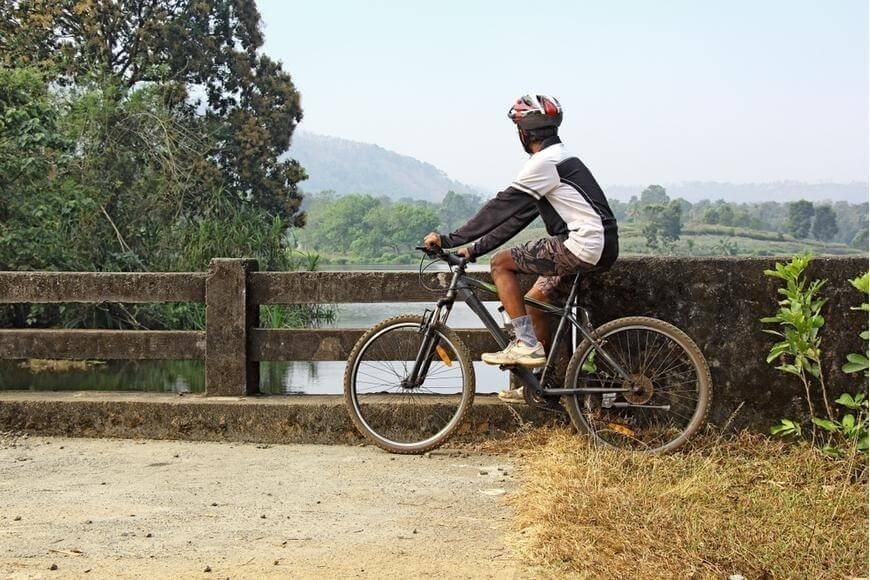 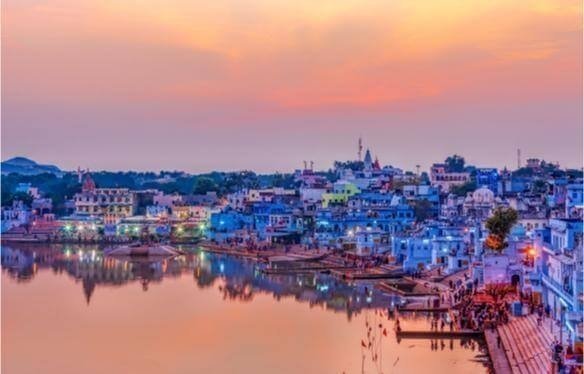 Namaste and welcome to Delhi! Our representative will be at hand at the airport to greet you. Once you’ve settled in at the hotel, go out for a stroll until you meet up at 6 pm with your tour leader and fellow tour members. Join them for an optional meal thereafter, and savour your first evening of the tour.

Rise early in the morning to beat the Delhi traffic and give your cycles a beta run over approximately 20 kms through the diplomat’s enclave, punctuated by a stop at the historic India Gate. Get some breakfast under your belt after this giddy but exciting experience and then trawl through the narrow alleys of Old Delhi as you step into a blitz of noise, colour, historic buildings and hole-in-the-wall shop fronts strung together by overhead wiring that’s as crazy as the activity below. Return to your hotel – and a semblance of order. In the afternoon prepare for a train ride to Jaipur in the evening.

Strike out in the morning for the fairy tale like Amber Fort, perched on the Aravalli Hills and surrounded by its protective wall. Learn about its history and the equally captivating tales of life within its walls. Drop in at a co-operative for a brief demonstration on cutting and polishing gems as well as a hand block printing demonstration, two of Jaipur’s most famous offerings to the world – before lunch. Head back to the hotel after lunch or wander around the brick coloured facade of Jaipur’s Old City and who knows what stories you might uncover amongst the millions that it hides of its past.

Cover the highway on your coach until you get to Narena, the starting point of your ride. Pedal past the mustard fields that spray a sea of bright yellow paint on the earth, past busy little towns, a clutch of forts and then stop for a packed lunch en-route. Ride further on after lunch until you get to Pushkar in the evening. Take in the atmosphere of the holy lake here, as a motley mix of sadhus, pilgrims, cows and hippies take centre stage.

Wind your way through the changing semi-arid landscape, negotiating the undulations and bends as the common sight of lush farmlands part to make way for thorny acacia trees and brightly costumed women drifting through the stark landscape. Become a celebrity as you stop for some tea at a local vendor and then keep the wheels turning until the back roads end. Climb on board your coach and settle in for a nice, long drive all the way to Udaipur.

Take your bikes out for a spin around the Fateh Sagar Lake – one of seven lakes hosted by the city – in the morning before visiting the imposing City Palace, its eastern walls washed by Lake Pichola. Wander through the exhibits and once you’ve completed the tour, take a walk through the town itself with its traditional miniature painting and silver jewellery shops, cafes, restaurants and coffee shops. Later, as the day draws to a close, board your boat for a ride around Lake Pichola and watch the setting sun throw shades of crimson on its placid waters.

Transfer to the outskirts of Chittorgarh this morning and start your ride from the narrow roads that shape their way across the Vindhyachal Hills. Feel the wind in your face as you plunge through some thrilling downhill sections and make your way across some of the scantiest human habitation on the tour. Thread your way through the friendly folk of blink-and-you-miss-it villages, sometimes with leafy forest cover on either side, sometimes with the burnished rocks exposing a rugged land. Keep riding until you reach the campsite set right in the middle of nowhere – an ideal spot to get away from it all. Take a walk around the area, go boating or just sit along the edge of the lake, watching the water birds skip across lotus pads and donating their two bits to the serenity of the place.

Wake up to the sounds of a kingfisher piercing the lake or lapwings shrieking at the dawn. Relax for a few hours longer before you tumble out of your tent because today is a day of easy riding and we’re not in tearing hurry to get to our next destination. After a leisurely ride, transfer to your hotel set right in the middle of a lake. Later during the day, step on solid ground and visit a nearby village to see what life means for the people who live in rural India. Wander through this tiny village, have a glimpse of their daily lives and share a smile or two with its inhabitants as you stroll along its length.

Today is the last day of riding. Leaving the idyll of Parsoli, ride on to Ranthambore National Park, touted as one of the best wildlife sanctuaries in India to see the tiger in its natural habitat. Conceived and established in the 80s, conservation efforts at Ranthambore have resulted in a slow but positive resurrection of the tiger population and although all sightings are based on luck, there’s no harm in crossing your fingers to add an extra bit to that possibility. Bid farewell to your bike crew at the end of the ride today.

Start out in the wee hours of the morning as you embark on a hunt for the admittedly elusive tiger. Catch a glimpse of the parks many denizens as you drive into the heart of the jungle – chief among them being the sambar deer, blue bull antelope, langur monkeys, boars, mongoose, sloth bears and a variety of birds. Get some breakfast into your tummy after the safari and if you haven’t spotted a tiger in the morning safari, don’t give up the chase yet because an evening safari might just be the thing to make both you and the tiger sociable!

Today is the biggest day yet as you drive towards Agra in the morning. Settle in at the hotel for a bit as you reach Agra and as the afternoon draws on, enter the portals of the Taj Mahal, justifiably one of the wonders of the world. Spend a couple of hours inside the complex studying its aesthetics; contemplate on the magnificence of human achievement writ large on its symmetry and slowly filter out as the sun hints at the hour of exit.

Before making a full circle and driving back to Delhi, take the last opportunity of viewing the Taj Mahal, as the wistful Emperor Shah Jahan must have done from his quarters at Agra Fort, the scene of his imprisonment. Trace the tale of this tragic emperor alongside a nuanced tour that gives the fort a robust form and shape; and following the fort visit, observe the subtleties of weaving carpets as it was done during the Mughal era before clocking the miles on the highway to Delhi. The tour isn’t officially over yet so come together for a final dinner and drink to happy times before saying goodbye.

It’s time now to bid farewell to your tour leader and new friends but not without a backpack full of memories. Departure transfers are included on the day. Please consult with your tour leader or the hotel desk to confirm the check out time.

How much time does the 13 Days Cycle Rajasthan take? 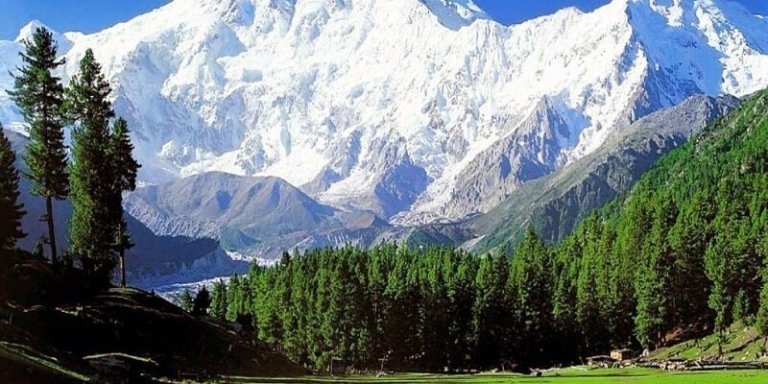 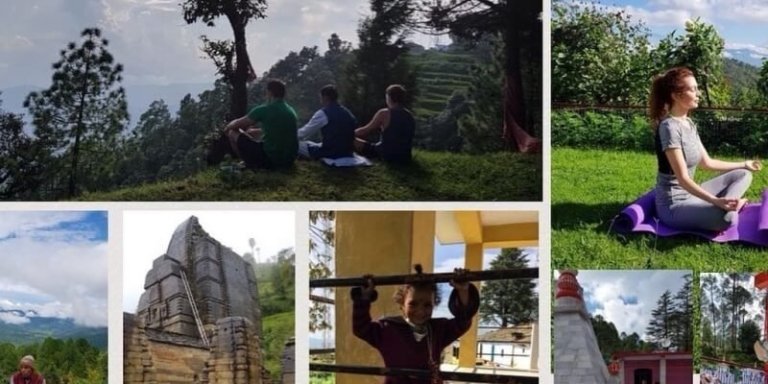 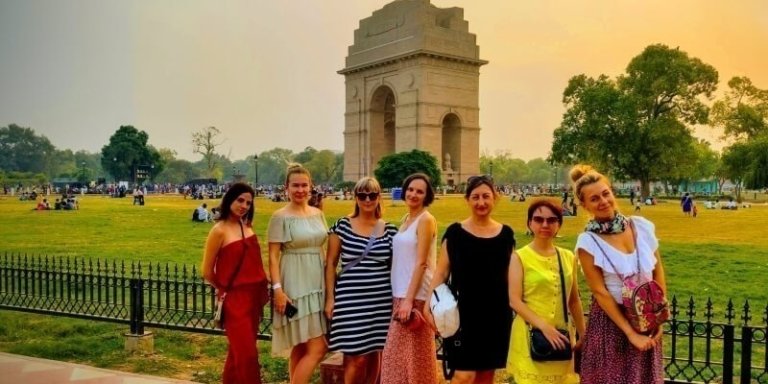 Golden triangle tour with Khajuraho is going to be an amazing tour which will offer you a chance to explore the best of cultural and spiritual temples and monuments of India.Visit some of the most Read more ➤ 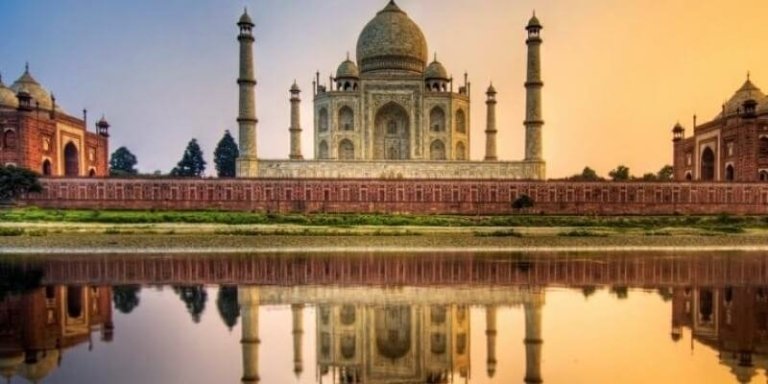 Enjoy a Delhi sightseeing tour with an overnight trip to Agra to visit the Taj Mahal and Agra Fort. Check out the Taj Mahal by sunset or sunrise and explore the many attractions and bazaars of Delhi. Read more ➤ 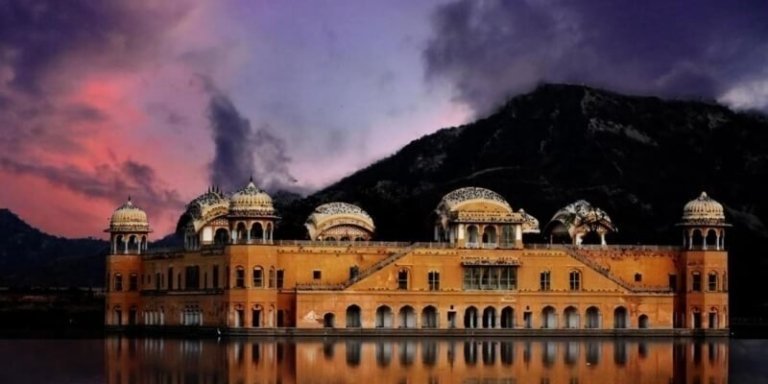 The Golden Triangle Tour covers the 3 most prominent tourist destinations in the heartland of India i.e. Delhi, Agra, and Jaipur. These tour packages offer one of the finest cultural experiences in Read more ➤ 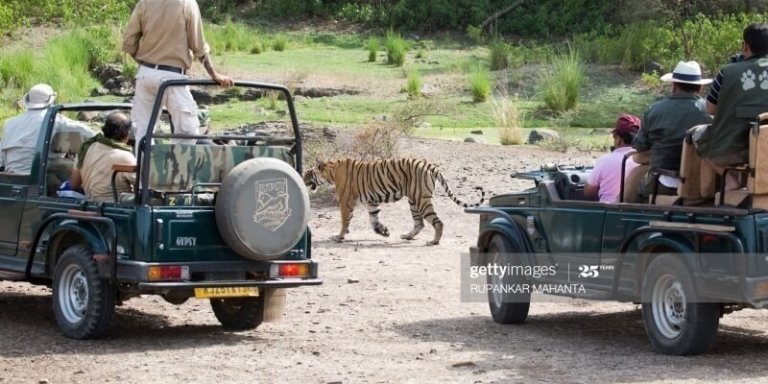 Golden Triangle Tours is a classic introduction to India especially for the first-time visitor to India. If you've never been to the subcontinent before, start here for it could not get any better Read more ➤ 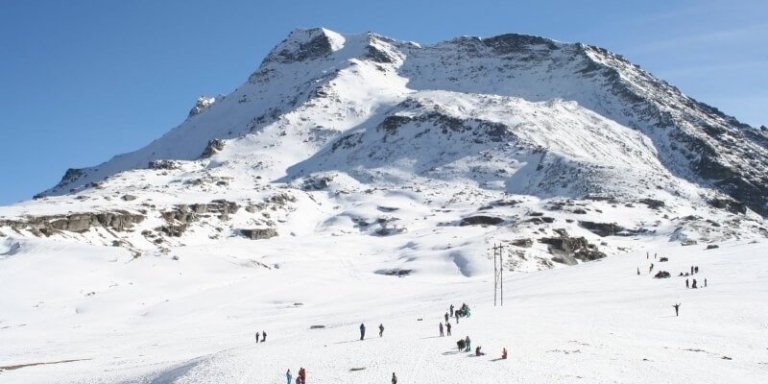 The beauty of nature is its most loved tourist attractions Shimla and Manali. To get the best experience of these hill stations is the Magnificent Shimla Manali Tour. These 5 Nights and 6 Days Read more ➤ 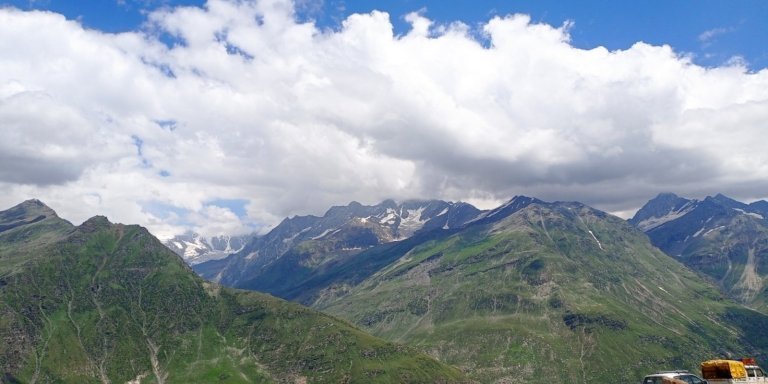 Explore the mighty Himalayas in Himachal Pradesh, North India. Bring your winter gears and prepare for a trip of a lifetime through the snow-capped mountainous region. Try your hand at paragliding, Read more ➤ 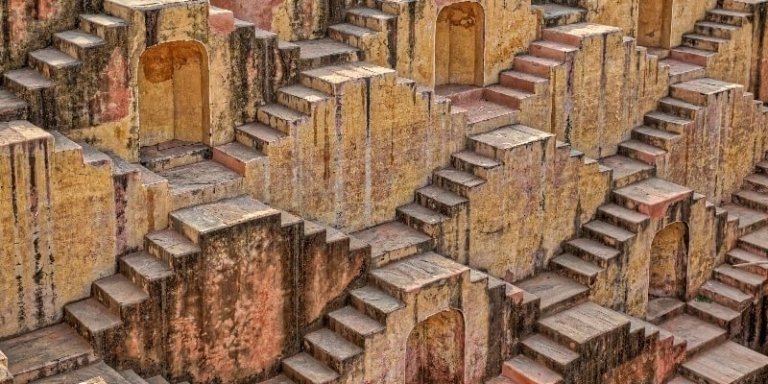 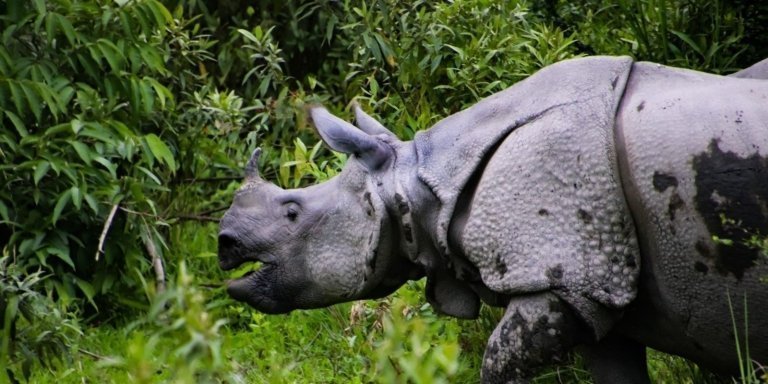 "Discover Activities, New Delhi" takes you to Kaziranga National Park, home to largest population of the one horned rhinoceros in the world, has one of the highest density of Bengal tigers. Read more ➤