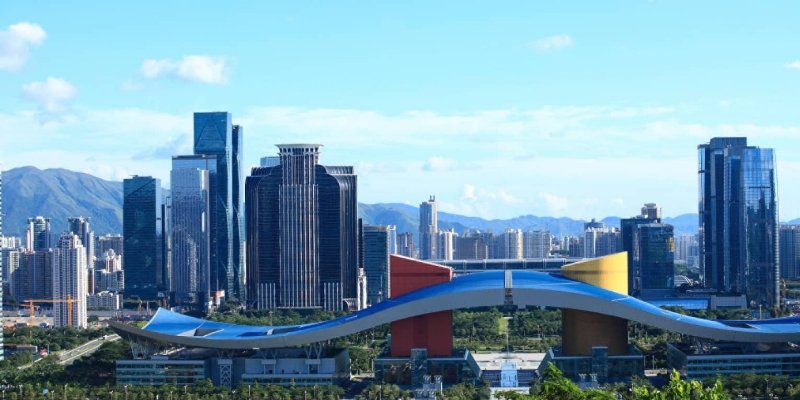 Things to do in Shenzhen

Things to do in Shenzhen

There are a lot of things to do in Shenzhen - a modern city located in south-central Guangdong province, southeastern part of China. The city lies along the coast of the South China Sea. It has risen from a small border town into a beautiful metropolis since its inception as a special economic zone over the past 30 years. The city links China's mainland to Hong Kong.

Things to do in Shenzhen for everyone

Visiting Shenzhen whether to live or for a short trip will always give you an opportunity to experience some of the world major attraction sites among them massive shopping malls and multicultural dining, splendid China-Folk Culture and Ethnic Villages, nature and ecological parks, theme parks and thriving arts, music scenes and nightlife. In this blog we introducing main things to do in Shenzhen. 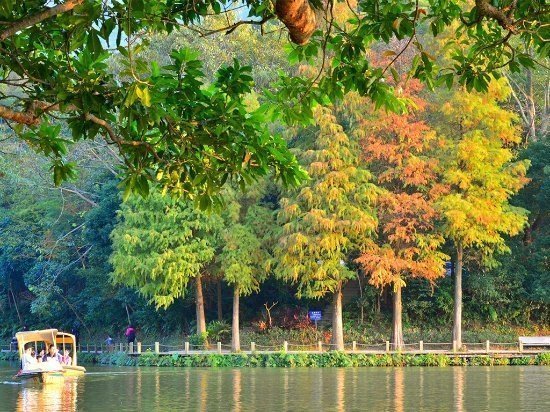 This arboretum and botanical garden was built in the year 1983 and later opened to the public in 1988. It is situated in the eastern suburbs of the city of Shenzhen and leans against the Phoenix Tree Mountain. The garden is characterized its colourful flowers, rare plant species, and fascinating Chinese architecture also consist of 17 special gardens to meander through, paddle boat to take around the fairy lake, a museum and spacious lawns for adventure and picnics. The park is home to more than 3,000 species of plant species serves as a center for conservation research and hosts one of the largest Buddhist temple, the Hongfa Temple. 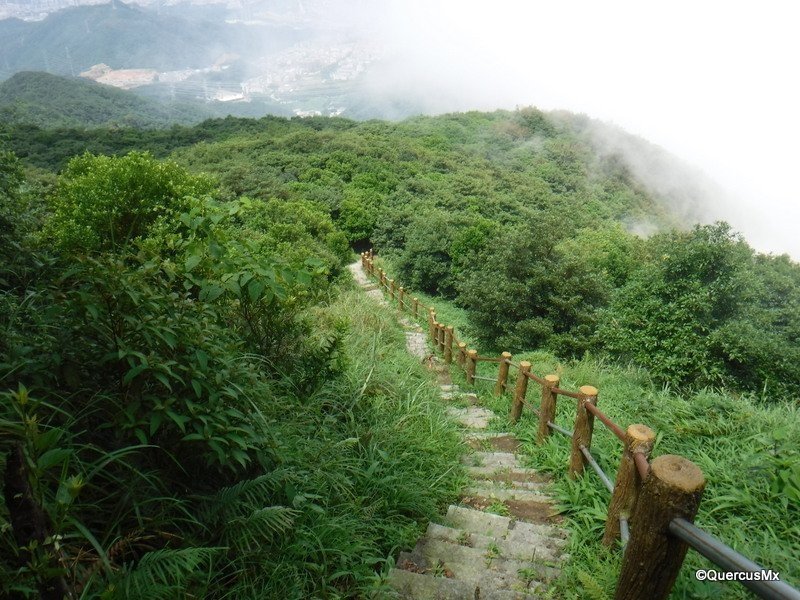 The 11.2 Km loop route to the peak of the mountain and back is a popular site for tourist and locals who look to boost their fitness levels. The hike normally takes four to five hours to reach the summit has features like rivers and waterfalls along the way, as well as stunning looks of the Shenzhen coastline and Bay either during the day or at night. 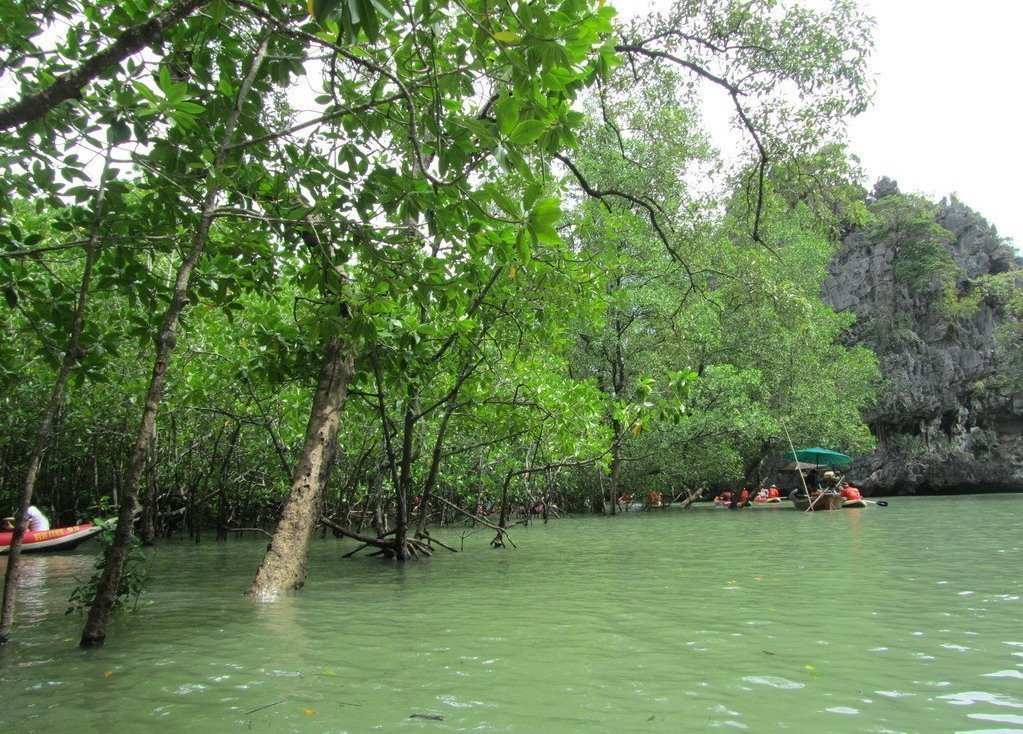 The Ecology Park is on our list of things to do in Shenzhen and it's home to about 200 different species of birds and 16 plant species some of them considered endangered. Located in the northeastern coast of Shenzhen Bay, the park is toured by approximately 100,000 migratory birds that come to rest and spend the winter. The Mangrove Seaside Ecology Park is not only considered the perfect place for bird watching but also sea view and nature walks. Hong Kong Mai Po Nature Reserve and Shenzhen Mangroves constitute the Shenzhen Bay wetland ecosystem is now considered one of the most important ecological features along Shenzhen-Hong Kong border. 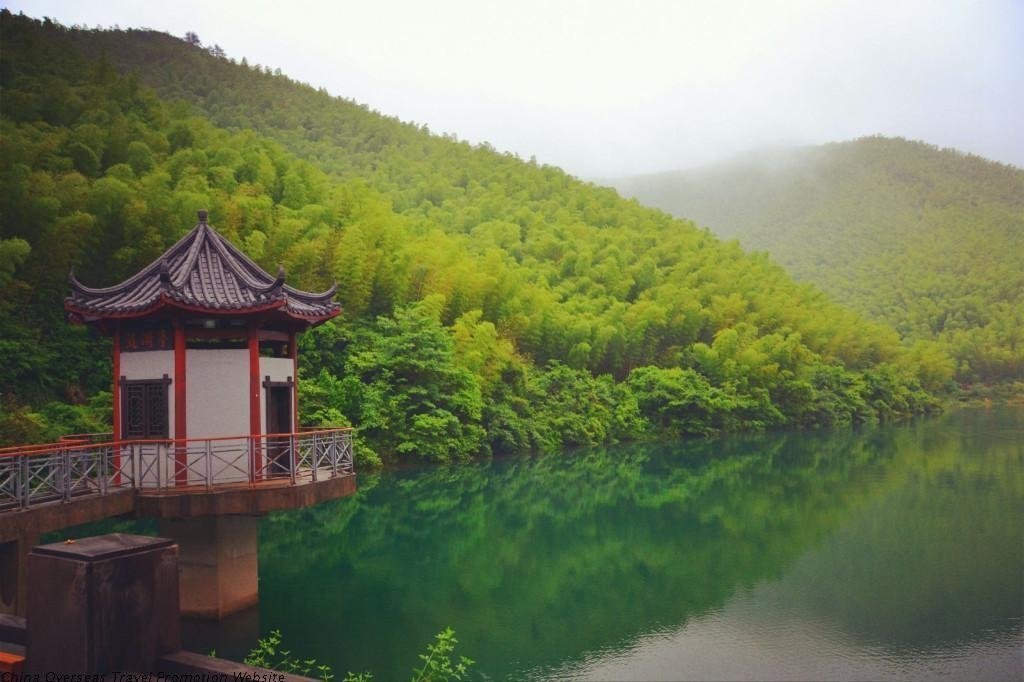 Also referred to as Nan Shan Park, the Nan Shan Mountain is one of the most popular mountains in Shenzhen because of its remote and tranquil location, Clear Ocean bay sightseeing and not so difficult terrain hence easier climbing. The mountain is about four hundred meters in height with a medium altitude and can be accessed through three entrances; Nan Shan entrance, Haiguan entrance and the Lilin entrance near the Nan Shan Avenue.

Luohu Commercial City - is the place to visit for shopping lovers 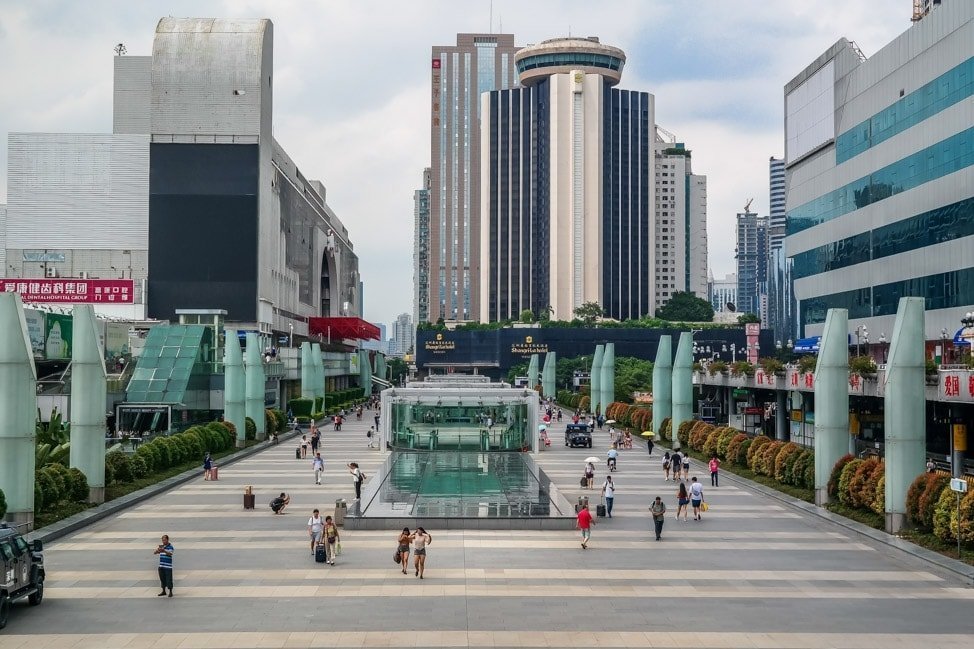 Located directly opposite the Shenzhen Railway station at the Luohu border, the market is among right things to do in Shenzhen for those who love shopping. It features five floors filled with retailers selling a diverse range of goods including men, women and children's wear, jewellery, toys, watches and much more. Many of the sellers in the market speak in English to enable them to sell their products, this makes buyers who do not speak Chinese get less worried and probably haggle for a better deal.

Dongmen Market can't be missed from your list of things to do, to see the mix modern and traditional China

The market has been in existence for approximately 300 years and considered as one of the most popular places for clothes shopping in Shenzhen. It also multi-level mall or stalls that are dedicated for different products like the East Gate Shoes City, Hongkai Craft City, Langfang Animation and Comic City and Boya Art Mall for musical equipment, art supplies, and traditional Chinese paintings. Eateries are also within the market with brands like McDonald's, KFC, Ajisen Ramen, Starbucks, Pizza Hut, and Cafe De Coral present. 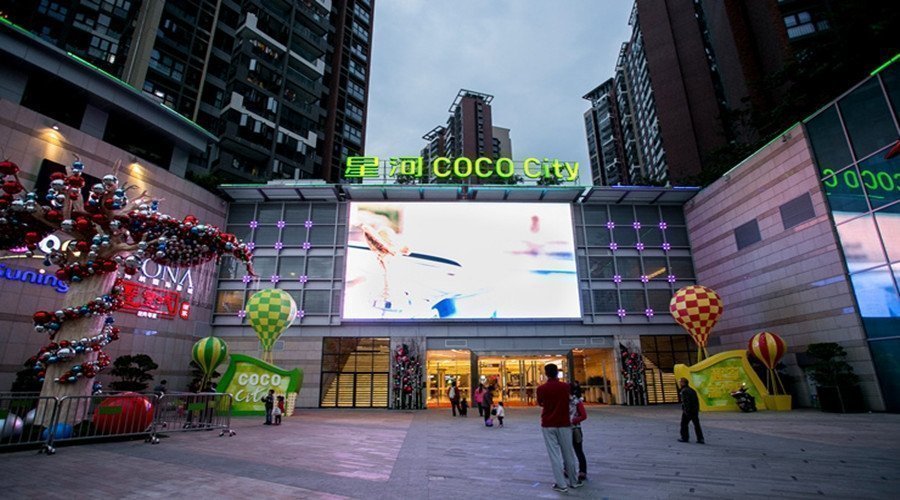 This amazing shopping complex was established in 2007. It is situated in the Futian District in Shenzhen. The mall that covers 85,000 square meters of space and has five levels features much more than just a shopping mall because of a lot of bars, restaurants, large public spaces and entertainment joints in it. The mall has a large supermarket at the basement floor, local and international fashion brands, a busy bar street located on the east side of the mall, cinema theatres, children's playgrounds and a number of restaurants with Asian and Western cuisines. 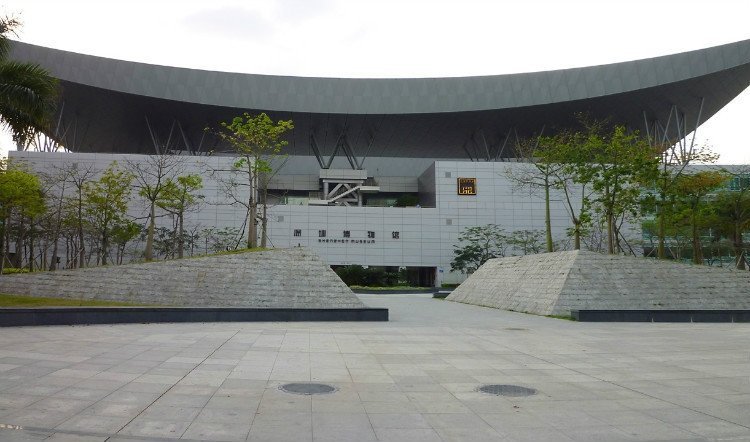 The museum is ranked among the First Grade museums in China attracts more than 1.5 million visitors yearly was established in 1981. It has three venues namely: the Museum of Ancient Art, the Ye Ting Guerilla Command Memorial Museum and the Museum of History and Folk Culture. This museum simply must be on the list of things to do in Shenzhen. Shenzhen Museum is involved in collection, research, protection, and public education has made achievements in different fields such as Shenzhen history, historical things and relics and Shenzhen’s reform that makes it one of the most important institutions in the public culture service system. 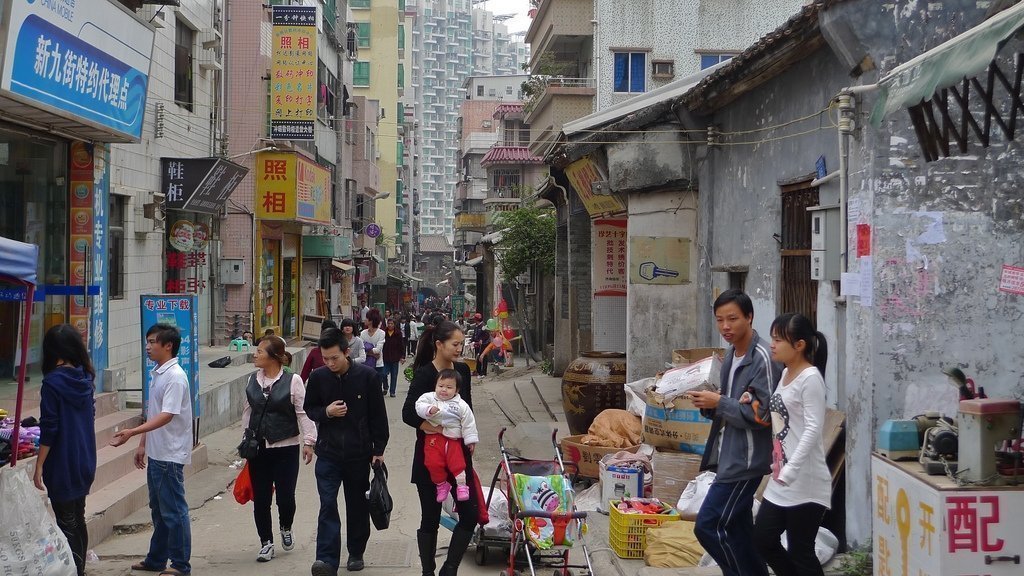 This historical monument has been in existence since the 4th Century is located Nantou, Nan Shan District in Shenzhen. It was the home of the former Bao' a County People's Government and was used to surround Hong Kong and Shenzhen. The ancient town has managed to the flavour of the Cantonese town throughout the ages despite a majority of the ancient or old town demolished during the urbanization era to pave for residential buildings. The ancient city still hosts a number of historical buildings namely; a silver shop, Naval and Civil headquarters, the Guan Yu temple as well as the Ming dynasty wall and the gate. An interesting thing to do in the city having more time for visit.

The temple is dedicated to Tianhou the goddess of the sea; it was built in 1410 during the Song Dynasty.  Tianhou who is also known as Matsu by the Asian coastal people protect people who are dependent on oceans including the sailors and fishermen as she is worshipped in Fujian, Taiwan, Hong Kong, Macau, and Guangdong. The goddess was born on an island off the coast of China approximately in 960 AD. She is regarded as an excellent swimmer and gained her “goddess”  status after effortlessly lifting and saving her brother from the sea during a typhoon.

The Window of the World theme park 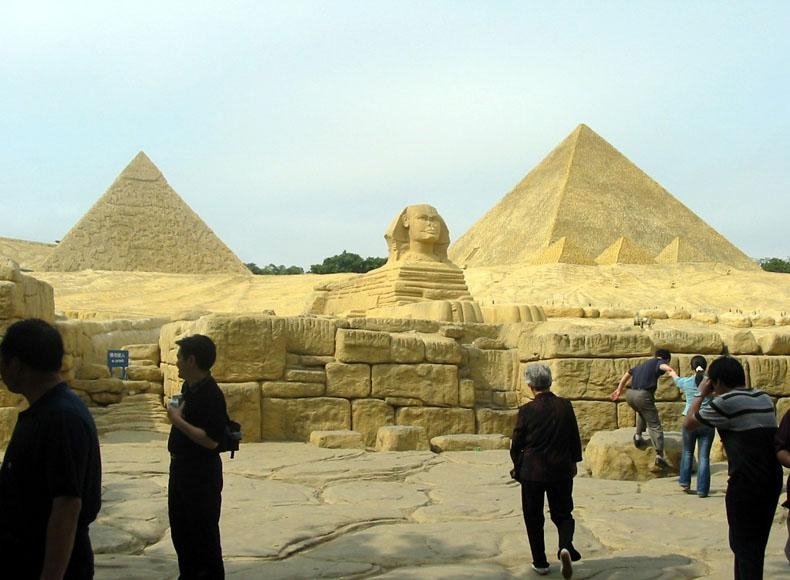 The window of the World is a fantastic replica park opened in 1993 and is located in the western part of Shenzhen city.  The theme park features 130 replicas of the world's major tourist attraction sites in each continent except Antarctica, which is packed into just 118 acres of space. The park hosts a variety of festivals yearly as well as it features different environments found all over the world like the reproduction of the Niagara Falls. Is an interesting place to visit and your visit here could be also placed on your list of things to do.

Located in Nan Shan District of Shenzhen City, Happy Valley covers an area of 350,000 square meters. The modern park was established in 1998 and boasts of nine theme areas which provide exciting amusement for both adults and children. The nine theme areas are; Cartoon City, Spanish Square, Gold Mine Town, Typhoon Bay, Happy Times, Playa Maya Water Park. Shangri-La Woods, Sunshine Beach, and Mt. Adventure. The park, which is among the first class national tourist attractions, has continually attracted local and overseas tourist with its large investments in the best amusement equipment.

Considered as one of the first marine-based entertainment venues, Xiaomeisha Sea World that l attracts millions of visitors from all over the world since its inception in 1998. The park lies east of Shenzhen covers an area of 185,000 square meters. It is the only park with an ocean theme features different segments which include; aquarium that is composed of shark and sea turtle pools and Bombay duck pond, ocean-wandering area, and science popularization area for extensive exploration of the sea world. It is often found on the list of things to do in Shenzhen for families. You can visit this amazing place with private tour to Xiaomensha Beach from Shenzhen. 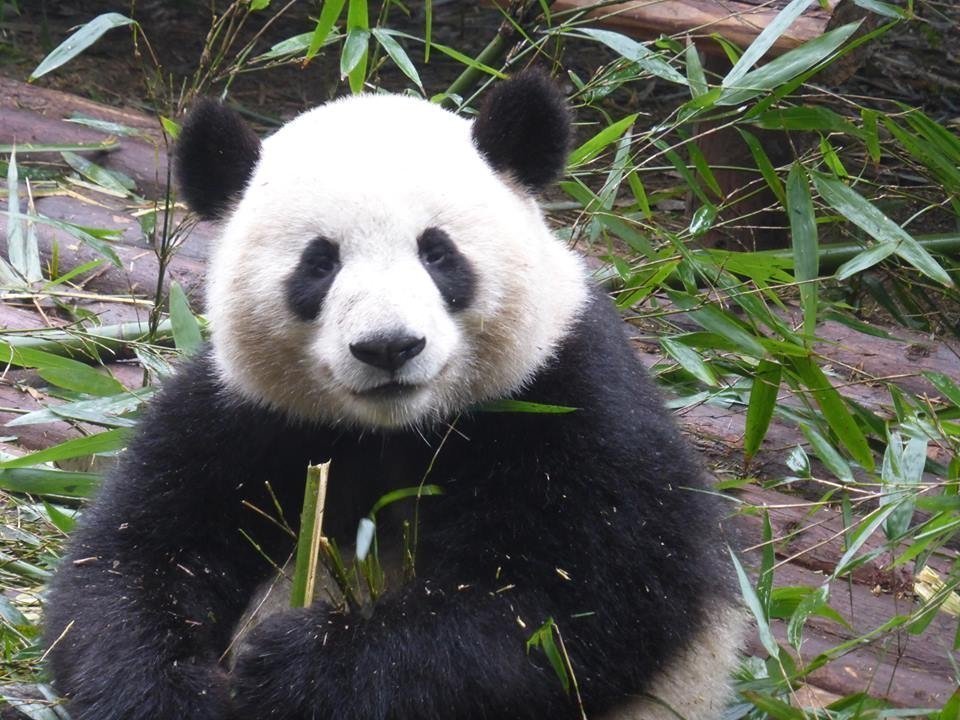 The zoo was opened in 1993. It is located near Xili Lake with the green mountains to the north. It covers an area of 640,000 square meters and is the very first zoo to have uncaged animals in China. The park hosts more than three hundred species of animals with all the animals (some of them rare species) living in the park getting to the number of more than ten thousand. Travelling with children it's hard to miss this Safari Park from your list of things to do in Shenzhen. Shenzhen Safari Park is divided into different zones, which is related to how the animal lives. The zones are:

- Wild Beast zone - this zone consists of the wild beasts, the Bengal tigers, Siberian tigers, wolves, bears, and African leopards all living in their own homes.

- Animal Performance zone where the area reserved for visitors to experience different performances by the animals.

Unfortunately, in Shenzhen people generally don't speak English, so it could be even hard to get to your hotel from the airport - to avoid unexpected situations you can book a private transfer from/to Shenzhen International Airport with the English speaking driver. Later you may will also like to do some nice tours with the English speaking local guide which will help you to have personalized and tailored trips absolutely up to your needs. There are much more local things to do in Shenzhen you can discover with a local guide including hidden gems, traditions and places you will never find by yourself or with a big group sightseeing tour.

Staying in Shenzhen it's hard to miss a day trip to Hong Kong and here you fill find a special blog introducing you the list of Things to do in Hong Kong.

See all tours and activities in Shenzhen