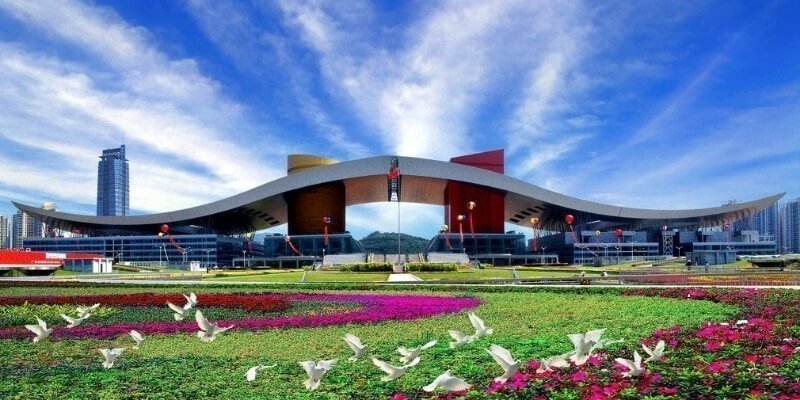 Shenzhen Civic Center is the new heart of Shenzhen in Futian district. The city hall is the most remarkable building in this area with a wing roof in the shape of a mythical bird (similar to a roc) named Dapeng, which is also the name of the Dapeng Peninsula and a district in Shenzhen.

Shenzhen Civic Center is the new heart of Shenzhen in Futian district, which is a government building with 84.7 meters heigh. The building's roof has 486 meters spans and 154 meters width. The city hall is the most remarkable building in this area with a wing roof in the shape of a mythical bird (similar to a roc) named Dapeng, which is also the name of the Dapeng Peninsula and a district in Shenzhen, it comprises a museum, a historical archive, a conferences room with a capacity of 2500 people and government offices, and other establishments. Shenzhen Museum of history and folk center Shenzhen Museum has more than 20,000 pieces of cultural relics, showing the civilization of China and historic materials about the development history of Shenzhen. Shenzhen Museum was established in 1981, Shenzhen Museum now has three venues: the Museum of History and Folk Culture, the Museum of Ancient Art and the Ye Ting Guerrilla Command Memorial Museum. Shenzhen Museum attracts more than 1.5 million visitors per year. It is a large comprehensive museum of collecting, protecting, researching, exhibiting and public educating. It has ranked among the First Grade National Museums of China. Shenzhen Museum has permanent exhibitions like Ancient Shenzhen, Modern Shenzhen, Shenzhen’s Reform and Opening-up History, Shenzhen Folk Culture and Wild Animal Specimens. More than 20 excellent exhibitions from home and abroad are introduced every year, which creates strong public interest. Shenzhen Museum is one of the most important venues in the public culture service system. Shenzhen Museum shows significant research capabilities and it has made great achievements in fields of historical relics, Shenzhen history, Shenzhen’s reform and opening-up history, folk culture and archaeology, etc. Wubeiling Site and Xiantouling Site excavated in Shenzhen were titled as one of the Top 10 Archeological Discoveries of China in 2001 and 2006. Shenzhen Museum is also an important site for the government delegations from home and abroad. Former Chinese leader from the central committee like Jiang Zemin, Hu Jintao, Li Keqiang, Wen Jiabao and other important delegations from other countries all visited Shenzhen Museum and confirmed the positive and successful exhibitions. In recent years, Shenzhen Museum has been conferred several honorary titles including National Scenic Spot of Red Tourism and Patriotism Education Base of Guangdong Province, Guangdong-Hong Kong-Macao Cultural Exchange Base and etc,. Shenzhen Book City Shenzhen Book City in Futian CBD is held to be the largest book mall in China with over 3 million books in residence. It is structured into different sections according to topic categories ie. bussines, music, art with a special section dedicated to imported books and other goods like toys and dvds. Amazingly, it is a 24 hour store and is the center-piece of the shopping mall complex. Book City also houses multiple restaurants and non-book related shops ie. cafes and other merchandise stores. Story-telling competitions are held every Sunday for children 4–8 years old for which you can call them for more information. If you want to buy some books, just cross the square to the biggest and newest bookstore of Shenzhen. Inside several restaurants, a small bookstore specialized in English books and the big bookstore with quite a good selection of English Computer Science books. Shenzhen Concert Hall Shenzhen Concert Hall is one of the city's most important landmarks which located in the central area of Futian District, it covers a surface area of 26,345 square meters and a total area of 41,423 square meters. The building is the work of Arata Isozaki, a Japanese avant-grade architect who enjoys an international reputation. It's a modern, professional work of architecture specifically designed for musical performances. Shenzhen Lotus Hill Park Shenzhen Lotus Hill Park is located at Hongli Road, Futian District, Shenzhen, China, it is a popular attraction in this city. In the South Zone of the park, there is a coconut tree woods that covers an area of 80,000 square meters, with tropical and subtropical scenery. The large coconut forest and the grass provide a beautiful environment space for visitors. The artificial lake aside covering an area of 30,000 square meters has clear water. There is also a 160,000-square-meter grassland and micro-topography-based kite square in the southeast. This park is near to children's hospitals, libraries, Children's Palace, Shenzhen Concert Hall, etc. 【Peak Square】 There is a square that covers an area of 4,000 square meters on the main Peak of the park. It is currently the highest outdoor plaza in the city of Shenzhen. It is the best place to overlook the downtown area of this city. In the north of square, there is a 300-square-meter City Planning Exhibition Hall. This hall is good location for the general public and visitors to understand the history of Shenzhen Urban Construction, to understand urban planning and the future development of this metropolis. 【Kite Square】 The large grass land in the park is an ideal place for kite flying, especially for kids. You can lie on the grass here, watching the sky and being in a daze. 【Peach Grove】 In spring every year, there are more than 2,000 strains of peach blooming in the park, which attracts numerous local people and outside visitors to take pictures.

How much time does the SHENZHEN CIVIC CENTER AND MUSEUM OF HISTORY AND FOLK CENTER TOUR take?

You can book SHENZHEN CIVIC CENTER AND MUSEUM OF HISTORY AND FOLK CENTER TOUR at least in 2 days. Check availability calendar in "Book Now" form to see currently available dates.