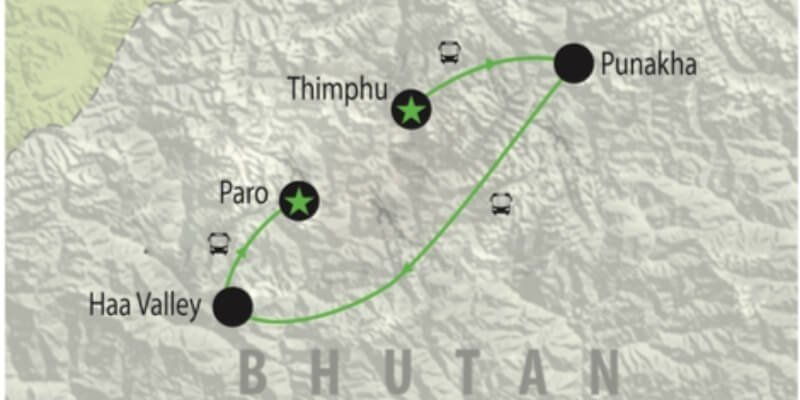 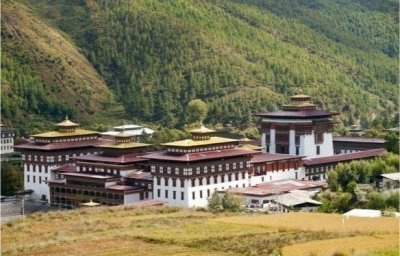 6 Day Bhutan Adventure, Bhutan is Asia’s best-kept secret. A Himalayan Kingdom landlocked in the Eastern Himalayas overshadowed and nestled between China and India-it is a relatively new travel spot, with many undiscovered secrets.Shrouded in mystic and magic Bhutan offers breathtakingly natural beauty with dramatic landscapes- subtropical plains, steep mountains and valleys that will leave you in awe. Bhutan offers a unique culture heritage and has a main focus on the gross national happiness of its people. Fortified monasteries and scared mountains await you as you traverse this truly amazing country. 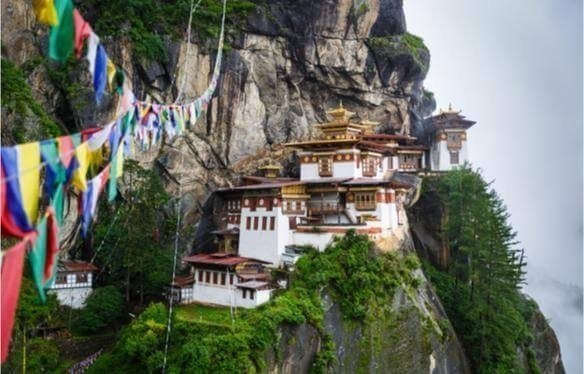 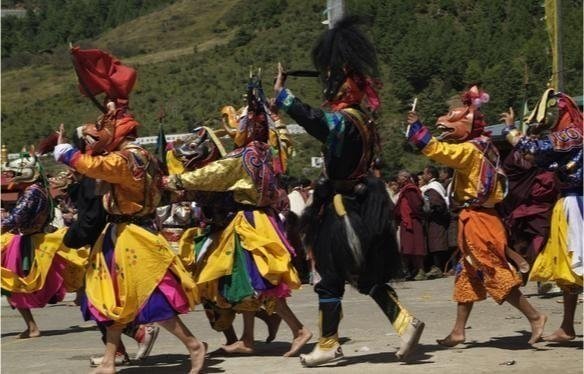 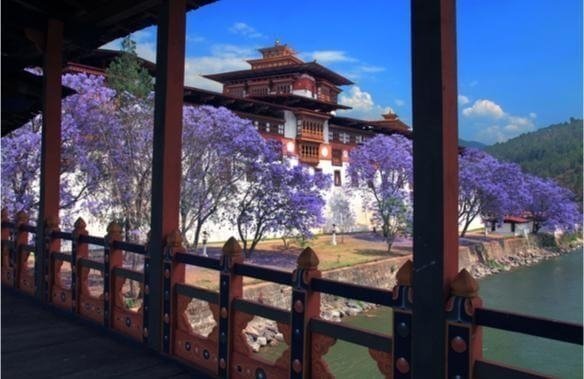 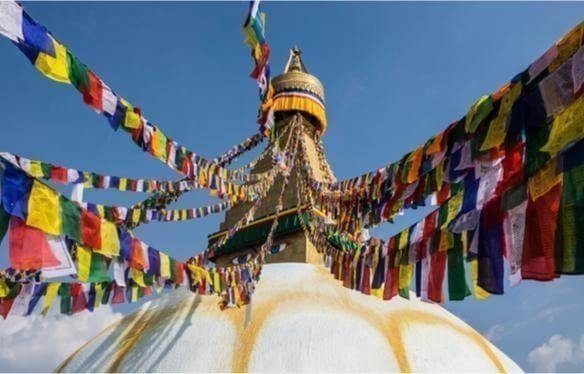 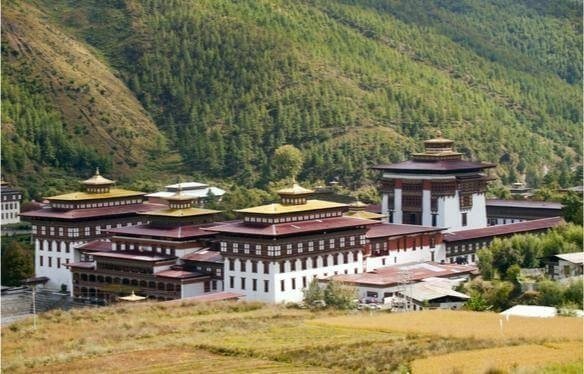 Welcome to Paro, upon touchdown our representative will be at the airport to whisk you off to the hotel. Drive through verdant forests and picturesque valleys until you arrive at Thimpu, the capital city of Bhutan. After checking-in meet your tour leader for a pre-trip briefing at 1pm then head out to get acquainted with the city as you step out for an orientation walk designed to open up your senses to first impressions and more. Later, sit back and get to know your fellow passenger over a welcome dinner.

Following breakfast, make a foray into the cultural aspect of Bhutan by visiting its most important centres of learning. Starting with the National Memorial Chorten-a monument constructed to commemorate the third Druk Gyalpo or Head of the Kingdom. Drift through the National Library that is a repository of Bhutan’s cultural heritage and Buddhist literature, and then end up at the Zorig Chusum Institute to observe young artists deftly move their fingers or hammer metals into shape, in an effort to keep the traditional arts of Bhutan alive and indeed thriving. Later in the afternoon, drive up to the Drubthob Lhakhang nunnery to observe snapshots of life as it is here, as well as the panoramic views that the road en route affords.

Follow the road to Punakha – approximately 3.5 hours drive via the Dochula Pass – ornamented by mountain vistas and hills that stretch out to the blue horizon. Once the afternoon settles in, walk through the rich green fields of paddy to end up at the Chimi Lhakhang or The Temple of the Divine Madman – a quirky temple built by an unorthodox Buddhist monk and listen to the story of its inception that’s just as quirky as its murals! Once you’re done visiting the temple, head across to the farmlands and get an insight into the day-to-day existence of its denizens here.

Explore the approximately 400 years old Punakha Dzong in the forenoon before driving out to Haa Valley. Despite the frequent fires and natural calamities that have wrecked damage to the Dzong, modern renovation and preservation efforts have kept alive its reputation as arguably the most aesthetic among all in Bhutan. Indeed, with the waters of two rivers washing its sides as well as green hills rising behind it, the prophesy of its construction and beauty does seem aptly consummated. Walk through its seven stories and then exit to drive for approximately 5 hours to Haa Valley, a quiet getaway cradled by pine forests, green hills and a river that crawls across the valley floor. Almost as if to live up to its name – Hidden Rice Valley – Haa lies suffused in stories wrapped in mystery, magic and myth, some of which you might uncover as you visit the Monastery of Lhakhang Karpo (White Temple) followed by the Lhakhang Nagpo (Black Temple).

Driving east, up the steep and highest pass of Chele-La, standing at 4200 metres, gaze at the distant mountains of Chomolhari (6700 metres) and Jichu Drakey before plunging down pine forests and rhododendron clad woods to reach Paro. When you get there, lace your boots up for a hike up the Taksang Tak Monastery, perched seemingly precariously against a precipitous cliff and ready yourself for a magnificent view of one of Bhutan’s most enduring images. Head back to Paro after this excursion and if you have the time, take a walk through the local market or sample some of the fare at a local brewery before ending your adventures over a last dinner.

It’s time now to bid farewell to your tour leader and new friends but not without a backpack full of memories. Departure transfers are included on the day.

How much time does the 6 Day Bhutan Adventure take? 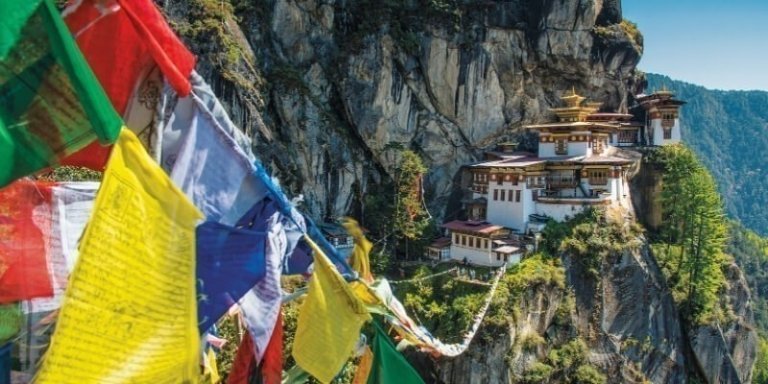 With the Bhutan Tour Package you are going on an exclusive 6 Days long Private Tour for you, your family or group of friends only. Discover Bhutan, this Himalayan Wonderland in the most comfortable Read more ➤ 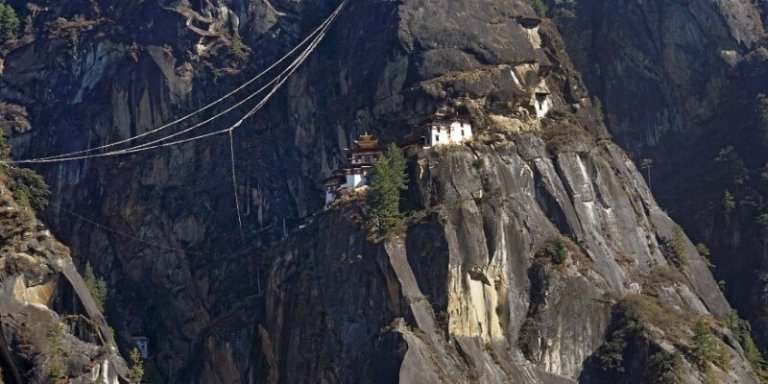 Our Splendour of Bhutan Tour Package will show the greatest option to uncover the interesting and one-of-a-kind cultural heritage of Bhutan. Tour through Thimphu and Paro and experience the beauty of Read more ➤