Tiger Safari & Marvelous Monuments of India tour will begin with pick up from Delhi airport. Explore Mumbai, India financial powerhouse, dotted with colonial era buildings & cave temples. Then fly to Jabalpur and begin the wildlife exploration visiting some famous national park having the

Tiger Safari & Marvelous Monuments of India tour will begin with pick up from Delhi airport. Explore Mumbai, India financial powerhouse, dotted with colonial era buildings & cave temples. Then fly to Jabalpur and begin the wildlife exploration visiting some famous national park having the largest number of tiger population. Embark on enthralling jeep safari in dense forest of Bandhavgarh, Kanha, Pench & Satpura National Parks. Continue to explore the Paleolithic age Bhimbetka rock shelters, Sanchi Buddhist stupas, Bhopal city & wetland. Travel by train to Agra and witness the immortal beauty of the Taj Mahal. Next visit the historic city Delhi & its Mughal monuments. At the end we will drop off you at Delhi airport. 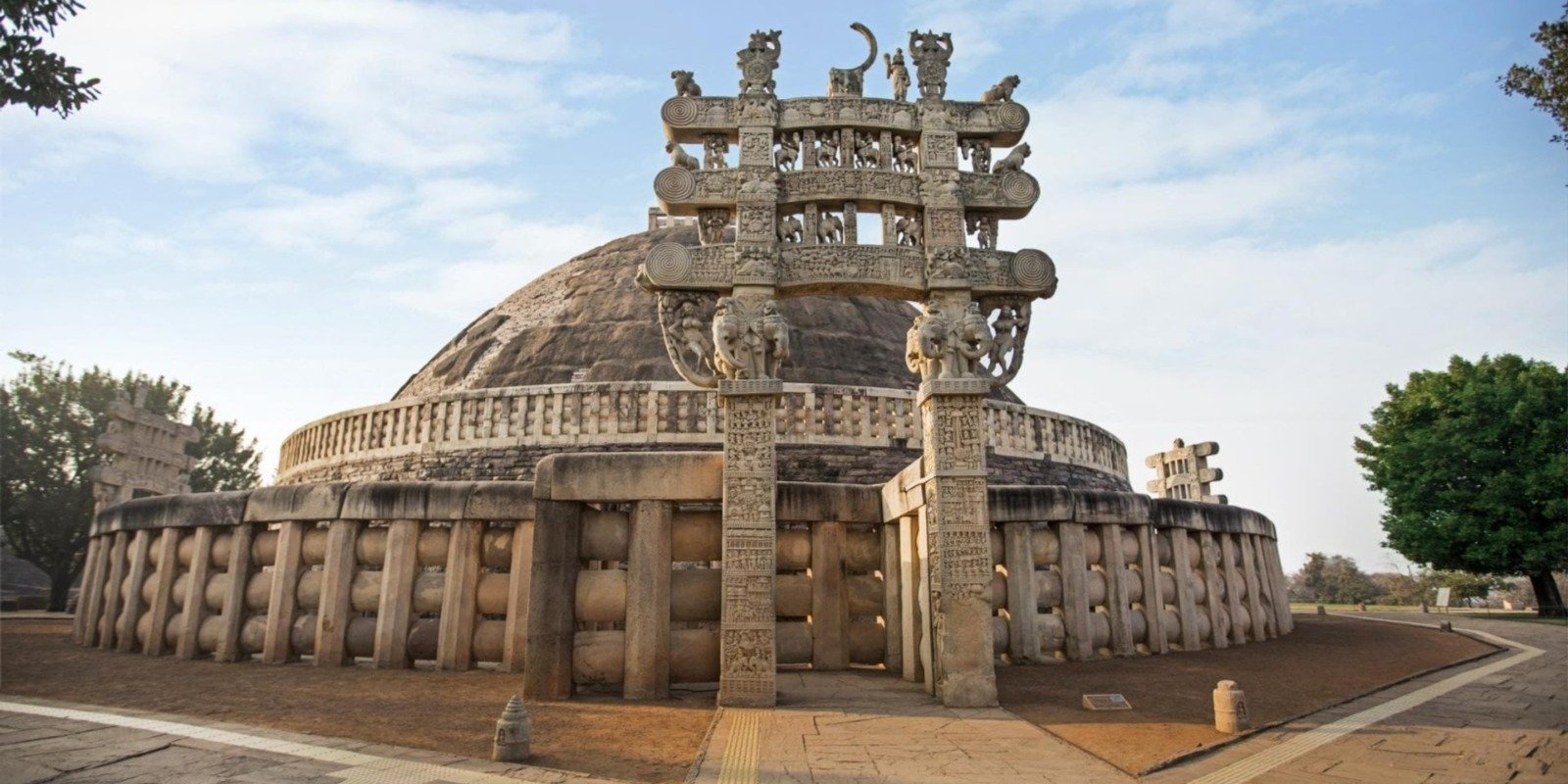 City tour of Mumbai. Drive via Marine Drive one of the most beautifully laid boulevards in the city to reach Gateway of India. Board a ferry from here to reach Elephanta Caves (Monday closed). A flight of 100 steps takes you to the top of the hill where caves are located. Afterwards cruise back to Gateway of India and then city tour. Drive pass CST & Parliament House. Visit Dhobhi Ghat to see the city famous open air laundry in action. Chhatrapati Shivaji Maharaj Vastu Sangrahalay, a grade I Heritage Building of the city counted amongst one of the most prominent museums of India. The complex exhibits a myriad collection of ancient artefacts, artwork and sculptors of the country which give a unique insight into our past. Overnight at hotel.

Transfer to airport to board flight for Jabalpur. Transfer to Bandhavgarh National Park check in & overnight at hotel.

Morning and afternoon gypsy safari in the tiger reserve with naturalist. This area is unique from the point of biodiversity, as it comprises hills, valley, rivers, marshes and meadows. Apart from highest density of Royal Bengal tigers in the world, 34 species of Mammals, nearly 260 species of birds and 70 species of butterfly are found in park. The remains of 2000 years old ancient Bandhavgarh Fort provide glimpse into its intriguing history where you will find several man made caves with inscriptions and rock paintings. Overnight at hotel.

Morning and afternoon gypsy safari in the tiger reserve with naturalist. Kanha best known for its evergreen Sal forests, is home to about 300 species of Birds, 43 species of Mammals, 26 species of Reptiles and more than 500 species of Insects. The Major species found are hard ground Barasingha, Tiger, Leopard, Dhole, wild dogs, Bear, Gaur, Bison and Indian Python etc. Overnight at hotel.

Drive to Satpura NP, check at hotel. Visit Panch Pandav Caves, these caves are believed to provide shelter to the Pandavas during their exile period. These 5 caves also became a shelter to some Buddhist monks in 1st century AD and thereafter it is considered to be religious by Buddhists as well. Jata Shankar Caves, considered sacred as they are popularly believed to be the place where Lord Shiva concealed himself from the wrath of Bhasmasur. The caves boast of a natural Shivalingam under the shadow of a massive rock and the stone formation in the cave closely resemble the mythological hundred headed snake Seshnag. Sunset visit Dhoopgarh the highest peak in the Satpura Range. It has an altitude of 1350 m. It is not only the highest point of Pachmarhi but also the highest point of central India. It is an amazing experience to see the sunset at Pachmarhi. Overnight at hotel.

Morning and afternoon gypsy safari in the tiger reserve with naturalist. The forest of the Satpura ranges are rich in biodiversity and are inhabited by many endangered species. The high ranges of the Pachmarhi plateau are covered by Sal forests, whereas dense teak forests are spread over its lower hill ranges. This large land is an important habitat for tiger, Giant Squirrel, Indian Skimmer, Black Bellied Tern, Leaf - nosed Bat and more than 300 species of birds. Overnight at hotel.

Drive to Bhopal enroute visit Bhimbetka rock shelters an archaeological site dating back to the Paleolithic age inhabited by the homo erectus more than 100,000 years ago. Bhimbetka is a world heritage site and houses one of the oldest cave paintings in the world, a must-visit site for all history enthusiasts. Next visit Bhojpur an incomplete 11th CE Hindu temple dedicated to Lord Shiva. The construction was abandoned for unknown reasons, with the architectural plans engraved on the surrounding rocks. It houses a 7.5 feet high lingam in its sanctum, considered to be one of the finest examples of temple architecture in the region. Arrive Bhopal check in & overnight at hotel.

Excursion to visit Sanchi a serene hill crowned by a group of stupas, monasteries, temples and pillars dating from 3rd BCE to 12th CE. Sanchi Stupa, a UNESCO world heritage site is home to the relics of Buddha and his followers. Built by the Mauryan emperor Ashoka in the 3rd century BCE, it is a remarkable specimen of Buddhist art and architecture. Sanchi’s uniqueness lies in the fact that Buddha isn’t represented by figures but through symbols. Next visit Udayagiri Caves, early Hindu ritual site, extensively carved and reworked under the command of Chandragupta II, Emperor of the Gupta Empire, in the late 4th & 5th CE. Udayagiri has a series of rock-shelters and petroglyphs, ruined buildings, inscriptions, water systems, fortifications and habitation mounds, all of which have been only partially excavated. Overnight at hotel.

Early morning visit Bhoj Wetland a Ramsar site consists of two lakes Upper and & Lower Lake a man-made reservoir and home to diverse flora & fauna. 179 species of birds, 43 species of fishes, over a dozen species of reptiles and amphibians (including five species of tortoise), 206 species of phytoplankton and 98 species of insects, all of which add up to a vibrant and thriving ecosystem. over a hundred sarus cranes (India’s largest avian species) have been observed congregating here. Other species sighted at this birders paradise are Eurasian wrynecks, roufous-tailed finch larks, white-throated kingfishers, white-bellied drongoes, black-headed orioles, western reef herons, grey-headed canary-flycatchers, Egyptian vultures and bay-backed shrikes. Transfer to railway station to board train for Agra.

On arrival transfer to hotel.

Sunrise visit Taj Mahal an ivory-white marble mausoleum commissioned in 1632 by the Mughal emperor Shah Jahan to house the tomb of his favourite wife Mumtaz Mahal, it also houses the tomb of Shah Jahan himself. Agra Fort the main residence of the emperors of the Mughal Dynasty until 1638. And Itmad-ud-Daula Tomb commissioned by Nur Jahan for her father Mirza Ghiyas Beg.

Drive to Delhi, check in & overnight at hotel.

Departure transfer to airport to board flight for onward destination.

How much time does the Tiger Safari & Marvelous Monuments of India take?