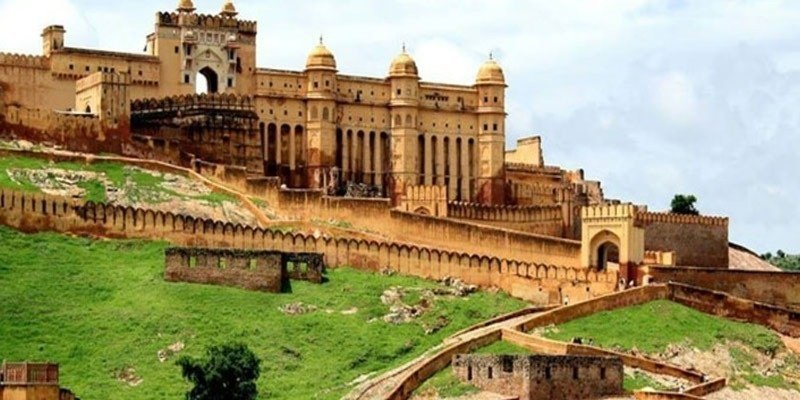 Start Your 3 Days Golden Triangle Tour As per your Flight Schedule Driver will pickup you from Delhi hotel or Airport. if you arrive earlier than visit some important site of Delhi. like Humayun Tomb, Qutab Minar, Lotus Temple. Evening depart from Delhi to Agra around 3 hrs drive from Express Highway evening check in Agra hotel. Overnight rest in Agra hotel.

Taj Mahal - The Taj Mahal is an ivory-white marble mausoleum on the south bank of the Yamuna river in the Indian city of Agra. It was commissioned in 1632 by the Mughal emperor, Shah Jahan, to house the tomb of his favorite wife, Mumtaz Mahal After Taj Mahal tour back to the hotel for breakfast and visit Agra fort.

Agra Fort - Agra Fort is the former imperial residence of the Mughal Dynasty located in Agra, India. It is also a UNESCO World Heritage site. After lunch depart from Agra to Jaipur around 4 hrs drive on the way visit Capital City Fatehpur Sikri.

Fatehpur Sikri- Fatehpur Sikri is a city in the Agra District of Uttar Pradesh, India. Previously the city's name was Vijaypur Sikari, of the Sikarwar Rajput clan; the later city was founded in 1569 by the Emperor on the way Also you can visit The Chand Baori is a stepwell built over a thousand years ago in the Abhaneri village of Rajasthan.It is one of the largest stepwells in the world. Evening check in Jaipur Hotel. overnight rest in Jaipur hotel.

Amber Fort - Amer Fort is located in Amer, a town with an area of 4 square kilometres located 11 kilometres from Jaipur, Rajasthan state, India. Located high on a hill, it is the principal tourist attraction in the Jaipur area. (also enjoy Elephant Ride at Amber Fort).

City Palace - City Palace, Jaipur, which includes the Chandra Mahal and Mubarak Mahal palaces and other buildings, is a palace complex in Jaipur.

Hawa Mahal (Wind Palace)- Hawa Mahal is a palace in Jaipur, India, so named because it was essentially a high screen wall built so the women of the royal household could observe street festivals while unseen from the outside.

Jal Mahal (Water Palace) - is located in middle of the Man Sagar Lake. it were renovated and enlarged in the 18th century by Maharaja Jai singh II.

End your Golden Triangle Tour 3 Days with our good wishes.

How much time does the 3 Days Golden Triangle Tour From Delhi take?

Probably, no other theme tour besides Golden Triangle Tour can provide you with a full-fledged glimpse of India’s royal and cultural heritage in such a short span. The journey covers three most popular tourist d Read more ➤

Amazing Golden Triangle Tour with Mandawa is a must do - a visit to India cannot be complete without the Golden Triangle tour of Agra, Jaipur and Delhi. The grandeur of Taj, the Old Delhi City charm and the ethnic and Read more ➤

The Delhi to Badrinath Dham - 6 Days Private Tour takes you one of the holiest places, that stands at a height of 3133mts and is on the banks of the holy river Alaknanda. It is bounded by some beautiful Himalayan peaks Read more ➤

The Majestic Kashmir Tour Package takes you to explore amazing Kashmir in 6 days. Kashmir is the place, where you can witness the flawless art of nature, heavenly beauty spread everywhere. The beautiful lakes, snow Read more ➤

The Golden Triangle India Tour which includes three historical cities named Delhi, Jaipur, and Agra is the most attractive destination in South Asia. And those who have the love for history and religion must plan a tour Read more ➤

Benefit from personalized attention on this 4-day private tour of the Golden Triangle. Visit the top attractions of Jaipur, Agra, and Delhi at your own pace, focusing on things that interest you and your private group. Read more ➤

Maharashtra is a beautiful state with a unique culture and heritage. This tour will let you explore some very nice spots that are very famous. You will be amazed by the natural beauty of Lonavala, Khandala. Visit Sundar Read more ➤

A characteristic feature of Aurangabad is the historic gates, built during the period of Aurangzeb, which gives the town its sobriquet – ‘The City of Gates’. Boasting multifarious ancient monuments including the world Read more ➤

Mumbai and Goa are wonderful places to plan a holiday while enjoying tropical weather. Mumbai is the most developed cities in India on the other hand Goa is popularly known as ‘city of beaches’. These two popular des Read more ➤