Temples & Wildlife Tour of Gujarat tour will begin with pick up from Ahmedabad airport. Visit the heritage city monuments & museum, then proceed to Little Rann Of Kutch-Wild Ass Sanctuary via visiting the UNESCO WHS at Patan & Modhera. Next drive to Rajkot the princely region of Gurarat. C

Temples & Wildlife Tour of Gujarat tour will begin with pick up from Ahmedabad airport. Visit the heritage city monuments & museum, then proceed to Little Rann Of Kutch-Wild Ass Sanctuary via visiting the UNESCO WHS at Patan & Modhera. Next drive to Rajkot the princely region of Gurarat. Continue to Dwaraka & Somnath to visit magnificent temples and pilgrimage centre of Hindus. Next enjoy lion safari in Sasan Gir National Park, visit ancient fortified city Junagadh and regal cities Rajkot. Visit once of the largest temple compleax at Palitana & archaeological remains of a Harappa Port-Town at Lothal. Accompanied tour guide and transport will remain on disposal at your service. 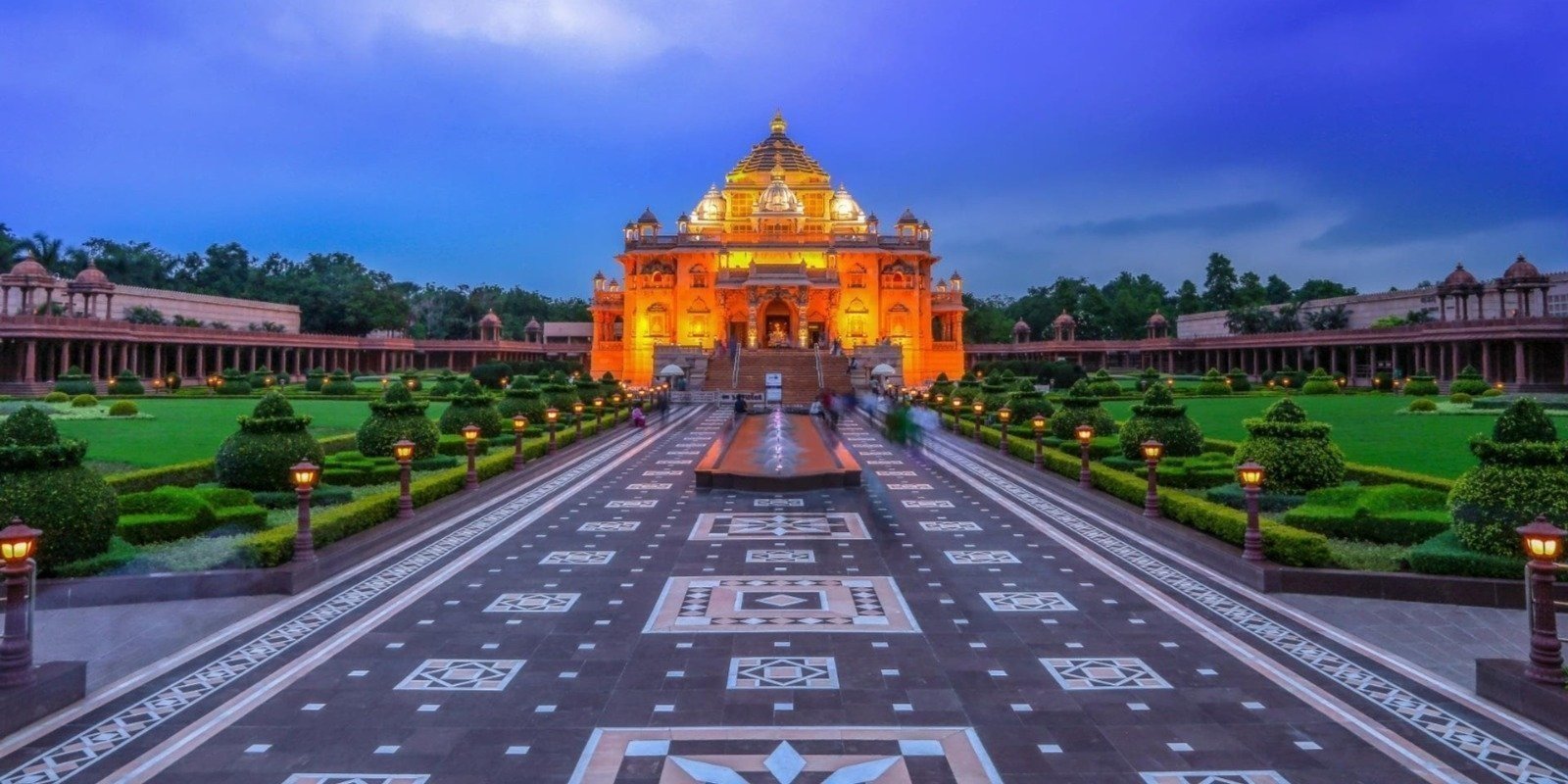 On arrival at Ahmedabad airport assistance & transfer to hotel check in. Rest time free to relax. Overnight at hotel.

City tour of Ahmedabad. Visit Hatheesing Jain Temple established in 1850 by Seth Hatheesing a rich Jain merchant, the temple is dedicated to 15th Jain Tirthankar Dharamnath. Bhadra Fort a beautiful monument that is famous for its intricate carvings, pattern works and beautiful frescos suits. Located in the middle of lush greenery the huge 44 acre Fort got its name from the Bhadrakali Temple that it houses. Sabarmati Ashram once the residence of Mahatma Gandhi located on the tranquil and serene stretch of Sabarmati River. The museum is one of the most interesting sections of the ashram as it has on display some of Gandhi`s personal letters and photographs. Shaking Minarets one of the most intriguing architectural wonders & an unsolvable mystery that the world has ever seen. VECHAAR Utensils Museum it house an elaborate collection of utensils ranging from hundreds of years back to the current times. Kite Museum in the premises of Sanskar Kendra the museum had an elaborate display of about 125 uniquely carved kites including mirror embroidered kites, block print kites and Japanese kites such as Rokuku. Overnight at hotel.

Drive to Dasada via visiting Modhera Sun Temple a Hindu temple dedicated to the solar deity Surya built wetbeen 1026-27 CE during the reign of Bhima I of the Chaulukya dynasty. The temple complex has three components: Gudhamandapa, the shrine hall; Sabhamandapa, the assembly hall and Kunda, the reservoir. The halls have intricately carved exterior and pillars. The reservoir has steps to reach the bottom and numerous small shrines. Rani ki Vav 11th century Solanki era step well built by the Queen Udayamati & Karna in memory of her husband Bhima I. The stepwell is designed as an inverted temple highlighting the sanctity of water, divided into seven levels of stairs with sculptural panels, more than 500 principal sculptures and over a thousand minor ones combine religious, mythological and secular imagery. And Panchasara Jain Temples, more than 100 Jain temples with exquisite domes & sacred carvings on the walls built by king Vanraj Chavada around 746 CE.

Continue drive to Dasada check in & overnight at hotel.

Early morning safari in Little Rann of Kutch a unique landscapes of its kind in the entire world with an unending possibility of exploration. The present saline desert of the Little Rann of Kutch is believed to have been shallow sea. Little Rann of Kutch is the only haven on earth for endemic Asiatic Wild Ass. Known for its speed, the wild ass lives in herds led by stallions and survived by migrating between the grassy bets through the season, in search of food. Sanctuary is also home to 32 other species of mammals such as chinkara, two types of desert fox, jackals, caracals, nilgais, Indian wolves, blackbucks, and striped hyenas along with 350 different species of birds, including the common crane, pelican and the lesser flamingo. Interestingly, the Little Rann gets a fair number of winged visitors in the winter months. Among these, the ceraneous vulture comes from Egypt, the common and demoiselle cranes arrive from Siberia, the blue-tailed bee-eater visits from Europe, and the houbara bustard of Iran and Iraq are the most commonly sighted birds here. Also, the sanctuary is home to a sizeable population of Rabari and Bharwad tribes.

Drive to Dwarka check in at hotel.

Later visit Dwarkadhish temple dedicated to the god Krishna. The main shrine of the five storied building, supported by 72 pillars, is known as Jagat Mandir. Archaeological findings suggest it to be 2000 - 2200 years old. The original temple believed to have been built by Krishna`s grandson, Vajranabha, over the hari-griha, was enlarged in the 15th- 16th century. Swami Narayan Temple, located very close to the beautiful seashore and the Dwarkadish temple is a relatively new structure, with intricate architecture expressed through sculptures and embossed wall work. Nageshwar Temple, located on the route between Dwarka city and Beyt Dwarka Island, it enshrined one of the 12 Jyothirlingas in an underground sanctum. Rukhmini Devi Temple, a 12th-century remnant having some evident architectural marvels of the time through its mural carvings and other structures. Rest time free to relax on the beach. Overnight at hotel.

Drive to Somnath, enroute Visit Porbandar the Haveli where Gandhi was born on Oct 2, 1869. The room where he was born has been preserved as it is, and has a stark look. A part of the house has now been converted into a museum and called the Kirti Mandir. Open from 9am to 12pm and again from 3pm to 6pm. the birth place of Mahatma Gandhi.

Continue drive to Somnath and check in at hotel. Later visit Somnath Temple believed to have been built in gold by the moon god Soma, in silver by the sun god Ravi, in wood by Krishna and in stone by the Solanki Rajputs in the 11th century. The present temple built in 1951, is the seventh reconstruction on the original site. Tales of its riches attracted a series of invasions, but each time the temple was invaded, it was restored to its original glory by devout Hindu worshipers. Paanch Pandav Caves situated in the Lalghati where Pandav spent time during the term of their exile. Suraj Mandir the architecture features many animal figurines like lions, and huge elephant trunks. Overnight at hotel.

Drive to Sasan Gir National Park and check in at resort. Gypsy safari in Gir Wildlife Sanctuary sprawling in an area of 1424 sq kms. Gir forest is the only place in the world, outside Africa, where the lion can be seen in its natural habitat. Other predators are panther & hyena. Sambhar, Chital, Blue Bull, Chinkara and four horned antelope are found here along with the bear and the long tailed langur. Gir is also one of the finest bird sanctuaries. Some of the typical birds of Gir are the crested serpent eagle, crested hawk eagle, brown fish owl, king vulture, jungle quail, paradise flycatcher, pygmy woodpecker, hard headed oriole etc. Another attraction is a crocodile farm developed in the forest. Overnight at hotel.

Later drive to Rajkot via visiting Junagadh an ancient fortified city rich in myth and legend, at the foot of the temple-studded Girnar Hill. The Girnar Hills are a holy sanctuary to the Jains. Ashoka inscribed 14 edicts on a huge boulder at Mt. Girnar peak. Also visit Uperkot fort an inaccessible fortress at Junagadh. And Gondal the former princely state ruled by the Jadeja Rajput clan. Visit Navlakha Palace one of the oldest and most beautiful palaces situated on riverbank.

As per flight schedule transfer to Rajkot airport or drive to Ahmedabad and drop off to airport.

How much time does the Temples & Wildlife Tour of Gujarat take?